Israel has announced an unprecedented rise of goods smuggling through its border into the besieged Gaza Strip, despite the Israeli security measures at the crossings. 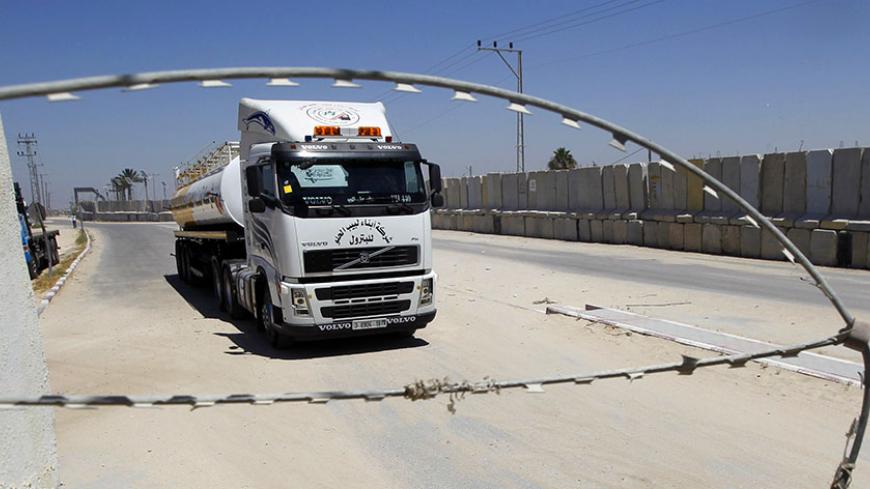 The Israeli siege on the Gaza Strip has now entered its 10th year. Israel had imposed a blockade in mid-2006 on the small enclave after the Hamas movement won the Palestinian legislative elections in January of that year. Ever since, the Palestinians’ humanitarian situation has been going downhill. Unemployment rates surpassed 43%, the gross domestic product dropped 24%, poverty rates reached 39% and food insecurity amounted to 47%.

On Jan. 15, the Israeli Defense Ministry announced a 165% increase of goods in 2016 — compared with 2015 — that are smuggled from Israel into the Gaza Strip through the Kerem Shalom crossing in southern Gaza and the Erez crossing in the north. In 2016, 175,000 commercial trucks entered Gaza, 1,126 of which were caught smuggling goods, such as cameras, communication devices, iron rods and aluminum tubes, which Israel has banned from entering Gaza since 2008.

Maher al-Tabbaa, the media director at the Gaza Chamber of Commerce, told Al-Monitor, “The figures Israel announced regarding the smuggled goods into Gaza are exaggerated. The truth is, every once in a while some individual cases of smuggling occur. Israel imposed strict security measures [on the crossings] and severe sanctions against Palestinian merchants who [are caught] trying to smuggle goods. These measures include long prison sentences and costly fines.”

In January 2016, Israeli NGO Gisha issued a list of over 60 items banned from entering the Gaza Strip under the pretext of the products’ dual use (civilian and military), such as coriander, wood, electrical uninterruptible power supplies, castor oil, fertilizers, X-ray imaging devices, heavy cranes, tubes, batteries and metal welding material.

In this context, Yohai Offer, an Israeli military correspondent for the NRG news site, wrote a Jan. 15 article that to curb the increase of smuggled goods the army must stop the drivers who are transporting them and impose stricter security measures on the borders between Israel and Gaza. He quoted Gen. Kamil Abu Rukun, the head of the crossings authority at the Israeli Ministry of Defense, as saying that a monitoring system has been introduced at crossings to closely monitor the entry of goods into the Gaza Strip.

Atef Adwan, a Hamas parliamentarian and the head of the Economic Committee of the Palestinian Legislative Council, told Al-Monitor, “Some goods banned by Israel are sometimes smuggled through the Israeli crossings into the Gaza Strip and merchants sell them in Gaza for double the price and make more profit. Meanwhile, the Palestinian resistance takes advantage of any [security] gap at the crossings to smuggle in the materials it needs from Israel.”

Adwan said that smuggling activities had increased at the Israeli border crossings after Egypt closed the Rafah crossing and began monitoring the tunnels between Gaza and the Sinai Peninsula, in addition to Israel adding more items to the list of banned materials.

On Jan. 9, the Israeli army announced that in collaboration with the Shin Bet and the Israeli police, it arrested two Palestinian merchants who were trying to smuggle dual-use materials into Gaza by hiding them in electrical appliances such as TVs, refrigerators and washing machines. Investigations also revealed that they were involved in several smuggling operations in 2016 when they managed to smuggle cameras and communication wires to Izz ad-Din al-Qassam Brigades, Hamas’ military wing.

In May 2016, the Shin Bet said it had foiled the smuggling of several tons of sulfuric acid and ammonium chloride hidden in paint containers at the Kerem Shalom crossing. These materials are banned from entering Gaza since they can be used as raw materials to produce TNT explosives.

Mouin Rajab, an economics professor at Al-Azhar University in Gaza, told Al-Monitor, “Israel is exploiting the ongoing smuggling attempts through its crossings to justify the blockade it is still imposing on the Gaza Strip. As a result, commercial and economic projects in Gaza remained on hold [as they lacked] the needed metal and chemical materials banned by Israel under the pretext of dual use. As long as the Israeli security services are the source of figures declared by Israel regarding the alleged smuggling attempts, this will remain a clear attempt to consolidate the blockade on Gaza.”

On Jan. 21, the Israeli army said new devices are now being used at the border crossings to detect the smuggling of banned materials and goods into Gaza, in addition to innovative screening mechanisms, advanced technologies and methods to examine roads.

A Palestinian security official in Gaza told Al-Monitor on condition of anonymity, “Regardless of Israel’s statistics on smuggling attempts, it [Israel] would be wrong to think that Palestinians would give in to the siege. Palestinians have serious intentions to break the blockade by any means necessary.”

On Jan. 1, Israeli human rights group B'Tselem pointed out that Israel has yet to find a mechanism to achieve a balance between its security requirements and the needs of Gazans in a way that would not disrupt the entry of goods through the crossings between Israel and Gaza. In this context, Israel should also extend the crossings’ working hours and increase manpower.

Omar Shaban, the founder of PalThink for Strategic Studies, told Al-Monitor, “The figures announced by Israel regarding smuggling attempts are reasonable under the continued siege and in light of the Palestinians’ need for goods that are smuggled despite the tightened Israeli security measures. Regarding the goods labeled by Israel as dual-use materials, some goods enter Gaza for construction purposes but end up being used for other purposes that Israel deems dangerous.”

Although Israel has put a 100% effort into imposing strict security measures to prevent the smuggling of so-called dangerous materials into the Gaza Strip, their success may never reach 100%. This is particularly true because the ever-extending list of banned goods harms economic activity and commercial projects in Gaza, which could prompt some Palestinian merchants and armed groups to find a way around the Israeli measures and acquire the goods they need.