Amid Benjamin Netanyahu’s election victory and their deeply entrenched divisions, the Palestinians seem to have little chance to stand firm in the face of Israeli plans to annex parts of the West Bank. 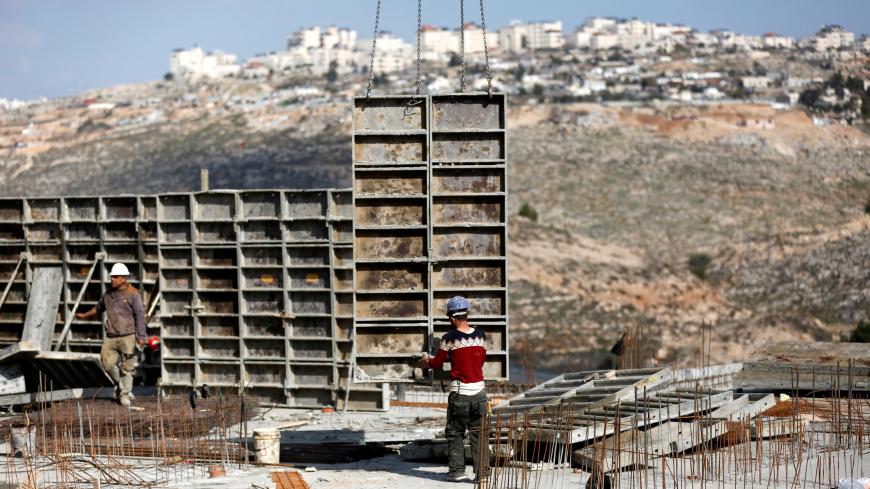 Labourers work at a construction site in the Israeli settlement of Ramot in an area of the occupied West Bank that Israel annexed to Jerusalem, Jan. 22, 2017. - REUTERS/Ronen Zvulun

RAMALLAH, West Bank — The victory of Israeli Prime Minister Benjamin Netanyahu’s Likud Party in the April 9 elections comes much to the dismay of the Palestinian Authority (PA) and leaves it with a lot to lose.

Following initial election results, PLO Secretary General Saeb Erekat tweeted April 9, "Israelis have voted to maintain the status quo, as far as the occupation of Palestine. They voted for apartheid, and [for] an endless occupation. Exit polls show that only 18 members of the 120-seat Knesset support two states [based] on the 1967 borders."

The Israeli media discussed and analyzed the PA’s dissatisfaction with Netanyahu’s victory, though some PA officials claimed to have no favorite candidate.

In an article published by the Jerusalem Center for Public Affairs, Israeli journalist Yoni Ben Menachem wrote that the PA was deeply disappointed and frustrated with the results of the Israeli elections, as Palestinian President Mahmoud Abbas fears that Netanyahu will impose Israeli sovereignty over parts of the West Bank.

Ben Menachem quoted undisclosed Palestinian officials as saying they have no practical means to prevent such a measure.

Three days before the elections, Netanyahu told Channel 12 that he would start extending Israeli sovereignty over the West Bank and annex West Bank settlements if he was reelected. He said he had discussed the issue with representatives of US President Donald Trump.

The PA is also wary of Trump’s peace plan for the Middle East, which he is likely to reveal once Netanyahu finishes forming his government coalition.

“The Palestinian leadership saw the Israeli election results coming, based on its reading of Israeli society, which is biased toward the right wing. These elections have proved that Israel has completely eliminated the two-state solution,” PLO Executive Committee member Hanan Ashrawi told Al-Monitor.

“Our priority now is to strengthen the steadfastness of the Palestinian people on their land as Israel seeks to control the land and get rid of its people because of the demographic danger they pose. Palestinians ought to take a major step at the internal level, which is to achieve unity and end division.”

She added that the leadership will address the international community, Palestine’s allies and its friends around the world and take steps within the framework of international law and its institutions.

The PA still has a card up its sleeve, Ashrawi said: finally insisting on implementing the long-delayed decisions of the PLO central and national councils. This, however, remains far-fetched for the near future.

In March 2015, the PLO Central Council decided to define relations with Israel politically and economically and stop all security coordination with it. In October 2018, the council reiterated the same decision, but it still remains unimplemented. Meanwhile, the Palestinian National Council had decided in May 2018 to direct the PLO Executive Committee to stop recognizing Israel until Israel recognizes the State of Palestine according to 1967 borders — another decision that has yet to be carried out.

“Several decisions have been made to this effect, but they can't be applied all at once. Implementing these decisions requires preparation and debate at the level of the leadership,” Ashrawi said.

Nabil Shaath, Abbas’ adviser for international relations, told Al-Monitor, “The implementation of these decisions is subject to the president’s political assessments. The PA is considering all options and alternatives in the face of Israel.”

Palestinians now must "galvanize efforts at the popular and international levels,” Shaath said, noting that Abbas has always said the Oslo Accords and all agreements signed with Israel will be revisited, given Israel’s failure to abide by them. Shaath has said the PA will look at the US peace plan that Trump is preparing to announce, but expects to find it unsatisfactory.

He added that Israel's election results were expected and denied claims that the PA had a favored candidate in the elections.

“The Israeli elections mean nothing to us. The competition between the Israeli parties was on who can oppress the Palestinians more. There were no fundamental differences between candidates, especially since there is no Israeli left wing,” Shaath said.

However, Ahmed Rafiq Awad, a political science professor at Al-Quds University, told Al-Monitor, “Netanyahu was the PA's least-favorite candidate, as his election program was based on ending the two-state solution and promoting settlements. This would further exacerbate the already-tense situation and cause a confrontation, which the PA is not ready for.”

He added, “The PA’s options are now limited. Its reactions to the Israeli policies have always been delayed, in the absence of a clear strategy and its dependency on the toothless Arab regimes [when it comes to the Palestinian issue], mediators and the international community." All these efforts have proved futile.

Ghassan al-Khatib, director of the Jerusalem Media and Communications Center and a former PA planning minister, told Al-Monitor, “The PA will have a hard time dealing with Israel, not because the latter seems to have abandoned the peace process and bilateral diplomatic relations, but because Palestinians have lost many of their strong points. The Arab situation is fragile and the division is deeper than ever, and all the while the US continues to take a clearly hostile stance [against Palestinians].”

He added, “The PA ought to focus on ending the division, strengthen the Palestinians’ steadfastness and ready them to face future pressures that will rise at all levels. Meanwhile, there should be efforts to galvanize the international community into taking action in favor of Palestinians, while focusing on international law and work at the popular level, mainly through the boycott, divestment, and sanctions movement" against Israel.

Netanyahu’s threats to annex parts of the West Bank and intensify settlement-building are the coup de grace to the possibility of establishing a Palestinian state. This places the PA in the embarrassing predicament of having to prove the viability of its existence.