Ashrawi’s exit of the PLO sign of organization’s demise

Senior Palestinian official Hanan Ashrawi resigned from her post in the PLO’s Executive Committee, amid reports that she was frustrated over the lone decision-making process in the Palestinian organization. 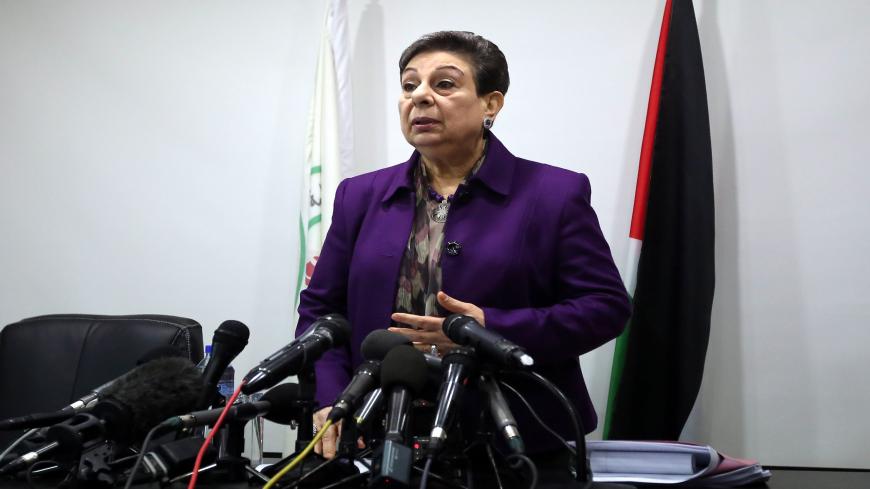 PLO Executive Committe member Hanan Ashrawi arrives for a press conference, a day after a verdict of a New York court was issued finding the Palestinian leadership responsible for six deadly attacks in Jerusalem that killed Americans, Ramallah, the West Bank, Feb. 24, 2015.

The resignation of Hanan Ashrawi from the PLO’s Executive Committee appears to reflect the demise of a movement that has been hollowed out from the inside by the single rule of the 85-year-old Palestinian president who was elected in 2005 and whose leadership has not been publicly reconfirmed since.

Ashrawi articulated in her resignation letter and an accompanying cover letter that she held a Nov. 24 meeting with President Mahmoud Abbas, during which she verbally declared her intention to leave the post. Both agreed to make the issue public at the end of the year, she said, adding that a written letter of resignation was delivered two days later, on Nov. 26.

But as news of the resignation became known, Ashrawi felt frustrated with some of the leaks that claimed her decision was due to her age (she is 74), health (she contracted the coronavirus) and even a desire for some unknown position, all of which Ashrawi vehemently denied in her statement and on YouTube.

Upon a demand for an answer, Abbas asked Ashrawi to wait until the convening of the Palestine National Council (PNC), saying that it was the council that elected her and that her resignation should be submitted to this top Palestinian body. Ashrawi refused to wait and stated that her resignation is effective immediately. In her public statements, Ashrawi insisted that she respects internal PLO bylaws, but said, “I consider that the resignation has taken effect.” Ashrawi reaffirmed that she would continue to serve Palestine, in an informal or official capacity.

Al-Monitor has learned from sources in Ramallah that Ashrawi had expressed to friends her frustration about the Palestinian decision-making process. Several sources said on condition of anonymity that Ashrawi told a colleague that the PLO’s Executive Committee was not even involved in any of the important decisions recently. She said that PLO Secretary Saeb Erekat was, at least, taking people into consideration and briefing the committee on all important issues. The Palestinian president had decided unilaterally to boycott Israel in June and also decided to rescind that decision and restore security coordination with Israel without coordination or meetings with the committee members.

Hamadeh Faraneh, a member of the PNC and a popular political commentator, told Al-Monitor that Ashrawi was elected by the PNC and that the fate of her resignation must be decided by the council that elected her.

But Faraneh said that politically, Ashrawi’s resignation is a “protest against the PLO and the Palestinian National Authority,” noting that the PLO’s Executive Committee is not holding regular meetings and therefore the PLO is not carrying out its responsibility.

Faraneh noted that Ashrawi represents — along with Faisal Husseini and others — the leaders of the first intifada, noting, “She is also independent and therefore she reflects the largest body among Palestinians who are independent; she is the only woman in the PLO’s Executive Committee and also a Christian, and so I think that this is a big slap to the ruling Palestinian class.”

Hazem Kawasmi, a member of the National Assembly of Independents, told Al-Monitor that Ashrawi should have resigned from the PLO’s Executive Committee a long time ago, because the PLO has lost its meaning and will not be important until there are real reforms and realignment to its role. “Ashrawi is respected by Palestinians and Arabs. Many intellectuals in the Arab world were hoping that she would not be silent about the absence of reform. I don’t believe her resignation is connected to the decision of Abbas but rather to personal decisions regarding the place and role of the PLO,” he said.

James Zogby, president of the Arab American Institute, told Al-Monitor that for three decades, Ashrawi has been a leading principled voice of the Palestinian people. “When the world first met her during the Madrid peace conference, it was she who helped to define Palestinian aspirations and give clarity to the Palestinian message. Her resignation appears to be a call for the renewal of an organization that desperately needs an overhaul. But unlike others who are a part only of the Palestinian past, Hanan must also be seen as part of the Palestinian future.“

Khalil Jahshan, executive director of the Arab Center Washington DC, told Al-Monitor that he was not surprised by Ashrawi’s exit. “In her letter of resignation, she makes it clear that her act is being done out of principle and not for personal gain.” Jahshan believes that her decision “at this juncture is important because Palestinian politics are paralyzed and in need of change that can bring in new blood and diversity and variety.”

Jahshan complained that the Ramallah-based leadership is not doing anything to prepare for changes within its rank or as a result of US political changes. He said that Palestinians should not take the changes in Washington, which are positive, for granted. “We need to always ask where is the Palestinian strategy or Palestinian plan.”

Jahshan, who has known and worked with Ashrawi for over 30 years, said that Abbas’ lack of sharing in decision-making was “the straw that broke the camel’s back. The legitimacy of the PLO and its institutions will not be restored while all decisions are being taken by one person. She served Palestine when she was not in the office and she will do that out of the PLO office.”

Audeh Quawas, a newly appointed member of the Jordanian Senate who watches closely Palestinian affairs, told Al-Monitor that it is clear the decisions taken by a single person in the Palestinian presidency are hurting the PLO. “The decisions by the presidency alone have left a negative effect on the reconciliation efforts and elections, which seemed to be succeeding.”

Quawas argued that “Ashrawi left the ship before it sank so that she would not be held responsible.”