While the Sept. 3 meeting between major Palestinian faction leaders in Ramallah and Beirut was an unusual accomplishment in itself, many observers are cautious about crucial obstacles to change. 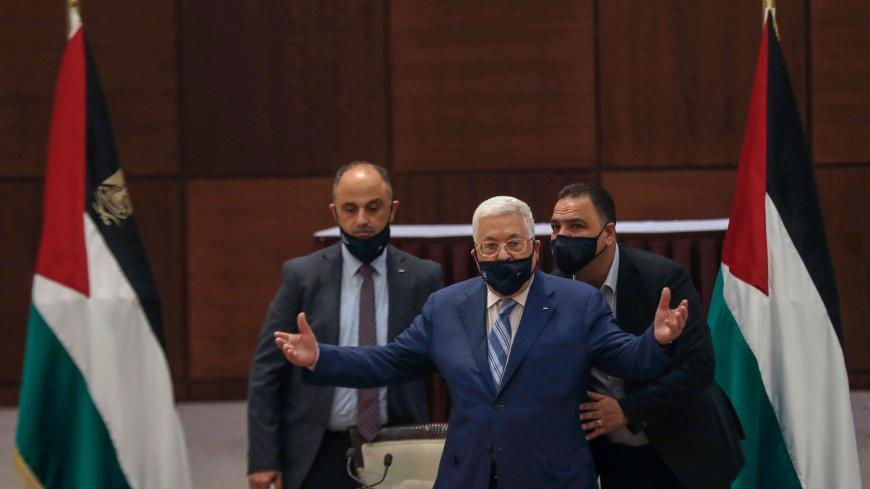 President Mahmoud Abbas (C) wears a protective mask as he attends a meeting of the Palestinian leadership to discuss the United Arab Emirates' deal to normalize relations with Israel, in Ramallah in the Israeli-occupied West Bank, on Aug. 18, 2020. - MOHAMAD TOROKMAN/AFP via Getty Images

An unprecedented meeting of the Palestinian leadership took place Sept. 3 in a sign of a possible reconciliation and agreement on a national strategy. The local heads of Palestinian factions met in the Ramallah presidential headquarters with leaders residing abroad joining in by video conference from Beirut. President Mahmoud Abbas, who called for the meeting, arrived more powerful than he has been in years due to his steadfast opposition to unilateral Israeli and US plans, as well as the US-brokered normalization agreement between the United Arab Emirates and Israel.

Fatah's Jibril Rajoub, who led the recent reconciliation efforts with Hamas, read out the final communique, which committed the assembled leaders to developing a unified national strategy for peaceful popular resistance and reconciliation. Committees focused on strategy, PLO rehabilitation and reconciliation were formed and given deadlines to present recommendations. Abbas — who vowed to be supportive of all recommendations — said that the results of this effort will be presented to the Palestine Central Committee within five weeks.

Hanan Ashrawi, a member of the PLO’s executive committee who attended the meeting in Ramallah, told Al-Monitor that decisions made there are important but that their implementation requires political will. “We need elections as the mechanism to cause change and to build a unifying democratic process. Such a process can provide opportunities for young and female Palestinians to reach decision-making positions and to tackle the dangers and challenges while carrying out a badly needed corrective effort.”

Meanwhile, Oraib Rantawi, director of the Al Quds Center for Political Studies, told Al-Monitor that the chances of a quick breakthrough are slim. “There is a network of interests … that will delay reconciliation. As to the ability to create and lead a robust peaceful resistance movement, this will require a lot of change. Fatah is weak and has become an administrative party, while Hamas is only concerned with the lifting of the siege. In the long term, however, there is hope in the young people and their movements, which are forcing their way to the surface.”

Ali Jarbawi, a former minister of planning and administrative development and currently a political science professor at Birzeit University in the West Bank, said that there isn’t much faith in the current efforts to reach reconciliation. “Peaceful popular resistance requires the ability to move people and to gain their trust, and this is not present and can’t come by a decision. It requires people to trust their leadership and the viability of the national project.”

Anees Sweidan, head of Arab relations in the PLO, told Al-Monitor that Palestinians are facing an unprecedented attack from the United States and Israel with the unfortunate cooperation of some Arab states. However, he said, “I am optimistic about a genuine breakthrough with the reconciliation effort if the current mood of putting aside personal ambitions and desires and fighting for Palestine is given priority.”

Khalil Jahshan, director of the Arab Center Washington DC, told Al-Monitor that as a Palestinian he finds the unity effort “interesting and important,” but as an analyst, he said he is skeptical.

“This is a significant step at this challenging time. I hope that it goes beyond the symbolic statement and can be translated into action that brings factions together to help the Palestinian people to meet the abnormal challenge that is caused by the declaration of war that the [Donald] Trump administration and Israel’s [Prime Minister Benjamin] Netanyahu has initiated against Palestinians and the Palestinian cause,” he said.

Jahshan said that he has a feeling of deja vu. “The differences between the multiple factions is so wide that it is difficult to reconcile that Fatah is unable to share power and the opposition is unable to govern. [This is a] serious dilemma and I am not sure that these meetings will motivate the leadership to change. And here change is significant … deep change of mindset and philosophy and the way they act."

He stressed that the leaders "can’t continue to play according to the old rules" and questioned whether they would be willing to "pay the price" of change, "which might include people leaving the scene."

"They need to [stop operating] as factions and create parties," he concluded.

Jamal Dajani, a former spokesman of the Palestinian Prime Ministry, told Al-Monitor that the meeting offered hope that the internal Palestinian division could end. “The road to unity is long and will take more than five weeks. I hope I am wrong and a strong strategy will be reached, because Palestinians inside and outside are in sore need of unified leadership.”

Dima Khatib, a journalist active in the Latin American Palestinian diaspora, told Al-Monitor that the meeting is an opportunity that must be seized.

“While I don’t believe in the present leadership, I realize that the UAE normalization [deal] has awakened us all to agree together on what we need and how we want to get there," said Khatib. The journalist, who was critical that very few women and youth were present in the meeting, called for worldwide elections of the Palestine National Council so as to directly involve Palestinians in the diaspora. Khatib said, “We need new leadership blood — especially women and young people — and we need a clear vision, strategy and a mechanism to accomplish it. There are lots of talented Palestinians in all areas and we need to find a way to engage all of them."