What is more important for Palestinians today: the PLO or the State of Palestine? 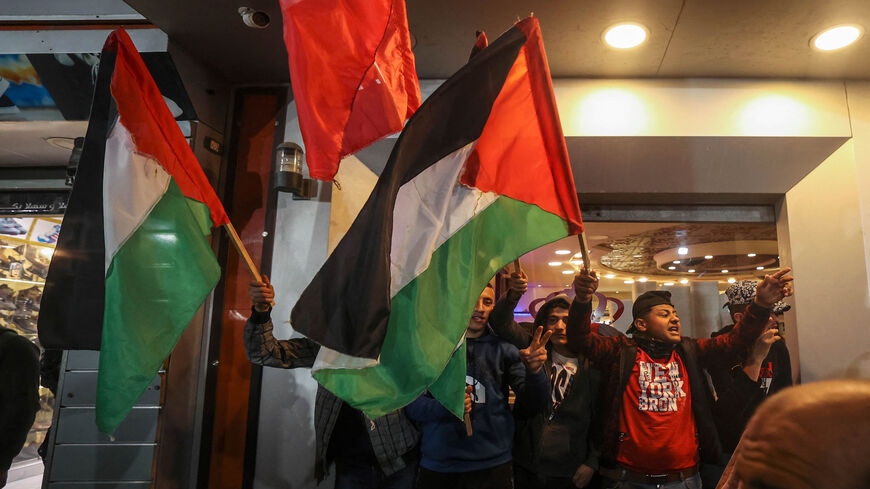 Palestinian supporters of the Popular Front for the Liberation of Palestine hold national flags during a rally to protest the meeting in Ramallah of the PLO Central Committee, Gaza City, Gaza Strip, Feb. 6, 2022. - Mahmud Hams/AFP via Getty Images

A post-central committee scandal appears to have opened up a deep wound in Palestinian internal politics. The controversy was initiated when a draft of a presidential decree turning the PLO into an organ of the State of Palestine became public Feb. 19. The Ramallah-based presidential leadership quickly put out the storm that erupted by claiming that this was a mere recommendation by a legal adviser and that it was never issued nor was it published in the official gazette.

The reason for the storm is that the proposed idea reflects the fact that what was a leading revolutionary movement has become an organ of a yet-to-be-declared state.

Hamadeh Faraneh, member of the PLO’s National Council, told Al-Monitor that the real problem is financial. “The PLO used to have serious funds that it was able to pass on to factions and activists, but now the PLO offices and state are funded by the Palestinian government.”

Hamadeh said that rich Arab countries like Saudi Arabia used to collect a 5% tax from Palestinian workers and then matched that amount twice. But this practice has stopped and the Saudis are no longer making such donations to the PLO. If anything, Saudi Arabia and others are now exclusively giving money to United Nations agencies working in Palestine to development projects there. A small amount of money is tranferred to the Palestinian government, but no money is being donated to the PLO.

Najeeb Qadoumi, member of the Palestine National Council, told Al-Monitor that the PLO is the home of all Palestinians and "it is the tent under which the Palestinian people of all colors and backgrounds get their shade." He added, “The PLO converted a refugee population looking for food and shelter from the world via UNRWA to a revolutionary people waiting for the day of return. It is the PLO that embodies and delivered the state with a flag, a national anthem and an identity.”

Much of the problem is connected to the deep divisions among Palestinians, with a major faction like Hamas as well as Islamic Jihad that have never joined the PLO. Attempts at involving them are etched in various reconciliation agreements and committees formed to set the criteria and work out the distribution of power in a reformed PLO, but that has yet to happen.

Political commentator Lamis Andoni told Al-Monitor that the problems are both within the PLO and within some of its own factions, as well as between the PLO and Hamas. “Many things have happened recently reflected in the fact that there is no strong will to reconcile. All efforts to reconcile the factions failed because the big factions Fatah and Hamas are not interested,” she said.

Andoni is worried that even though the decree was never issued, the idea behind it represents the mentality of the leadership that is looking for ways to make compromises to Israel and the United States.

Qadoumi noted it was the PLO that created the Palestinian National Authority, which is considered an arm of the PLO. "So the PLO is the root and all others are branches; a branch can’t replace a root,” he said.

Farneh believes that the idea of making the PLO a part of the State of Palestine is unacceptable. “Half the Palestinians live in exile and the diaspora and the other half on the ground in Palestine. You can’t eliminate an organization that embodies the right of return and Palestinian nationalism just because the PLO is no longer able to pay the bills,” he said.

Many independent Palestinian analysts argue that the real challenge is to revitalize the PLO and not dismiss it as unimportant.

An activist from Jerusalem, now living abroad, told Al-Monitor on anonymity that both need to engage in a deep self-reflection. “Both the PLO and the Palestinian Authority are failing miserably in carrying the Palestinian national torch. The PA is doing Israel’s dirty work while the PLO around the world has been hit by the same division in Palestine; thus Palestinians living abroad are unable to act as one. It is also unclear if the idea is connected to the secretive succession battle of who will replace [Palestinian President Mahmoud] Abbas or if it is a reflection of the desires of the United States and Israel to once and for all bury the idea of the right of return that the PLO most certainly represents.”

The PLO-State of Palestine debate is badly needed after nearly 30 years since the Oslo Accord, which helped establish a handicapped entity in Palestine. There are realities on the ground today that can’t be ignored. Neither side of this conflict are willing to deal with the realities, but prefer to talk about imagined dreams and unattainable goals.

Ali Jarbawi, political science professor at Birzeit University, scoffed at all the discussions, saying that for him all these issues fall in the realm of imagination. “As Palestinians, we are imagining things. There is no state on the land and there is no PLO. Both are virtual issues and therefore the idea of discussing the relationship between the Palestinian state and the PLO is nothing more than engaging with further delusion.”