Hamadeh Faraneh, a PNC and PCC member, revealed an Egyptian plan to achieve Palestinian unity between Fatah and Hamas, among other goals, and talks details about this in an interview with Al-Monitor. 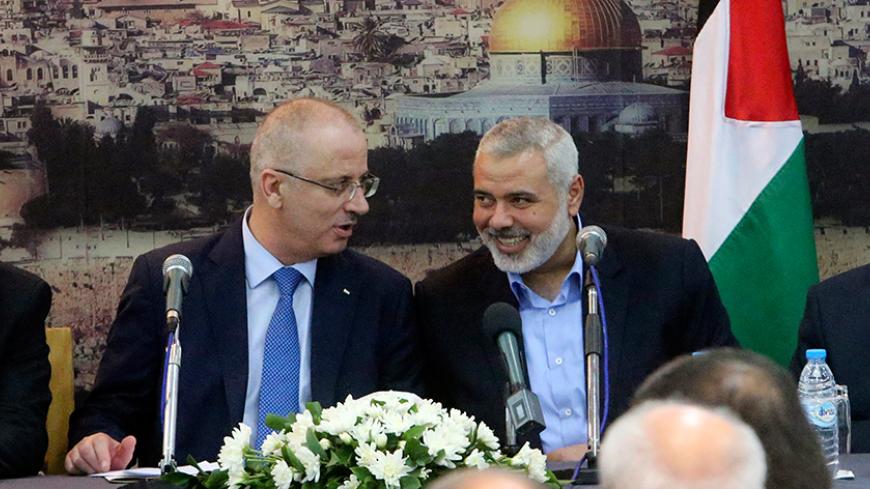 Hamadeh Faraneh, member of the Palestinian National Council (PNC), caused a firestorm Nov. 30 by revealing that Egypt has been working with the Palestinian president on advancing a four-point road map that includes internal unity within Fatah, reconciliation with Hamas, reconstruction of the Palestine Liberation Organization and general elections.

Faraneh, a former Jordanian member of parliament and who is also a member of the Palestinian Central Council (PCC) and is privy to internal Palestinian politics, spoke to Al-Monitor in his home in Amman about the Egyptian initiative and the reaction of various Palestinian groups to it. Reaction was mixed to an article seen as attempting to encourage the Palestinian leadership to face reality. “No one has denied the details of the contents [of the Ad-Dustour article Faraneh wrote Nov. 30],” he said.

“Some have called me saying it is true, but that it shouldn’t have been published,” Faraneh told Al-Monitor. “Egyptian officials were unhappy, although they were appreciative of the [comprehensive nature of the article]. What I did is put everyone to face their own reality in a strong way.”

The Palestinian activist also said that executing the agreement on reopening the Rafah crossing is more dependent on the Palestinian leadership in Ramallah proceeding with the Egyptian road map than on Hamas. “Egyptians will only reopen the Rafah crossing once the [four-point] road map is applied in the order that they have suggested. The problem in Hamas is that there are two parties: one wanting to share power, while the other wants to monopolize it.”

Al-Monitor:  What are the main points of the Egyptian road map for Palestine?

Faraneh:  The Egyptian plan that was transmitted to the Palestinian president by the head of the Egyptian intelligence, Wael Safatawi, at the end of October is made up of four points that must be applied consequentially. The four points are: the need for internal unity within the Fatah movement; agreement to political and programming policies between Fatah and Hamas; re-establishment of the PLO based on unity, pluralism, agreed political program and accepted appropriate manner of resistance; and parliamentary and presidential elections in Gaza and the West Bank.

Al-Monitor:  What was the Palestinian reaction to this plan?

Faraneh:  When Palestinian President Mahmoud Abbas visited Egypt on Nov. 9 and met separately with Mohammed Dahlan and President Abdel Fattah al-Sisi, he reportedly told the Egyptian president that any idea from Egypt is welcomed, but asked for some time to get the idea approved by the Fatah institutions. Later, Fatah spokesman Ahmad Assaf told the press that there is no basis to the news about the Egyptian road map. Then a statement [issued] after a meeting of Fatah’s Central Committee on Nov. 15 noted that Dahlan is no longer part of the discussion as he was fired from the movement.

Al-Monitor:  What was the reaction of the Egyptians to these statements?

Faraneh:  The Egyptians were obviously unhappy but have acted as if they didn’t hear these statements and they are still awaiting the official reaction of Palestinian President Abbas.

Al-Monitor:  You published some of this information in the Jordanian daily Ad-Dustour on Nov. 30. What was the reaction to it?

Faraneh:  While there was a firestorm after the publication, no one has denied the details of the contents. Some have called me saying it is true but that it shouldn’t have been published. Egyptian officials also were unhappy although they were appreciative of the way I published it. What I did is put everyone to face their own reality in a strong way. This Egyptian initiative has come at a time that no one is paying attention to the Palestinian cause. This initiative is logical and can produce an effective result if adapted.

Al-Monitor:  At the same time, news from Egypt spread about an agreement on reopening the Rafah border crossing. Is there a connection between the initiative and the reopening of Rafah?

Faraneh:  Egyptians will only reopen the Rafah crossing once the road map is applied in the order that they have suggested. Egyptians consider Hamas an extension of the banned Muslim Brotherhood and that it has a negative effect on Egyptian security, yet they are willing to cooperate for the Palestinian cause in which Hamas can participate in the running of Gaza along with the PLO. The problem in Hamas is that there are two parties: one wanting to share, the other wanting to monopolize power. In all cases the reopening of Rafah is not dependent on Hamas, but on the application of the Egyptian road map.

Al-Monitor:  Do you know if Arab and international governments support this Egyptian plan?

Faraneh:  There might be opposition to it from Turkey, Qatar and Iran and of course Israel, but this doesn’t deter the Egyptians who see in solving this problem a plus for Egypt.

Al-Monitor:  What about the popular uprising — whether you call it habbeh or intifada? Does it influence the possibility of speeding up this Egyptian plan?

Faraneh:  I don’t call what is happening a popular intifada because it is not popular; I call it a youth intifada. The problem is that Hamas is inciting against Fatah in the West Bank to embarrass them, while Fatah is also inciting in Gaza to push the youth to come close to the borders to embarrass Hamas. Instead of supporting the resistance, they [both parties] are shaming each other. Fatah is clearly committed to the security cooperation with Israel, and Hamas has signed two indirect understandings with Israel through Egypt — on Nov. 21, 2012, during President Mohammed Morsi's era and on Aug. 26, 2014, under President Sisi’s administration. In both understandings, the Qatari representative in Gaza, Mohammad al-Ammadi, shuttled between Gaza and Tel Aviv to reach those agreements.