Palestinians may be on verge of charting new political path

It appears that President Mahmoud Abbas wants to convene the Palestinian National Council, after a hiatus of more than 20 years, which would allow the Palestinian movement to move toward a change in leadership. 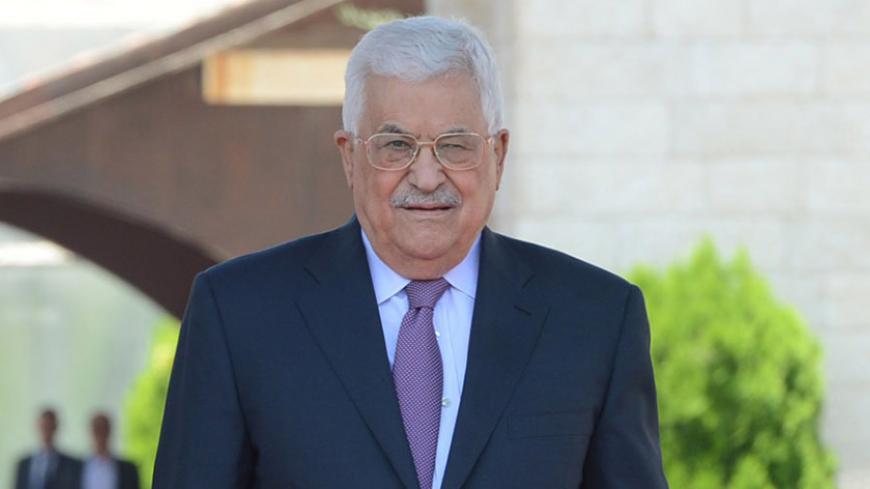 At a time of political indecisiveness and the absence of a vision or agreed-upon strategy, the Palestine Liberation Organization (PLO) is seriously considering calling a full session of the Palestinian National Council (PNC), its decision-making body. At an Aug. 9 meeting, Fatah's Central Committee recommended convening the PNC “with the participation of all parties,” a clear reference to Hamas. Such a session could bring new blood to the organization.

A full PNC session convened with a quorum would allow members to approve a new political direction for the PLO and elect members to the PLO’s Central Committee and Executive Committee. Such changes would set the stage for a leadership transition. Palestinian President and PLO Chairman Mahmoud Abbas, 82, who is having health issues, has repeatedly said that he will not run for president in future general elections.

The PLO is the highest body in Palestinian politics, and its highest institution is the PNC. The PLO established the Palestinian Authority (PA) as a provision stemming from the 1993 Palestinian-Israeli Memorandum of Understanding and the 1995 Interim Agreement — the Oslo Accords — signed with Israel. The PA is therefore subject to the PLO's decisions.

PNC member Hamadeh Faraneh explained to Al-Monitor, “Only full [PNC] sessions can elect the various institutions of the organization. The last time the PNC met in full session, it was held in Gaza, in 1996.”

The absence of PNC meetings is the result of some logistical, but mostly political considerations linked to a shift in power from the PLO in the diaspora to the PLO leadership in Ramallah. The resumption of PNC sessions can be seen as a reversal of this two-decade-old shift, since the Oslo Accords.

Kayed Miari, founder of the Nablus-based Witness Center for Citizen’s Rights and Social Development, told Al-Monitor that convening the PNC is a positive move. “It can rejuvenate the institutions of the PLO and its role, which has been declining for some time now,” he said.

Abbas rallied his Fatah movement on Aug. 15, when he met with nearly 1,500 Fatah activists in Ramallah. The official Palestinian news agency Wafa reported, “Abbas called Fatah the ‘initiator’ of the Palestinian national unity project. The movement is the best hope for the establishment of an independent Palestinian state.”

The PNC has traditionally set the PLO's long-term strategies, approved political directions and elected the leaders charged with carrying out the movement's strategy. According to Article 12 of the PNC bylaws, decisions are approved by a simple majority, after convening a quorum of two-thirds of the membership.

Writing in the Jordanian daily Ad-Dustour Aug. 13, Palestinian-Jordanian analyst Oraib Rantawi called on Abbas to “do it,” in reference to talk of a PNC session, and offered suggestions for next steps.

“I suggest that a date be announced some six months in advance in order to allow for the election of the delegates to a new PNC,” Rantawi wrote. “Delegates from all over the world should be given a chance to elect members, and those who delay such delegate selections should publicly be held responsible.”

The last full PNC session drew 669 elected members. Membership is distributed geographically around the world in proportion to the size of Palestinian communities. There are also default members who represent professional bodies — such as the journalists, women’s and student unions — and representatives of the armed factions of the PLO. A senior PLO official who requested anonymity told Al-Monitor that there are two major obstacles to convening the PNC: ensuring a quorum and achieving national unity.

A number of PLO nationalists are unlikely to agree to attend a PNC session in Ramallah because of their objection to having to enter Palestine with an Israeli permit or because they are wanted by Israel and could end up in an Israeli jail. While this number is not large, it could mean that Abbas would have to convene a meeting in Amman or another Arab capital.

Furthermore, Abbas has angered some of the left-wing factions, among them the Popular Front for the Liberation of Palestine (PFLP). In July, Abbas was accused of having verbally attacked a PFLP activist, Omar Shehadeh, during a meeting of the Palestinian leadership. Palestinian media reported Muhana Rabah, a member of the PFLP's political bureau, saying that the verbal attack was followed by a physical attack by a presidential guard on July 24.

That said, the more difficult reconciliation will be with Hamas. While mending relations with Hamas would be advantageous for Abbas and to Palestinian national unity, it is not necessary for a quorum. The 74 pro-Hamas members of the Palestinian Legislative Council (PLC) elected in 2006 automatically became members of the PNC. The PLC in Gaza and the West Bank is considered a geographical region for purposes of representation, so legislators elected to the PLC are automatically PNC members. If new PLC elections take place, the newly elected legislators will take their place in the PNC.

As noted, the PNC, often referred to as the Palestinian parliament in exile, has not been held for more than 21 years in part because of the creation of the PA and corresponding PLC. A convening of the PNC would therefore signal that the era that began with the Oslo Accords might be coming to a slow end. While it is unlikely that all the institutions connected with Oslo will be dissolved, the 23rd session of the PNC will be expected to chart a new political path toward Palestinian statehood and bring in new blood entrusted to carry out the new strategy.