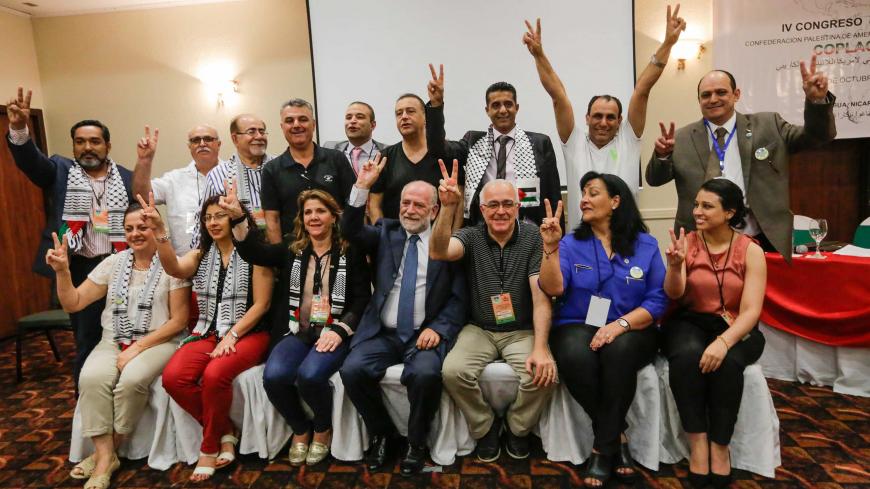 Rafael Antonio Araya Masry (C, front), new president of the Palestinian Confederation of Latin America and the Caribbean, poses with members of the organization after being elected in Managua, Nicaragua, Oct. 22, 2017. - INTI OCON/AFP/Getty Images

The Palestine Liberation Organization (PLO) has stepped up activities around the world to revive its diaspora constituencies, which had in recent years lost faith in the organization and its leadership.

Palestinian President Mahmoud Abbas sent Husam Zomlot, his star ambassador and representative in Washington, to represent him at the Congress of the Confederation of Palestinian Communities in Latin America and the Caribbean (COPLAC). The gathering, held Oct. 20-22 in the Nicaraguan capital of Managua, was attended by the host country’s foreign minister, Denis Moncada Colindres, and Palestinian representatives from across Latin America.

The COPLAC meeting comes after bitter disputes over the independence of diaspora institutions and the shifting of diaspora affairs from the PLO to the Palestinian Ministry of Foreign and Diaspora Affairs. The switch took effect May 24.

Zomlot, who heads the PLO delegation in Washington, told Al-Monitor that he was impressed by the character and depth of the Palestinians in Latin America. “Even though they have been fully integrated into their new communities, they are enthusiastically committed to Palestine and support the Palestinian cause.”

COPLAC was founded in 1984 as a statement that the Palestinians' aspiration for liberty and freedom would not die even though the PLO had been forced to leave Lebanon following Israel's 1982 invasion and occupation, Zomlot said. The purpose of COPLAC's establishment was to unify Palestinian communities and support the Palestinian cause.

At the conference, Zomlot read a speech on behalf of Abbas, hailing Latin American and Caribbean Palestinians. “Your federation is one of the leading inspirations to the PLO, the sole legitimate representative of the Palestinian people,” he said. According to Wafa, the official Palestinian news agency, Abbas also told the more than 120 Palestinian representatives from Argentina, Bolivia, Brazil, Chile, Colombia, El Salvador, Guatemala, Honduras, Panama, Peru, Mexico, Nicaragua and Venezuela, “We want to support you as you renew your independence and your representation and continue working through COPLAC to reflect your allegiance to your homeland and the just cause of Palestine.”

Zomlot described the COPLAC meeting to Al-Monitor as lively. “The participants fought hard to reform the rules and bylaws, but it was all done in a democratic and civilized fashion.” Among the changes agreed to was for a 17-member committee to replace the previous three-person Brazil-based leadership.

“Now all the countries are represented at large by at least one person; for instance, Chile — which has over 400,000 citizens of Palestinian origin — might have more than one representative because of the [number] of Palestinians there,” Zomlot said. Seventeen countries in Latin America and the Caribbean have considerable Palestinian constituencies. According to Zomlot, the energy from the meeting will give a big push to the PLO and the goal of Palestinian liberation.

In addition to making an appearance at the Nicaraguan gathering, Palestinian officials have been reviving relations with diaspora communities in other parts of the world. PLO officials have joined diaspora communities in Glasgow and in London to actively work to unify Palestinians and improve their lobbying abilities, in particular on the occasion of the centennial of the Balfour Declaration.

Palestinians living in Denmark met in the nearby Swedish city of Uppsala to better organize themselves and to support some eight Palestinian Danish candidates competing in nationwide municipal elections in Denmark scheduled to take place Nov. 21. The event was highlighted by calls for Palestinian communities to cooperate with the Palestinian government.

Anees Sweidan, director general of PLO external relations, told Al-Monitor that diaspora communities worldwide have recently become much more active due in part to the success of the reconciliation efforts between Fatah and Hamas. “As Palestinian unity in the homeland takes root, diaspora communities around the world are discovering that what unites them is much bigger than the small differences they might have,” Sweidan said.

While Palestinians in the diaspora are organizing, the Abbas administration is making a serious effort to reform and unite the PLO, said Sweidan. He explained, “If things go as planned, we should be able to hold parliamentary elections in Palestine in 2018, and this will pave the way to holding a reformed and united session of the Palestinian National Council.”

Zomlot gives credit to the reconciliation for reviving Palestinian unity around the world but noted that a lot of work was being put in before the recently announced breakthrough. “For my part, in the United States, I have taken the instructions from President Abbas to heart, and I have made the goal of unifying Palestinian communities in the United States my top priority, spending nearly 80% of my time traveling to meet with our communities.”

Since assuming his post in Washington in April 2017, Zomlot has visited Palestinian American communities in Chicago, Detroit, Houston, New Jersey, New York and San Francisco. “We are working hard to help unify our community from the bottom up,” he said. “We are working on an inclusive effort that is not based on factions or geographical origins but on unifying the communities in support of the Palestinian national cause.”

While the efforts of Palestinian ambassadors and PLO officials appear to be producing results, it will take some time to bridge the deep divide that split the Palestinians for the last 10 years. Reunification of the people and the possibility of holding a unified PLO meeting in 2018 would put pressure on Israel and its supporters to come to the table as well as strengthen the bargaining power of Palestinian negotiators.