By imposing the so-called blue tax on industrial diesel before it is sold in Gaza, the national consensus government in Ramallah is effectively paralyzing the only electrical power plant in the Gaza Strip. 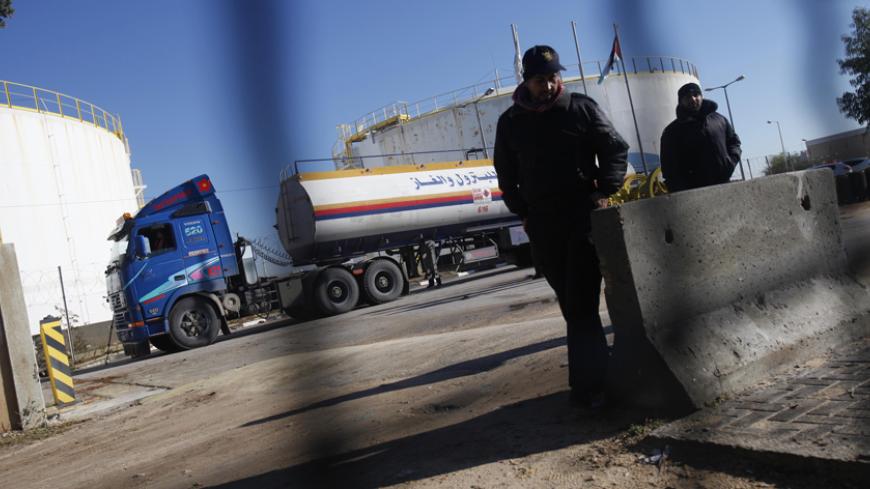 GAZA CITY, Gaza Strip — Political conflicts are impeding solving the various crises in the Gaza Strip, such as the unpaid wages of government employees, the closing of the Rafah crossing and the purchase of industrial fuel for Gaza’s power plant. The consensus government in Ramallah is imposing a tax — dubbed the “blue tax” — on industrial diesel before it is sold in Gaza.

The deputy director of the Palestinian Energy Authority (PEA) in the Gaza Strip, Fathi al-Sheikh Khalil, called for the complete cancellation of this tax on the power plant’s diesel, thus allowing the plant to operate for several additional hours. However, President of the Palestinian Petroleum Agency in Ramallah Fuad Shobaki refused this option and said fuel is stored at Gaza’s power plant.

According to the Economic Protocol Agreement, which was signed in Paris in 1994 and incorporated into the Oslo Accord, Israel demanded the price difference of the fuel consumed by Palestinians and that consumed by Israelis not to exceed 15%. Hence, the Palestinian Authority (PA) imposed the blue tax to make up for the difference.

Al-Monitor obtained a list of the value of industrial diesel that was bought from the Palestinian Petroleum Agency, which is affiliated with the consensus government in Ramallah. The price of 1 liter (0.26 gallon) of diesel at the beginning of last year ranged between 5.60 and 5.80 Israeli shekels (around $1.40), reaching 3.80 shekels ($0.90) in November and December.

The source said the blue tax is not the only tax imposed on the power plant diesel, as there is also value added tax that amounts to 18% and the tax difference of 3%.

Shobaki told Al-Monitor over the phone, “We only implement. We follow the Cabinet’s decision regarding the blue tax and we often reduce it to 50%, or remove it completely when it comes to Gaza.”

He said sometimes the tax is not completely removed because the taxes on oil products are an essential income for the government in Ramallah — especially in light of the recent financial crises it suffered. Shobaki also explained that in addition, they have to pay 65 million shekels per month (roughly $16 million) in return for Gaza’s power consumption from Israel and Egypt.

He stressed the PEA does not interfere with resolutions issued by the Cabinet, although it is possible for it to advise the Cabinet to reduce the tax. He said, however, “If it were up to me, I would not exempt the Gaza Strip from the blue tax because the power plant is a private company and it can buy fuel with the money it collects from electricity bills.”

He added, “When the occupation shelled the power plant during the last aggression, we found out that there were 3 million liters [800,000 gallons] of industrial diesel stored in the plant.”

Meanwhile, Sheikh Khalil told Al-Monitor that collecting payments in the Gaza Strip is limited to less than 23% of Gaza’s residents, totaling $4 million per month. This is not enough to buy fuel, due to the increasing taxes by the consensus government in Ramallah, and to secure the necessary fuel for the power plant around $10 million per month is required.

He said that the Qatari grant last year was about $62 million, half of which went to the unity government in Ramallah because it imposed the blue tax at 100%. He added, “We are paying the fuel price and the taxes imposed on it twice. It was reduced after the recent aggression on Gaza, but they have now reinstated it.”

Sheikh Khalil demanded the complete cancellation of the blue tax, explaining that such a decision can be made by the Cabinet in Ramallah in seconds, considering that the electricity crisis in Gaza is primarily political.

“When there is a grant for the purchase of fuel, the consensus government imposes the full value of the blue tax. For example, the $10 million from Qatar, for the month of January, was allocated on the grounds of being sufficient to run the power plant for a month. However, because of the tax it was sufficient for just two weeks,” he added.

The electricity crisis had begun to worsen in July 2013, when the Egyptian authorities decided to destroy the tunnels on its border with the southern Gaza Strip. Industrial diesel used to be transported through these tunnels to feed the power plant, at a low price — around 1.50 shekels ($0.30) per liter.

According to a PEA report, of which Al-Monitor obtained a copy, the proposed electricity plan to reach eight hours of operation a day — which is the best plan provided by the PEA since Israeli warplanes shelled the plant in June 2006 — needs two generators to be running, using 300,000 liters (79,250 gallons) of industrial diesel per day. However, due to the high value of industrial diesel and the lack of fuel needed to operate the plant, the hours decreased to six a day and sometimes even four.

In the same context, PEA President Omar Kettaneh told Al-Monitor over the phone from Ramallah that the authority is demanding the cancellation of the blue tax on the Gaza Strip, but at the same time, the institution knows what the government's capacity is and the losses it has suffered. He explained that the cancellation needs to be decided upon by 24 ministers, and that certain ministers always object to this.

Overall, Kettaneh stressed that all these pending issues, including the blue tax, are due to the political conflict between the West Bank and the Gaza Strip. “The fact that the consensus government does not have the power to properly operate in Gaza is impeding the resolution of several issues, such as the electricity crisis,” he said.