Egypt comes to rescue as Israel cuts off Gaza gas

When Israel cut Gaza's fuel supply, Egypt stepped up to keep the Strip running, though shortages are still overwhelming. 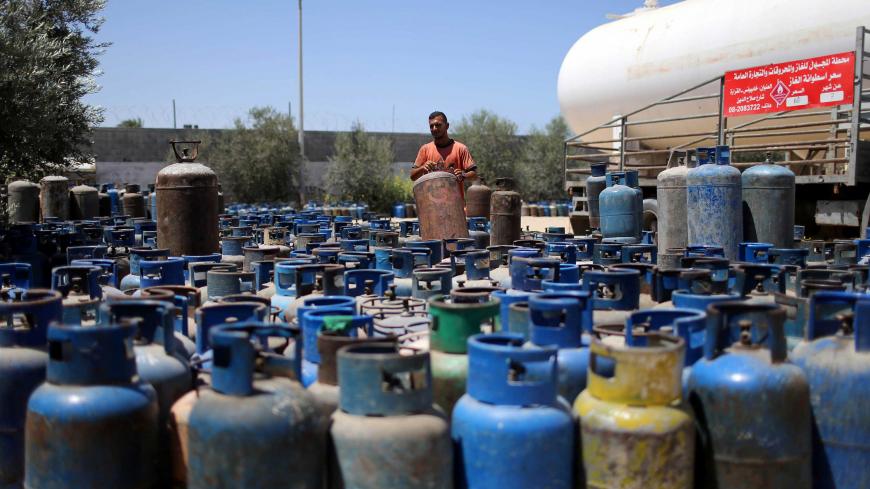 Khalil Shakafa, director of the General Directorate of Petroleum in Gaza, announced that Egypt had exported a shipment of 250 tons of propane (liquefied petroleum gas) via the Rafah crossing. He added that trucks carrying Egyptian gas will continue to enter the Gaza Strip while technical arrangements for regular deliveries are finalized.

Israeli Defense Minister Avigdor Liberman announced Aug. 1 that Israel was cutting off its fuel and natural gas supplies to the Strip through the Kerem Shalom crossing in response to the continued attacks by flaming kites from Gaza.

The Kerem Shalom crossing is the only commercial crossing for residents of the Strip, and Israel is tightening its grip on the entry and exit of goods, including fuel and natural gas.

Gaza’s monthly propane needs are about 8,000 tons a month. Israel allows the entry of between 5,000 to 6,000 tons, creating a monthly deficit of about 2,000 to 3,000 tons, according to the General Directorate of Petroleum.

Well-informed Palestinian sources in Gaza told Al-Monitor on condition of anonymity that Egypt has taken other measures to alleviate the people's difficult living conditions, such as allowing Palestinians to travel to Saudi Arabia for pilgrimage, which has been forbidden since 2014.

The sources said Cairo agreed Aug. 5 to export Egyptian gas to Gaza and keep the Rafah crossing open to facilitate travel for Palestinians.

Osama Nofal, director general of the Planning and Policy Department at the Ministry of Economy in Gaza, confirmed that Gaza needs regular and sustainable imports of Egyptian gas to cover its deficit.

Nofal said the Palestinian Authority is the “ultimate loser” in the equation. Gaza’s Finance Ministry is expected to collect the taxes on Egyptian gas, costing the PA the $26 million per month it collected from fuel introduced to Gaza.

The ministry said in an Aug. 6 press statement that Egyptian gas is purchased at international prices, adding the costs of transportation and insurance once it reaches Gaza. The ministry added that the Gaza government takes in about three shekels (81 cents) on each gas cylinder, “including the technical and administrative costs, as well as the costs of monitoring and distribution to gas stations."

The Finance Ministry's tax on fuel derivatives such as propane sold in the Palestinian market, known as the “blue tax,” is one of the world's highest. The tax comes as part of the Paris Protocol that regulates economic relations between Israel and Palestine.

Samir Hamadeh, head of the gas committee of the Gas Company Owners Association in Gaza, told Al-Monitor that the price of one kilogram (0.26 gallon) of Egyptian propane will be similar to the Israeli price of five shekels, about $1.50.

Hamadeh said the gas is being supplied in coordination with Egyptian authorities and the Finance Ministry in Gaza, and technical arrangements are being made to provide more Egyptian gas tankers.

The Palestinian sources said the Gaza Strip's imports of Egyptian gas started under an agreement reached during a June 26 visit to Cairo by a Gaza Strip government delegation. The group met with Egyptian officials to discuss implementing economic projects for Gaza, including a free trade zone on the border.

Yusuf al-Kayali, Gaza's deputy finance minister and a member of the government delegation, said in a July 11 press statement that the visit was “fruitful and successful,” as the Egyptian side agreed to provide basic supplies for Gaza residents including gasoline, diesel and propane.

Shakafa said Egyptian gas won't serve as a substitute for Israeli fuel and that Gaza still needs 2,000 to 3,000 tons more propane per month.

Gazans hope the Egyptian gas will lead to greater economic cooperation with Egypt.

Meanwhile, they dream of extracting their own gas from the Gaza Marine field, which lies 37 kilometers (23 miles) off the coast of the Gaza Strip. The field, discovered in the 1990s, contains an estimated trillion cubic feet of natural gas. The development of such a field would generate $2 billion in annual revenues to Palestine and end the need to import gas. Work on it is expected to start in 2021, provided Israel voices no objections.