Why did Egypt withhold gas from Gaza?

Some argue that Egypt halted its gas imports to the Gaza Strip because of Hamas leader Ismail Haniyeh’s visit to Iran. 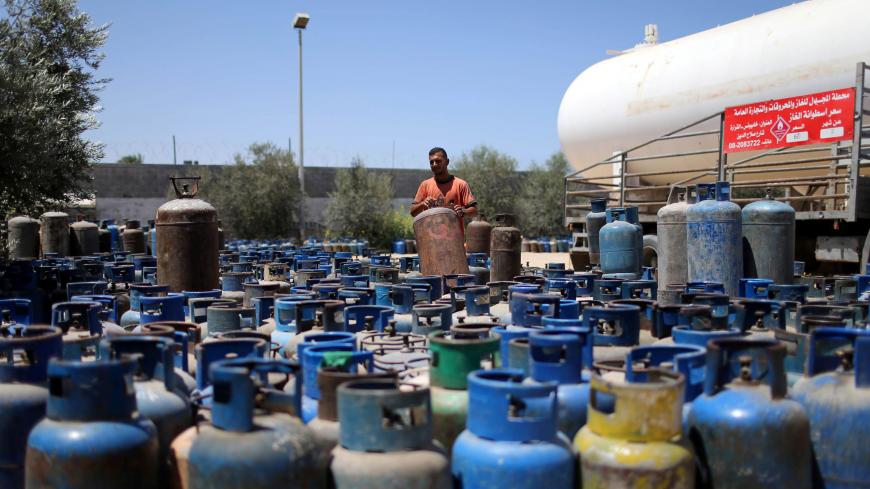 GAZA CITY, Gaza Strip — An unprecedented crisis hit the Gaza Strip this month when cooking gas became unavailable at filling stations after it stopped entering the Strip from Egypt on Jan. 1 for over 10 days. This was due to technical difficulties and bad weather conditions, the Ministry of Finance in Gaza said.

On Jan. 20, Egypt resumed its imports and allowed 10 trucks to enter, followed by 23 others on Jan. 23, promising to double the quantity over the coming days.

But some believe this was an Egyptian attempt to put more pressure on Gaza. The besieged enclave has been relying for many years on gas coming from Egypt in addition to limited quantities entering from the Israeli side.

On Jan. 17, Israeli newspaper Yedioth Ahronoth reported that Egypt unilaterally began raising the prices of goods transported to the Gaza Strip through the Rafah crossing, including cooking gas and car tires.

Abdel Karim Abdel Aal, director of the Gaza-based Abdel Aal Company, which imports tires from Egypt, told Al-Monitor there was a slight increase in prices due to the costs of transport, supply, customs, examination and securing the route to the Gaza Strip. The price increase has nothing to do with any political aspects, he added.

The Gas Stations Owners Association in Gaza stated Jan. 20 that the Gaza Strip faced an unprecedented gas crisis due to Egypt’s move and that Gaza lacks a strategic gas reserve.

An official in the Ministry of Finance in Gaza told the local newspaper Felesteen on Jan. 20 that the declared reason for gas not entering from Israel and Egypt was the air pressure fluctuations, in addition to other technical reasons, denying that there are problems with Egypt regarding the introduction of gas because of the pricing. He said there is an agreement between the two parties on a slight increase in the price of a ton of gas, adding that the citizens would not even notice it.

Al-Monitor tried to contact the trade and crossings department at the Ministry of National Economy and the Gas Stations Owners Association but to no avail.

Freelance economic analyst Nouhad Nashwan told Al-Monitor that Gaza has been relying on Egypt for 70% of its imports of basic commodities, namely cement, fuel and cooking gas. He said the current gas crisis is the first since Egypt started exporting gas to Gaza in August 2018 after Israel cut off its supplies.

“The cooking gas imports of the Petroleum Authority in Gaza from Egypt reach 5,000 tons per month. The local monthly needs amount to 7,000 tons, so the 2,000 tons are imported from the Israeli side through the Karam Abu Salem crossing,” Nashwan said.

Nashwan added that the Egyptian side requested to increase the price by $160 per ton, which the Petroleum Authority in Gaza rejected. In turn, Egypt cut supplies for several days.

Speaking about Egypt’s motives to raise prices, Nashwan explained that in addition to a slight rise in the global price of gas, Egypt wanted to send a political message to Hamas. Egypt was unpleased when Hamas politburo chief Ismail Haniyeh visited Iran Jan. 6 to express condolences for the death of Qasem Soleimani, the commander of Iran's Islamic Revolutionary Guard Corps' Quds Force, who was assassinated by a US drone strike Jan. 3.

Khalil al-Hayya, a member of Hamas’ political bureau, denied any tension with Egypt over Hamas' ties with Iran, stressing that Hamas rejects any alternative to Egypt in managing Palestinian national issues. He said Hamas agrees with Egypt on multiple matters and policies, denying that Haniyeh's visit to Iran had any link to the gas crisis between Cairo and Gaza. "The visit is for purely commercial reasons," he affirmed.

Meanwhile, political analyst close to Hamas and former editor of the local Felesteen newspaper Mustafa al-Sawaf told Al-Monitor gas supplies were cut because the Egyptian side wanted to increase the price by $160 per ton, which Gaza traders rejected in light of the economic crisis.

“The two parties reached a compromise and the issue was resolved,” Sawaf noted.

Nashwan said an agreement was reached for an increase of approximately $100 per ton, adding, “I think the crisis will end — but at the expense of citizens, as the Petroleum Authority in Gaza will gradually increase prices to make up for the additional money it pays to Egypt until the price of a 12-kiloliter gas cylinder stabilizes at 60 shekels ($17.14), as is the case in the West Bank, which relies on Israeli gas.”

Speaking about Egypt's attempt to pressure the Palestinian side after Haniyeh’s visit to Iran, Sawaf did not rule out the possibility of Egypt having unannounced, noncommercial reasons for increasing prices, stressing at the same time that Gaza is exhausted and cannot bear more pressure.

For his part, economic analyst and economics professor at the University of Al-Asraa in Gaza Amin Abu Aisha told Al-Monitor that the gas crisis may have been a Palestinian plot in preparation for increasing taxes on goods imported from Egypt, as the Hamas government has a tendency to maximize tax revenues through goods that it imports from that country.