The Hamas movement has been forced to borrow from the local banks to fund the salaries of its 45,000 employees amid low local revenues, costly subsidies and declining Qatari financial grants. 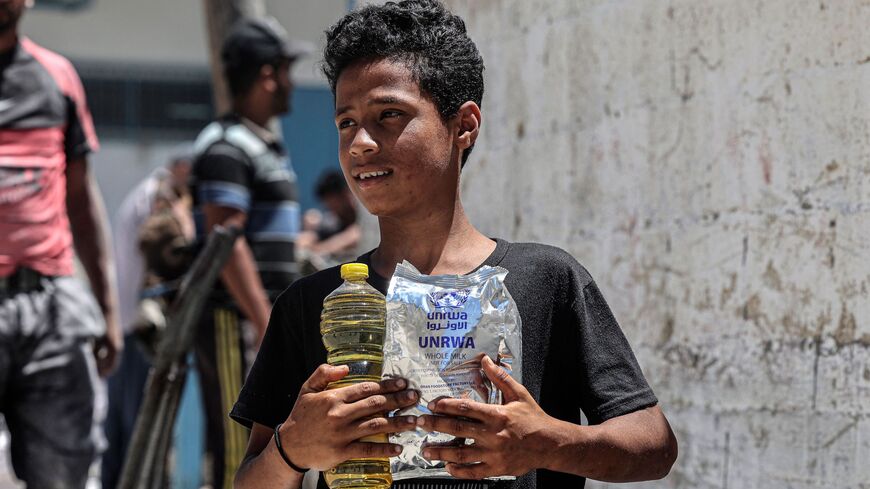 Palestinians receive their monthly food rations from the United Nations Relief and Works Agency warehouse in Khan Yunis in the southern Gaza Strip on June 14, 2022. - SAID KHATIB/AFP via Getty Images

GAZA CITY, Gaza Strip — The Hamas-run Ministry of Finance is battling a new financial crisis amid declining fiscal revenues and soaring prices of most imported consumer goods in the wake of the Russian war on Ukraine.

Hamas has cut taxes on and even subsidized fuel and cooking gas supplies from Egypt, paying the price difference after their global hike. These costs and shrinking tax revenues have drained the treasury.

Issam al-Daalis, head of the Governing Committee for the Management of Gaza Issues, headed to Cairo in early June in an effort to boost bilateral trade exchange and improve revenue. In a statement upon his return from Cairo on June 8, Daalis said that the visit gone well.

The first signs of the financial crisis in Gaza loomed in early June, when the Finance Ministry was forced to take out a loan from the local Islamic National Bank and the Palestine Production Bank to pay the salaries of its 45,000 employees in the Gaza Strip.

A source in the Ministry of Finance in Gaza revealed to Al-Monitor that the monthly employee salary bill amounts to 100 million shekels ($29.411 million). These funds, he explained, would be secured in previous years through tax revenues and the Qatari financial grant of $30 million per month, a third of this grant was allocated to payroll.

The source, who requested anonymity, clarified that the Finance Ministry has been subsidizing some goods, such as fuel and cooking gas, whose prices soared globally in the past three months. Hamas has spent 17 million shekels ($5 million) to subsidized them in addition to a number of other commodities, he added.

The source explained that the financial crisis is partly due to the declining Qatari grant. In 2021, Qatar allocated $10 million per month to support the Gaza Strip, but this amount has now dropped below $5 million.

Since the beginning of June, the ministry has been forced to increase its subsidies on some goods, particularly fuel and cooking gas, due to the financial crisis.

A fact sheet issued by Al Mezan Center for Human Rights June 14 on the effects of the Israeli siege read, “The poverty and unemployment rates stood at 53% and 47%, respectively, while the food insecurity rate was 64%.” Despite Hamas' subsidies, the increase in the price of bread has made the majority of residents reliant on flour distributed by UNRWA.

Salama Marouf, head of the government's media office in Gaza, told Al-Monitor that with the start of the global price hikes, the Ministry of Finance developed an austerity plan to subsidize these goods while also reducing tax collection. “The ministry tried to secure the funds needed by government institutions, most notably operating expenses for ministries at about 30 million shekels per month ($8.823 million), in addition to the 100 million shekels in salaries for employees ($29.411 million).”

During Eid al-Fitr in May, Egypt closed the Saladin crossing with the Gaza Strip for four days while Israel closed the Erez crossing in the northern Gaza Strip for more than a week due to security concerns. The closure of the crossings deprived Gaza of 5 million shekels ($1.170 million) per day, much of it from the salaries of Gazan workers denied entry to Israel.

Moin Rajab, an economics professor at Al-Azhar University in Gaza, warned the financial crisis in Gaza will worsen, telling Al-Monitor he expects Hamas to struggle to pay the salary bill of its employees in the coming months. “The best solution would be for Hamas to persuade Qatar to increase its financial grant offered to employees every month in an attempt to inject reasonable liquidity in the Ministry of Finance's treasury.”

Ahmed Abu Qamar, an economist for the Hamas-affiliated Al-Resalah newspaper, decried the lack of an emergency budget for the Hamas government. “It is unreasonable to declare a financial crisis after only three months of global high prices due to Russia’s war on Ukraine,” he told Al-Monitor, adding that he expects the Ministry of Finance to continue to gradually lift subsidies on some commodities.