The economic agreement allows $10 million worth of food, fuel and supplies, as well as a boost for salaries. 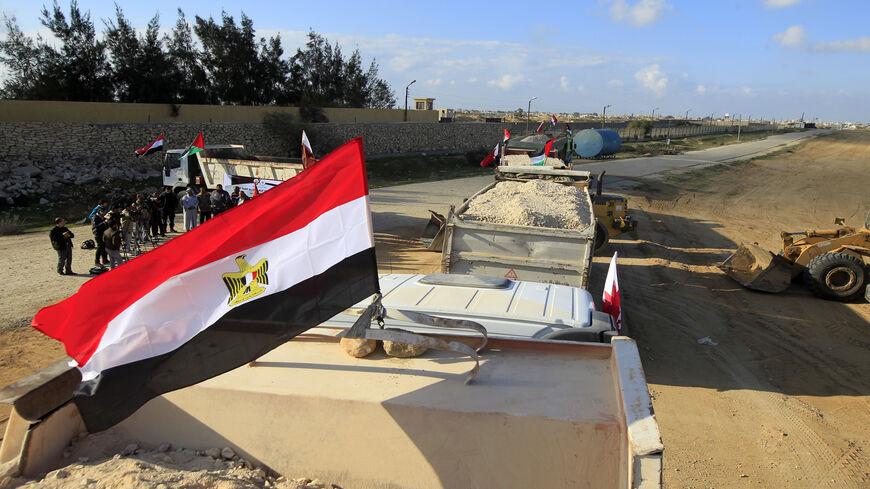 An Egyptian truck loaded with gravel enters through the Rafah border crossing, between Egypt and the Gaza Strip, as building material for the Qatari grant projects begin arriving, in the southern Gaza Strip, Dec. 29, 2012. - Said Khatib/AFP via Getty Images

GAZA CITY, Gaza Strip — Qatar and Egypt signed an economic agreement that allows Egypt to supply fuel and construction material to the Gaza Strip, through Qatari funding, under an agreement that would revive the Gaza Strip’s economy and contribute to paying the salaries of Hamas government employees.

Qatari Minister of Foreign Affairs Soltan bin Saad al-Muraikhi announced the agreement Nov. 18, on the sidelines of the two countries’ participation in the ministerial meeting of the Ad Hoc Liaison Committee for the Coordination of the International Assistance to Palestinians in Oslo.

The agreement reflects a consensus between Israel, Egypt, Qatar, Hamas and the United Nations to solve the stalemate of Israel's refusal to allow Qatar to transfer a monthly financial grant to contribute to paying Hamas government employees’ salaries, which had been suspended after the last battle between Israel and the Gaza factions in May.

Since 2018, Qatar had been offering a monthly grant of $30 million to the Gaza Strip, $10 million of which were paid as financial support for 100,000 underprivileged families at a rate of $100 per family; $10 million were used to buy fuel to operate the only power plant in the Gaza Strip; and another $10 million were directed to projects for the unemployed and contributions to the salaries of Hamas government employees.

The $10 million allocated to projects for the unemployed and contributions to Hamas employees’ salaries were suspended after the last battle between the factions and Israel. The new Israeli government refused to allow those sums into Gaza, as it opposes any direct funding for Hamas and its employees. Tensions resurfaced between both sides as a result.

Informed Hamas sources told Al-Monitor on condition of anonymity that the meetings between Qatari Ambassador Mohammed al-Emadi on his recent visit to the Gaza Strip Oct. 18 aimed at discussing a new mechanism to allow the entry of the grant allocated to Hamas employees in Gaza.

The sources noted that Emadi proposed the new mechanism to Israel and Hamas and explained that it would involve Qatar’s purchase of fuel and construction material from Egypt and their transfer to the Gaza Strip. Hamas would then sell them to consumers, and from their sale, it would contribute to increasing the salaries of employees who are currently getting paid half of their salaries.

The sources told Al-Monitor that Hamas has examined the agreement and made some amendments. It has also informed Emadi of its approval and indicated that the $10 million will be paid to the Egyptian Abnaa Sinai company, which provides supplies, merchandise and fuel to the Gaza Strip.

Al-Monitor touched base with several officials from the Hamas-led Ministry of Finance in Gaza to discuss the raise that employees will receive after the new mechanism is implemented, but they refused to comment.

The Israeli Maariv newspaper reported Nov. 19 that Israel expects Hamas employees to receive their salaries through the Qatari grant in the next few days, which will restore security in the Gaza Strip.

The head of the Public Employees Syndicate in Gaza, Kamal Moussa, told Al-Monitor that the expected disbursement rate, with the introduction of the Qatari grant for employees, will reach 60%, with a minimum of 1,600 Israeli shekels ($518) for each employee, i.e., a 5% increase in the rate of disbursement.

He explained that their recent meetings as a union with the Government Work Follow-up Committee and the Ministry of Finance aimed to increase the percentage of salary disbursement, and to provide sums of money from dues to employees who have special circumstances, specifically for those injured or sick, or as a contribution to paying university fees to the children of employees or those affected by the Israeli aggression on Gaza.

Moussa said that officials in the Government Work Follow-up Committee promised them that the disbursement rate would be increased, if funds were available and the Qatari grant funds were allowed entry. He noted that due to the blockade, financial hardship and the recent Israeli aggression, the Ministry of Finance was forced to borrow from banks to fulfill its obligations toward employees.

Since Hamas relinquished the premiership in 2014, its 48,000 employees have not received a full salary. The Ministry of Finance in Gaza has continued providing them with advances ranging between 40% and 55% of their salaries, which has negatively affected the economy and the economic conditions of many segments of Gazan society.

Moin Rajab, professor of economics at Al-Azhar University, said in an interview with Al-Monitor that the Egyptian-Qatari agreement will contribute, even if in a small way, to replenishing the economy in the Gaza Strip. He pointed out that any money entering Gaza would revive its collapsed economy.

He explained that Hamas’ financial situation has become difficult in recent months, due to the continuing Israeli blockade, declining revenues, impact of the coronavirus pandemic and Israel’s pursuit of Hamas’ means of money transfer to the Gaza Strip, apart from the military battles with Israel.

Rajab added that the party that is most at a disadvantage in the Qatari-Egyptian agreement is the Palestinian Authority, whose financial treasury will lose money that it collected as taxes on goods that were entering the Gaza Strip through Israel. These goods will now enter Gaza through Salah al-Din Gate, a small trade crossing with Egypt, controlled by Hamas.

The gate meets 17% of the economic needs of the Gaza Strip, which Hamas was able to operate within the framework of its understandings with Egypt since 2018, to benefit from the taxes that it will collect through the goods that will pass through that gate and to pay the salaries of its employees. Economic estimates indicate that the value of trade between Egypt and Gaza, through that gate, are approximately $55 million a month. The Gaza government earns $14 million in taxes per month.

In an interview with Al-Monitor, Ahmed Abu Qamar, economic specialist at Al-Resala newspaper, said that any money or goods entering the Gaza Strip would contribute to reviving the economy of the enclave, which right now is in need of any liquidity.

Abu Qamar considered that the financial conditions of employees in the Gaza Strip are very difficult, especially since they have not received any full salary for many years, not to mention the inability of the Hamas-run government in Gaza to disburse any sums of money to them from their accumulated financial dues.