Qatar has increased its aid package to the besieged enclave and getting involved in the file of the Palestinian prisoners detained in Saudi Arabia. 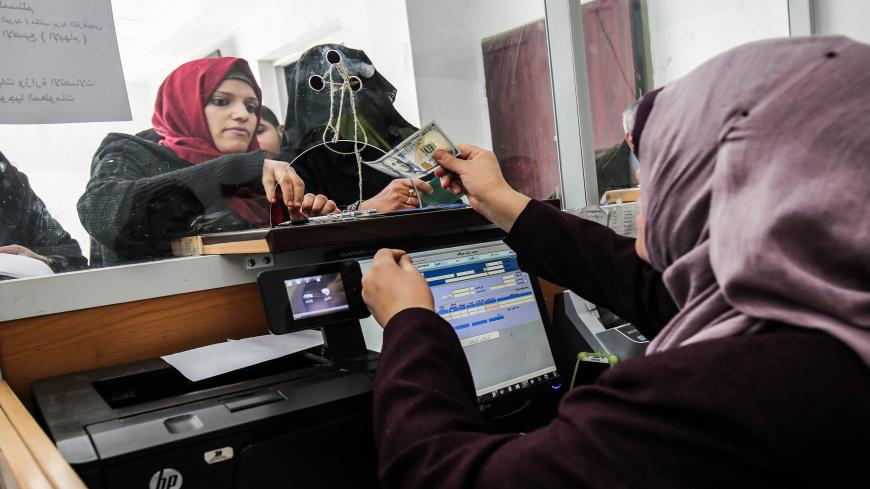 A Palestinian government employee receives a portion of her overdue salary at a post office in Rafah, in the southern Gaza Strip, Dec. 8, 2018. - Said Khatib/AFP via Getty Images

GAZA CITY, Gaza Strip — Qatar's Ambassador to the Palestinian territories Mohammed al-Emadi revealed in a press statement Feb. 14 that Qatar has agreed to increase its contribution to the salaries of the Hamas-appointed government employees in the Gaza Strip from $7 million to $10 million a month.

The contribution is part of the $360 million grant to the Gaza Strip announced by Qatar Jan. 31, only two weeks following a presidential decree to hold Palestinian legislative and presidential elections, as well as to vote for the Palestinian National Council.

Since its victory in the 2006 elections and its subsequent control of the Gaza Strip in 2007, the Hamas movement has been suffering an acute financial crisis under the Israeli siege. This has prevented the movement from paying its 50,000 employees full salaries. Instead, the employees only obtain an advance payment of 40% to 50% of their monthly salaries.

The employees’ salaries issue has been on top of the agenda of the inter-Palestinian talks between Fatah and Hamas, and the multiple negotiations rounds held in the wake of every military escalation between Israel and Hamas.

Qatar has helped defuse the Hamas-Israeli escalation through political efforts and financial aid.

The Hamas-appointed employees continued to receive half of their salaries for 14 years, prompting them to initiate a social media campaign in January claiming their financial dues. That has pushed Hamas and its allies, particularly Qatar, to take action to secure the money and pay the employees out of fear of losing their votes in the legislative elections scheduled for May.

On Feb. 14, the Hamas-run Finance Ministry in Gaza began paying each employee $130 as part of the dues amassed over the years — in addition to their monthly advance payment. The move has temporarily calmed the anger of the employees.

An official at Gaza’s Finance Ministry told Al-Monitor on condition of anonymity that the Gaza employees’ dues exceed $1.2 billion amassed over the years, and that the ministry is barely able to secure half of the employees’ monthly pays, in light of the financial and economic siege and declining state revenues due to the coronavirus crisis.

The source said there are ongoing talks with Qatar so as to help resolve the ministry’s financial crisis, more precisely the employees’ dues, and that the talks have so far resulted in Qatar providing a monthly sum of $10 million as a contribution to solve the problem.

He noted that Qatar’s contribution to the payment of the employees’ salaries will continue for a year, and expressed hope that the ongoing efforts result in the employees obtaining the money they are owed.

Khalil Hmedeh, former spokesman for the Gaza Public Employees Union, told Al-Monitor, “The official Palestinian institutions and the factions that recently held talks in Cairo should place the issue of the employees’ salaries at the top of the agenda.” He said that the union held talks with the Finance Ministry for an increase in the pay and disbursement of at least a part of the dues, but no results were achieved.

Qatar’s support for Hamas is not only limited to finances. Doha has met Hamas’ requests to mediate with Riyadh with the aim to release dozens of Palestinian detainees held in Saudi Arabia, including Mohammed al-Khodari, 81, a former representative of Hamas in Saudi Arabia, and his son, Hani al-Khodari.

Hamas’ request came after the Gulf reconciliation was announced in early January, which Hamas welcomed then.

Abdul Majid al-Khodari, the brother of Mohammed al-Khodari, pinned hopes on the efforts of Qatar and other parties — which he did not name — to secure the release of Palestinian detainees in Saudi Arabia.

He told Al-Monitor that the family has not received any updates yet, and pointed out that his sister-in-law contacts his brother in detention by phone and visits him once every two months. He quoted her as saying that her husband’s health has deteriorated.

By providing financial and political incentives to Hamas, Qatar seeks to push the movement to exert more efforts in order to end the Palestinian internal divide and run in the general elections. Emadi had said in a Feb. 13 statement, “We are in favor of the Palestinian national dialogue that would bring about unity and harmony, as well as holding free elections that would strengthen the Palestinian people’s choice of democracy.”

Talal Okal, political analyst and writer at the Palestinian Al-Ayyam newspaper, told Al-Monitor that Qatar’s financial and political support is designed to encourage Hamas to run in the various Palestinian elections and join the political process, instead of launching military operations against Israel.

He believes that the Qatari policy toward Hamas is designed to merge the movement into the Arab political system, and to pressure the movement to give up its ideological hostility toward Israel.