Hamas welcomes a Houthi initiative to release two Saudi airmen the Houthis captured in Yemen in exchange for Saudi Arabia freeing 60 Palestinian prisoners, including a Hamas leader and his son. 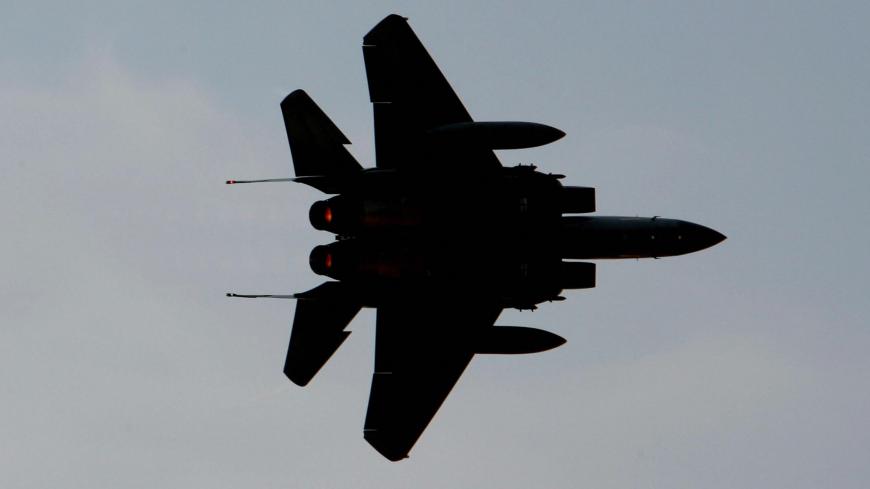 A Tornado warplane flies over the Saudi capital, Riyadh, during a graduation ceremony at King Faisal Air Force University in Riyadh, Jan. 20, 2008. Two Saudi airmen whose Tornado was shot down last year in Yemen are the subject of a prisoner exchange offer made by the Houthis involving Palestinian prisoners in Saudi Arabia. - HASSAN AMMAR/AFP via Getty Images

GAZA CITY, Gaza Strip — Yemen’s Houthi group has suggested that two Saudi airmen captured in February 2020 be released in exchange for the freeing of 60 Palestinians detained in Saudi Arabia, including Hamas members. The proposal follows a similar initiative the Houthis made in the spring.

The head of the Houthis' prisoner affairs committee, Abdul Qader al-Murtada, said in a televised speech Dec. 30 that his group was ready to release the airmen if Saudi Arabia frees the Palestinians.

Saudi Arabia has been detaining a number of Palestinians since early 2019, and brought a number of them before courts on charges of financing a terrorist entity. These Palestinians include Mohammed al-Khodari, 82, who was a Hamas representative between the mid-1990s and 2009 in Saudi Arabia, and his son Hani. Riyadh continues to refuse to respond to any attempts or initiatives regarding their release.

Murtada told Al-Monitor that his committee informed Saudi Arabia, via several parties and mediators, that the Houthis will only release the Saudi captives when Saudi Arabia frees the Palestinian detainees, who are living under harsh conditions in Saudi prisons.

Murtada said the Houthis captured the two Saudi airmen on Feb. 15, 2020, after shooting down their Tornado fighter jet with an air-to-ground missile in the northern province of al-Jawf, near the Saudi-Yemeni border. The two Saudis ejected from the jet just before it crashed and were captured.

Murtada said no reply has been heard from Saudi Arabia regarding the latest Houthi offer.

He described the offer to exchange prisoners as part of the Houthis' duty involving the Palestinians, in light of “the Saudi pursuit and sanctioning of Palestinians with the aim to normalize ties with Israel and liquidate the Palestinian cause.”

The new Houthi offer follows a March 26, 2020, initiative announced by Houthi leader Abdul Malek al-Houthi to release one of the airmen and five other Saudi troops in exchange for Riyadh freeing Hamas prisoners.

Bassem Naim, a member of Hamas' international relations bureau, told Al-Monitor, “We appreciate all efforts exerted by any party to help release the Palestinians detained in Saudi prisons.”

Naim did not reveal whether or not the Houthis communicated with them about the initiative or the number and names of the detainees that would be released. He said Hamas, along with other Palestinian parties, are continuously seeking the detainees’ release.

During an online meeting of the Hamas movement on Dec. 29, Ismail Haniyeh, the head of Hamas’ political bureau, appealed to Saudi King Salman bin Abdul-Aziz Al Saud for the release of the Palestinian detainees in Saudi Arabia. He said, “They [the detainees] have not tampered with Saudi security, and it is unacceptable to keep them in jail.”

In October, Khodari family members and their lawyers expressed concerns about the health of their relatives in Saudi prisons.

Abdel Majed al-Khodari, the brother of Mohammad al-Khodari, told Al-Monitor that his brother suffers from chronic diseases and his health is deteriorating in prison. Abdel Khodari said he fears the coronavirus will threaten his brother’s life.

Khodari said Saudi authorities moved his brother and nephew from Dhahban central prison to the prison in Aseer a few months ago, and have prevented them from making any phone calls except for short ones with the bother's wife, who is still in Saudi Arabia.

He revealed that a new trial session for his brother and nephew will be held Jan. 10, noting that all attempts to free them have failed so far. He added that he appreciates the Houthi offer on the release of Palestinian detainees.

Saudi Arabia has yet to comment on the Houthi offer. It seems the kingdom has decided to move ahead with the trial of Palestinian detainees before Saudi courts as it has been reluctant to respond to Hamas’ call for their release.

Sharhabeel al-Gharib, a political analyst close to Hamas, told Al-Monitor that through their initiative to exchange prisoners, Houthis want to show that they support the Palestinian people and their cause, unlike Saudi Arabia.

Gharib expects secret contacts to take place between Hamas and the Iran-backed Houthi group regarding the swap deal, pointing out that Hamas is a key pillar of the Iran-led axis in the region.

Tayseer Muhaisen, a professor of international relations at the Islamic University of Gaza, told Al-Monitor that the Palestinian dossier is of great importance to the various regional parties that are convinced that supporting this cause would generate sympathy from the people.

Muhaisen said Riyadh will most likely refuse the Houthi offer, because Saudi Arabia believes the Yemeni group is seeking to give the impression that it is more supportive to the Palestinian cause than Saudis. He expects more contacts between Hamas and the Houthis regarding the names and number of those who would be released in case Saudi Arabia consents to the Houthi offer in the future.