Qatar has announced that it will provide about $31 million to the Gaza Strip, enough to cover one month's salary for Gaza's civil servants, who hope the aid will bypass the banks to avoid deductions for outstanding debts. 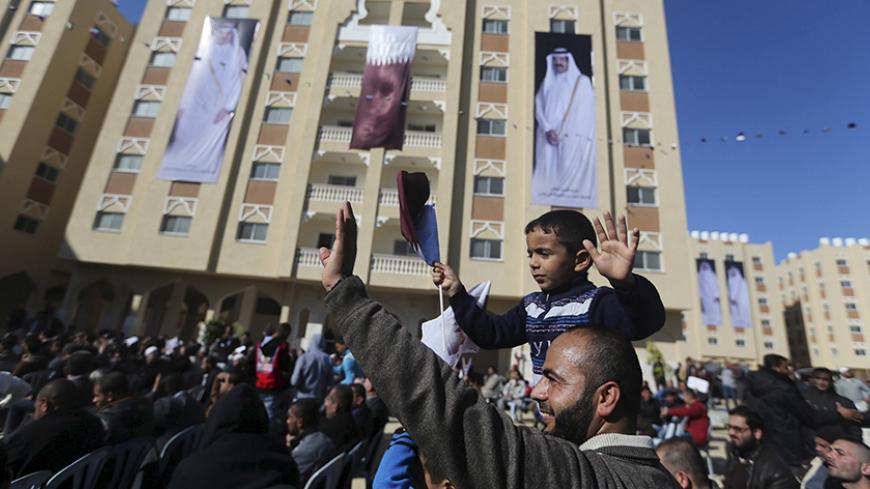 The employees of Gaza’s former government have been receiving a monthly advance payment that ranges from 1,200 to 4,500 shekels ($311-$1,168) since early 2014 following the financial crisis that Gaza’s former government faced. The Palestinian consensus government refused to recognize them as official staff, as they were employed following the Palestinian split and Hamas’ control of the Gaza Strip in 2007. The Ministry of Finance in Gaza ensures the advance payment from tax levies and some foreign financial aid.

Sources in the Qatari committee for the reconstruction of Gaza, formed following the 2012 war on Gaza to rebuild the city and its infrastructure, told Al-Monitor on condition of anonymity that the funds that Qatar’s emir sent to the Gazan workers indeed reached the Gaza Strip a few days ago and will be disbursed in early August. The funds will reach Gaza through the Qatari committee’s bank accounts, bypassing the Israeli financial siege that has blocked money transfers to Gaza since 2007.

The sources asserted that the Qatari ambassador to the Palestinian territories, Mohammad al-Amadi — who arrived in Gaza on July 28 to inspect the Qatari projects to build houses destroyed in the last war and to pave some major roads — will meet with Finance Ministry officials July 30 to decide on a mechanism to disburse the salaries. Many employees called on the ambassador and the Ministry of Finance in Gaza to leave banks out of the salary disbursal to avoid deductions for the workers’ outstanding debt payments.

The sources denied rumors that Qatar would pay the salaries of Gaza staff members for three consecutive months. They confirmed that the funds from Qatar to the Gaza Strip are enough to cover just one month and noted that the Palestinian Authority and Israel are well aware of Qatar's plan.

Undersecretary of Gaza’s Ministry of Finance Youssef al-Kayali told Al-Monitor the ministry is waiting to meet with the Qatari ambassador to the Gaza Strip and agree on the mechanism of disbursement. He noted that the mechanism and date of disbursement will be announced after the July 30 meeting.

Kayali confirmed that the amount that Qatar vowed to pay is enough to disburse the full salary of military officers and regular staff for the month, and expressed hope that Qatar would continue helping Gaza’s employees in the coming months.

The staff members asked that banks exempt the Qatari payments from any deductions. Kayali said that the disbursement mechanism that will be agreed upon with the Qatari ambassador will decide this issue.

Hamas welcomed the step, while Fatah objected to it. Jamal Muhaisen, a member of Fatah’s Central Committee, said in a July 23 press statement, “This money represents aid from Qatar to Hamas rather than to the Palestinian people.”

The Gaza Labor Syndicate also welcomed the move. Its spokesperson, Khalil Zayan, told Al-Monitor, “This step comes amid a disastrous economic and financial situation for the employees who have not received full and regular salaries since early 2014 due to the financial crisis, the Israeli blockade and the refusal of the consensus government to recognize them as civil servants.”

Zayan called on Qatar’s emir and people as well as the Arab and Muslim nations that support the Palestinian cause to interfere to stop the “criminal acts” by certain parties against the employees of the Gaza Strip that deprive them of their salaries.

The Israeli Walla news site reported July 25 that Israeli Defense Minister Avigdor Liberman approved the money transfer from Qatar to Gaza to pay the staff of Gaza’s former government their salaries, a change in his previous stances against money transfers. The website stated that the issue of salaries was one of the main reasons behind the outbreak of the 2014 war and Israel’s allowing Qatar to transfer money this time may keep another possible war at bay.

Ahmad Babili, who works in the field of security systems, told Al-Monitor, “I did not believe the news first because there have been many rumors about salaries in the country every month.”

He added, “When I heard Kayali in Gaza talking about the Qatari grant on television, I believed the news. We haven’t been paid a complete salary for two years, and we have been facing successive financial crises.”

Wasseem Jarwan, told Al-Monitor, “I ask the Finance Ministry in Gaza and Qatar’s ambassador to disburse our salaries through post offices in the Gaza Strip or through the Ministry of Interior rather than banks to avoid deduction of the loans that we took years ago against our salaries.”

He added that banks have not taken the people’s tough economic and financial conditions into consideration and that they deduct part of the advance payments the workers receive from the government to settle the loans.

The 50,000 employees Qatar promised to pay are rejoicing and hope that Qatar will continue this support.