The Hamas movement has begun disbursing $350 to Palestinian Authority employees who have not received their salaries from Ramallah since earlier in the year. 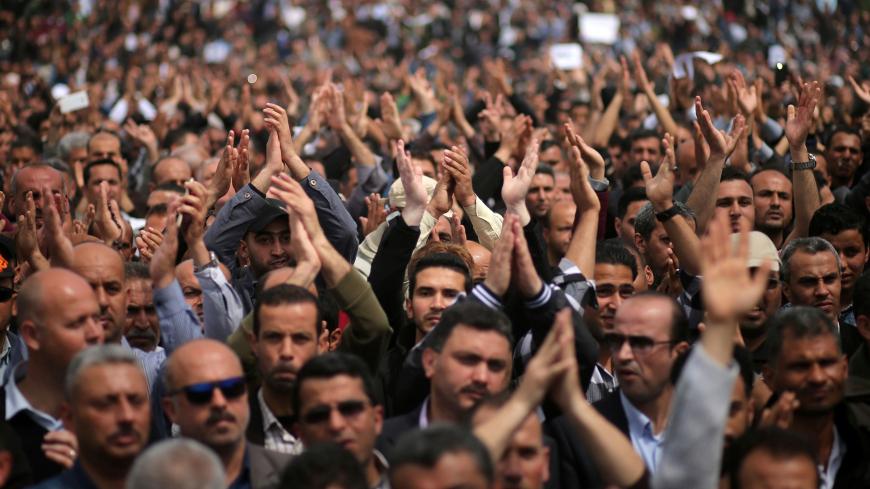 On April 4, the Finance Ministry in Gaza began disbursing 1,200 shekels ($350) to a number of Palestinian Authority (PA) employees who had not received salaries since January or February. Another group of employees were scheduled to receive a similar amount soon thereafter. Finance Ministry Undersecretary Yousef al-Kayali had announced the payments in a March 31 press release.

The Ramallah-based PA had stopped paying the salaries of 5,000 of its employees in Gaza in January and February, because they work for Hamas-run ministries or because they support Hamas, the Islamic Jihad Movement and dismissed Fatah leader Mohammed Dahlan. The PA has imposed sanctions on Gaza since April 2017 with the aim of pressuring Hamas into relinquishing control of the territory. The measures have included withholding funding for the Health and Education Ministries and reducing the salaries of the 60,000 PA employees in Gaza by 30%.

Kayali told Al-Monitor, “This step stems from a moral responsibility toward the employees and is aimed at strengthening their steadfastness.” It is the first time that the Hamas government has made payments to PA employees. In the past, PA employees were paid with money budgeted by Ramallah. Hamas-affiliated syndicates in Gaza welcomed news of the payments, claiming that it proves the legitimacy of the Gaza government, and like Kayali's statement, said it reflects a sense of responsibility toward the employees.

The PA’s decision to stop disbursing the salaries of government employees targeted Hamas' ability to provide humanitarian services and increased the movement’s financial and human burdens. It comes as Gaza faces difficult economic conditions that prevent Hamas from collecting taxes. Hamas' ability to collect taxes were negatively affected after the movement handed control of border crossings to the PA in accordance with a reconciliation agreement concluded between Fatah and Hamas in November 2017.

Samir Abdullah, former planning and labor minister in Ramallah, told Al-Monitor, “This was a misstep on the part of Hamas because it involves part of the movement’s differences with Fatah. Employees are paying the price for such differences, as the two movements seek to buy people’s allegiances. Employees should by no means be used as pawns. They should be paid based on professional, not political, standards. I expect the PA to respond by cutting off additional salaries and further increasing Hamas’ burden.”

Remarkably, Hamas’ decision comes at a time when the movement is struggling to pay the salaries of its own employees. The most recent payment to those it has employed was on March 14 and consisted of only 40% of the salaries owed them. They had previously not been paid since November 2018.

Hamas' ability to pay $350 to the PA employees suggests that it has either received funding from Iran or has managed to collect additional revenues in Gaza. It also probably means that its own employees will face further payment delays.

Mohammed Abu Jiyab, editor in chief of the Gaza newspaper Al-Eqtesadia, told Al-Monitor, “Hamas took this step because it is convinced that the PA would not be paying its employees their salaries. This left the movement with no other choice but to bear the financial cost of these employees’ work, worth 2 million shekels per month, the equivalent of about $560,000. This move also achieves political gains for Hamas in Gaza.”

The decision followed the outbreak of demonstrations on March 14-15 to protest price hikes and dire living conditions. Hamas’ security forces violently cracked down on the demonstrations, to disperse them soon after they began, and arrested hundreds of protesters. It appears that the protests prompted Hamas' leaders to make an out-of-the-box move to try to assuage Gazans facing potential disaster.

Hussam al-Dajani, professor of political science at Gaza's Al-Ummah University, told Al-Monitor, “Hamas' step aims at conveying a political message to the PA whereby the financial payments it makes are, unlike the PA’s, not based on political affiliations. There are Fatah employees who will benefit from Hamas’ payments. Hamas’ step is also a message to international donors whereby the Hamas government can be trusted with financial resources and donations. While this step causes embarrassment for [PA President Mahmoud] Abbas, the latter won’t hesitate to cut off additional salaries to strain Hamas' budget.”

Hamas is well aware that its decision to pay PA employees will increase its financial burden at a time when it is struggling to pay the employees it has hired, but it had a tough decision to make — incur the additional financial strain of disbursing salaries or face the possibility of PA employees quitting their jobs. It ultimately chose to try to motivate the workers through money while possibly gaining a certain amount of respect from Palestinians.