Just days after the new Palestinian reconciliation government was announced, a crisis has broken out because employees of the former Hamas government in Gaza have not received salaries, unlike their Palestinian Authority counterparts in the West Bank. 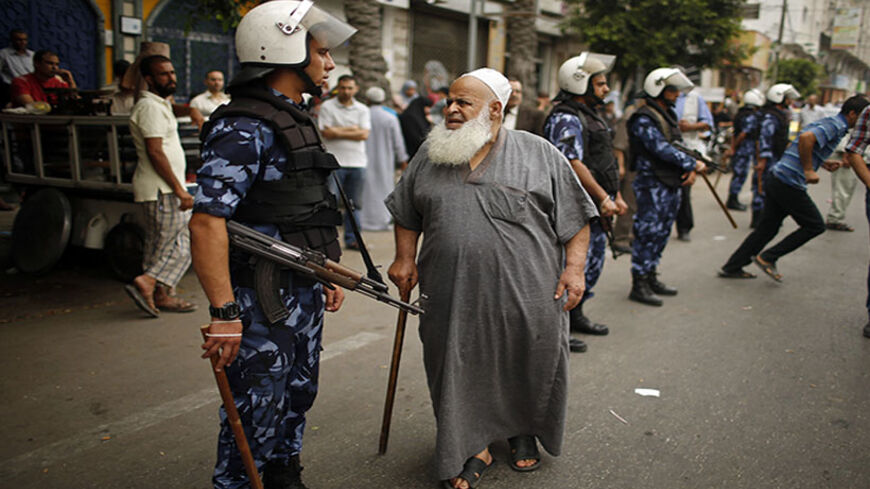 A Palestinian employee paid by the Palestinian Authority stands next to a policeman as he waits to receive his salary outside a closed bank in Gaza City, June 5, 2014. - REUTERS/Mohammed Salem

GAZA CITY, Gaza Strip — Barely a few days after the new Palestinian government was announced on June 2, the first of many anticipated crises erupted, following the nonpayment of salaries to employees of the former Hamas government in the Gaza Strip, in contrast to what happened with their Palestinian Authority (PA) counterparts.

The occurrence led to chaos in many Gazan cities on June 4-5, when fights erupted in front of banks, leading to police intervention. This was followed by banks announcing that, starting on June 5, they would remain closed until further notice.

Al-Monitor witnessed these Gaza events, and interviewed a protester who rejected what he called “the policy of discrimination between employees. We must be treated equally, and Gaza employees suffered enough as a result of not getting paid their full salaries for seven continuous months, due to the financial crisis that the former government went through, which led it to pay its employees only half their salaries.”

Another protester expressed to Al-Monitor his understanding of the irritation felt by his Gaza colleagues. “But that did not give them the right to take the law into their own hands, close down banks and prevent tens of thousands of employees from receiving their salaries. There are peaceful ways to express objection, protest and demands; none of which revolve around people forcefully imposing their will on another,” he said.

But the coordinated manner by which events unfolded in front of Gaza’s banks led Palestinians to increasingly believe that this was not spontaneous, but planned by Hamas to draw attention to its employees and not allow matters to progress smoothly. This was evidenced by Hamas leaders issuing statements justifying the protests and holding the reconciliation government responsible for what occurred.

But Hazem Abu Shanab, a member of Fatah’s Revolutionary Council, said that the events could be explained in one of two ways: “Hamas’ leadership either lost effective control of its members, or decided to object to previously agreed-upon matters, to placate its members who felt wronged by those agreements.”

On the other hand, Mohammed Sayam, the head of Gaza’s employee union, held the reconciliation government responsible for the salaries being late. In a press conference attended by Al-Monitor on June 5 in Gaza, Sayam said, “We will not accept this continued uncertainty regarding the salary payment date. Reconciliation shall not come at the expense of employees; otherwise, we will resort to a series of protest measures.”

The first of these measures may have been opening a Facebook page dedicated to their cause.

Furthermore, social networking sites were awash with intense arguments between supporters and opponents of the protests organized by Hamas employees. But the prevailing impression was that the incident was detrimental to Hamas’ popularity, and did it more harm than good, because its employees had previously endured much harsher conditions, and remained silent.

For his part, Mousa Abu Marzouk, the head of Hamas’ reconciliation delegation, asked the reconciliation government to not discriminate between its employees. Otherwise, according to him, it would be consecrating the divisions that exist between the West Bank and Gaza, by paying some employees their salaries and withholding them from others. He noted that the salary crisis reflected that Palestinians were still divided into two camps and warned of possible repercussions.

A spokesman for the reconciliation government, Ihab Bsiso, affirmed that the government would form a committee to review complaints about the salaries, and expressed regret about the Gaza incidents. “Crises cannot be solved in this manner, and doing so must occur through measures prescribed by law,” he said.

Signs of a solution to end the crisis began to appear when former Gaza Prime Minister Ismail Haniyeh called Hamas’ staunchest ally, Qatar, on the evening of June 6, and heard promises from Emir Tamim that Qatar would help the reconciliation government disburse Gaza employee salaries.

But undersecretary of finance in Gaza, Yousef al-Kayali, told Al-Monitor, “The breakthrough in the salaries crisis occurred when Qatar expressed willingness to cover the associated expenses. But no specific time frame for payments has been set yet. I hope that implementation would begin soon, once employee salaries are collated.”

This early crisis faced by the new government confirmed Al-Monitor’s contention that the devil was in the details when it came to implementing the reconciliation agreement between Fatah and Hamas.

The new development though is that, as soon as the crisis erupted, Hamas’ leadership felt that President Mahmoud Abbas was beginning to manipulate the situation. A prominent Hamas official told Al-Monitor, “We were wary about problems arising in the implementation of the reconciliation agreement. But this early start of difficulties raises a lot of doubts about the seriousness of Fatah’s intentions. The agreement was that the new government would be fully responsible for the employees, and mistaken are those who claim that the cause of the crisis was purely administrative. West Bank employee salaries could have been postponed for a few days until their Gazan counterparts’ affairs were settled. But the intent was to test Hamas — a test that it successfully passed, despite the fact that Qatar has not given guarantees about indefinitely paying the salaries, leading to the same vicious circle.”

But Zakaria al-Agha, Fatah’s man-in-charge in Gaza, affirmed that “the new government was not responsible for employee salaries prior to the announcement of its formation on June 2.”

In addition, the same prominent Hamas official said he was “not fully optimistic that the Qatari grant would permanently solve the Gaza employee issue. This is because we now have to contend with a problem concerning the 25,000 military employees, the salaries of whom, according to information from unknown sources, were being withheld by the PA because they are [Izz ad-Din al-] Qassam Brigades members. This is a new hurdle for the reconciliation effort to overcome, and I fear that Hamas may not be able to prevent large-scale protests from taking place in Gaza.”

These comments may have come in reply to a statement issued by Bassam Zakaria, the head of the employee union in the West Bank, who said that “the allocation of new salaries must occur through a budget proposal from the president. The Qatari solution to the Gaza employee problem came through Hamas and not the government, and we refuse to endorse the employment of all Hamas employees.”

An article published by Hamas stated that “the movement left in place an administrative and security apparatus, which it considers to be Gaza’s lifeline. Any attempt to manipulate it, bypass it or withhold its financial entitlements will result in grave consequences to all, because it would wreak havoc on the livelihoods of thousands of employees.”

Interestingly, the Qatari solution, which is yet to be implemented, coincided with statements by Abbas on the evening of June 7, in which he denounced the protests organized by Hamas and the closure of banks to prevent his employees from receiving their salaries in Gaza. He considered that “this did not portend well to Hamas’ intentions vis-a-vis the reconciliation.” He added that he “would not be able to pay Hamas employee salaries prior to agreeing on all the details associated with the reconciliation agreement,” while urging Hamas to continue to pay its employee salaries as it had been doing.

Al-Monitor met with a Hamas financial official who said, “The salary crisis concerns 50,000 employees, 10,000 of whom receive their salaries from the PA, while the remaining 40,000 get paid by Hamas a total of $25 million per month.” He expressed thanks for Qatar’s efforts in “containing the fire,” but said “this was not an ideal solution, for Qatar is not obliged to simply give out millions of dollars.”

He concluded, “The reconciliation government’s refusal to take responsibility for Gaza employees is an affront to their legitimacy, and comes as a result of them being considered to be affiliated with Hamas as a movement and not a government. But that is not the case, and Hamas will not be able to control them if they were denied their salaries. Undesirable scenarios, such as actions on the ground, might ensue to complicate the work of the government in Gaza, and escalate to become the first nail in the coffin of reconciliation.”