The pay dispute concerning Gaza’s public servants continues, with the consensus government refusing to pay for security and military employees hired by the previous Hamas government. 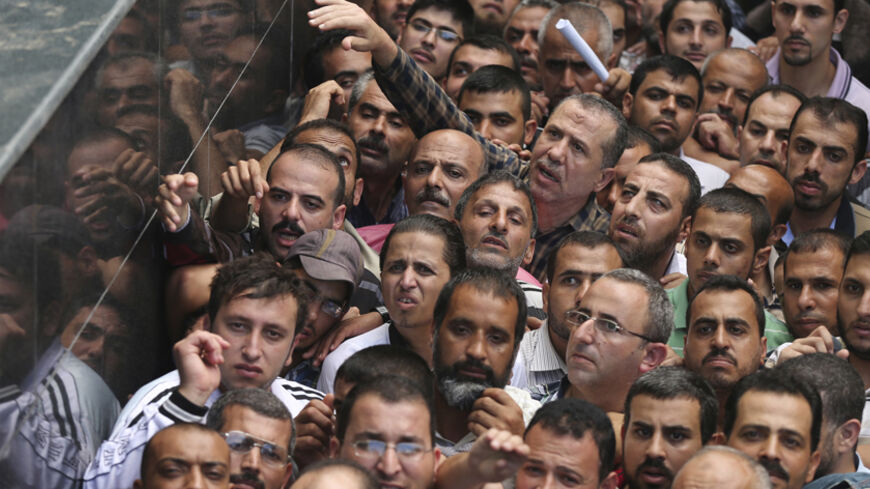 GAZA CITY, Gaza Strip — Traffic officer Mohammad Mokhtar observes with pity the queues of Palestinian Authority (PA) employees lining up at the beginning of each month in front of the Bank of Palestine in Gaza City to receive their monthly salaries. Meanwhile, his colleague Raed al-Halabi is busy controlling traffic to guarantee that the employees receive their salaries in an organized and safe manner.

Mokhtar and Halabi are policemen who were hired by the previous Hamas government in Gaza along with about 17,000 military employees who work in the Ministry of Interior and National Security in Gaza. They were hired after the PA employees stopped work in the wake of Hamas’ taking control over the Gaza Strip in June 2007. As a result, they were seen as "illegitimate" employees in the eyes of the PA.

“Although Hamas’ rule in Gaza has ended and the era of the consensus government has begun, this government still considers the military employees in Gaza as illegitimate. We have not received our salaries since its formation last June, although I remained in the same position,” Mokhtar told Al-Monitor.

He added that he “begged” for money from his relatives to provide for his family of six.

As a result of the crisis, the head of the public employees union in Gaza, Mohammed Sayam, said that the union has taken a series of measures aiming at disrupting some services in the ministries in Gaza, including a strike.

Moreover, the employees in Gaza went on strike on Nov. 18 and closed all governmental institutions and ministries.

Sayam asserted that his union will not accept for this discrimination to persist and that the measures will continue until all employees in Gaza are integrated, according to the financial and administrative hierarchy of the PA’s employees.

The consensus government paid $1,200 to each of the 24,000 civil servants in Gaza at the end of October, as part of their delayed salaries, while it singled out the military employees by not paying them.

This prompted Hamas to pay the employees a minimum installment of 1,000 Israeli shekels (about $260) on Oct. 9. This was the first time that these employees received money since the formation of the consensus government.

Youssef Rizqa, political adviser to former Gaza Prime Minister Ismail Haniyeh, told Al-Monitor, “The money that Hamas spent on the 17,000 military employees is part of the taxes that the authorities in Gaza are collecting, and that are not sent to the consensus government because of the latter’s insistence on not dealing with these authorities or meeting with them.”

Police officer Halabi noted that as soon as he had received Hamas’ payment he spent it on his large financial commitments and accumulated debts. He added that he only has a few shekels left, which he decided to save for his commute between work and home.

A leading source in the Ministry of Interior told Al-Monitor on condition of anonymity that the first step of escalation was the weekly two-day strike of the judicial police.

The source told Al-Monitor, “The judicial police started the partial two-day strike in order not to fully disrupt the work of the courts, as those cannot operate without security officers. However, the protest has evolved to include all security officers in the Ministry of Interior, and it was decided to restrict their work schedule to four days a week.”

“If the crisis persists, I am worried that other decisions might be taken and might negatively impact the lives of citizens,” the Ministry of Interior source said, adding that there was another movement to stage an open sit-in in front of the Palestinian parliament soon.

Rizqa believes that the consensus government has slackened in fulfilling its promises to integrate Gaza’s employees in the employment hierarchy of the PA. He also said that the persistence of the crisis “might annul the reconciliation agreement.”

However, Minister of Labor in the consensus government, Maamoun Abu Shahla, told Al-Monitor that his government “did not slacken in fulfilling its commitments but is working on settling the situation of civil and military employees in Gaza.”

“A committee that includes Qatar, the UN and the EU along with some international organizations is assessing and examining the civil servants’ files in Gaza,” Abu Shahla said. When asked why the military employees were not paid part of their salaries, like the civil employees, he answered, “These issues will be resolved very soon.”

Sayam, on the other hand, said, “I am sick of hearing these promises,” and demanded a time frame for the work of the committee that the consensus government formed to settle the situation of the civil servants.

Until then, police officers like Halabi will be scrounging to make ends meet. “When I reach into my pocket and discover that I’ve run out of shekels, I will stop going to work,” he said.