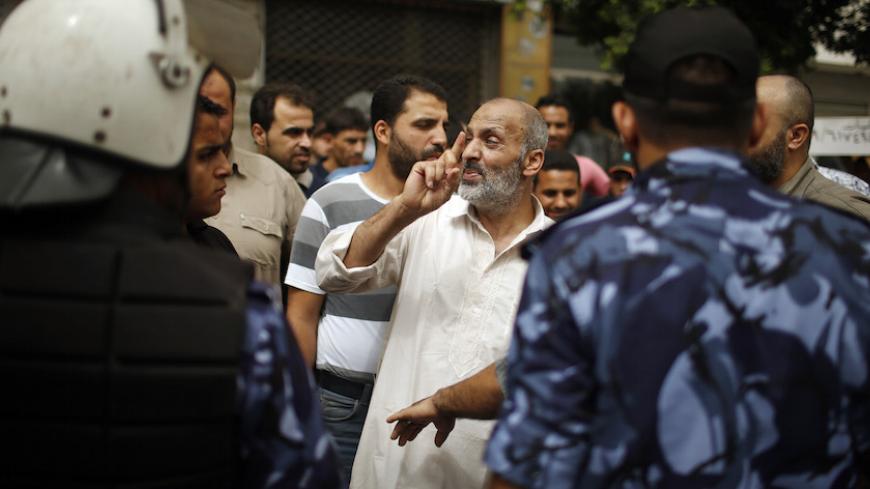 A Palestinian employee paid by the Palestinian Authority argues with employees appointed by Hamas, outside a closed bank in Gaza City, June 5, 2014. - REUTERS/Mohammed Salem

GAZA CITY, Gaza Strip — The Gaza government employee salary crisis is having a severe negative impact on the social relationships of those affected. The main victims are the employees who find themselves unable to meet their families’ food needs, as debts keep accumulating and creditors demand repayment.

Nearly 42,000 employees were hired by Hamas in the Gaza Strip between 2007 and 2014. They suffer challenging living conditions as the consensus government has been withholding their salaries since it took office in June 2014.

Social expert Dardah al-Chaer told Al-Monitor that most employees are now in debt because of the salary crisis and the continuing internal political division. They have been forced to adjust their social habits to avoid embarrassing situations with creditors.

“The employees are finding ways to escape creditors, in addition to being isolated and secluded, which have harmed the social behavior of the employees and their families. They prefer not to engage with others,” Chaer said.

Mohannad al-Sheikh, a government employee, prefers not to take part in family events such as wedding ceremonies and funerals, to avoid meeting his relatives who may ask he repay his debt to them.

Sheikh, who lives in Gaza City and provides for six people, told Al- Monitor: “Since the consensus government has taken office in Gaza we have made regular calls for our salaries to be paid, but it has yet to respond to our demands. This has forced us to borrow money to provide for our families and feed our hungry children, while our debts accumulate.”

He said the employees were hoping that the crisis would be resolved soon, so that they can pay their creditors. “As the crisis continues we are isolating ourselves from society, and stay in our homes so that we don't run into the people who demand that we pay our debts,” he added.

Haitham Bahtiti received several threats from the grocery store owner next to his house in the Sabra neighborhood in Gaza City. He threatened to go to the police and have Bahtiti arrested, as his debt has reached 6,000 Israeli shekels (about $1,500), which paid for food and supplies.

Bahtiti, who provides for nine people, told Al-Monitor: “I'm very embarrassed because of the store owner’s ongoing demands that I repay the money I owe him; but I can't pay him back. So on my way home I take a different route to avoid passing by the grocery store and feeling embarrassed.”

He said the political differences between Fatah and Hamas have exhausted the employees who are constantly pursued by creditors, and that the salary crisis has turned the lives of the employees into “hell.”

Murad Jabr, another government employee, at one point locked himself in his room to evade his wife and her requests for money to buy food and his children who asked him for a few shekels for sweets. He's also avoiding his landlord, as he is unable to pay rent.

“My marital problems have significantly increased to the point that my family’s security and stability is threatened, because we can't afford basic household items. We are not visiting any of my siblings’ families or relatives because we are unable to purchase [customary] gifts. This has isolated us from society,” Jabr told Al-Monitor.

Chaer said the debt of family providers and threats by creditors to contact the police have increased social and marital problems, which could result in an increase in the divorce rate in Gaza. The situation has also isolated heads of household.

Yusuf al-Kayali, the Ministry of Finance undersecretary in the Hamas government, spoke on March 27 about an installment payment for all government employees who were hired by Hamas in the Gaza Strip.

Kayali wrote in a brief statement that he posted on his Facebook page: “Despite the crippling financial crisis and the difficulty in securing liquidity, we will start to pay all employees an installment payment equivalent to 40% of February’s salary.”

For his part, a well-informed source in the former Hamas government, said Hamas “has recently paid [since October 2014] in small installments the employees’ monthly salaries in an attempt to reduce the social damage they and their families are suffering.”

The source, who spoke to Al-Monitor on condition of anonymity, added: “These funds are collected by Hamas from tax payments in Gaza. Because the consensus government has not assumed its responsibility in Gaza, Hamas has refused so far to forward these tax payments. The movement decided to instead pay them as part of the employees’ salaries.”

Gaza’s public employees union published a statement March 26 in which it agreed with the head of the consensus government, Prime Minister Rami Hamdallah, to form a committee to resolve the salary crisis of the government employees.

The head of the union, Mohammed Sayam, said in a statement: “A union delegation met with Hamdallah during his visit to Gaza on March 25 to discuss the problems of Gaza’s former government employees. … The meeting was positive and [we have] reached an agreement on the formation of a committee to address the employees’ issue.”

Jabr said the installment payments “do not change anything. They only have a limited impact on the crisis and do not resolve it. The [payments] are not even enough to meet the families’ basic needs.”

Jabr expressed hope that the government committee tasked with the resolution of this issue accomplishes its tasks fast, and completes the integration of the Hamas government employees, according to the administrative and financial hierarchy of the Palestinian Authority.