Why were 3,000 Gazans excluded from Qatari grant to pay salaries?

Hamas is accusing the Ramallah government of tampering with the list of Gazan government workers who were supposed to receive payment as part of a recent grant from Qatar. 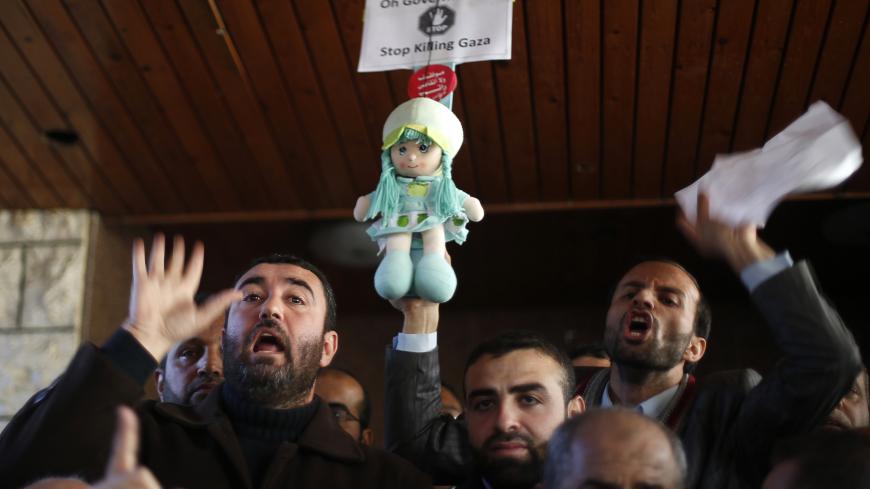 GAZA CITY, Gaza Strip — At post offices across the Gaza Strip Aug. 17, Gaza's government workers started collecting their salaries, funded by Qatar's grant to Gaza pledged in July. However, about 3,000 employees were surprised to receive nothing.

Ashraf Jadallah, who works in the Ministry of Youth and Sports in Gaza City, arrived at the post office on Aug. 17 to find his name missing from the list of beneficiaries.

“I get paid 1,300 shekels a month, about $330. However, I haven’t been paid fully for many months now. I had hoped to get paid in full to pay our house's rent and support my family of six children who are on the threshold of a new school year,” Jadallah, who lives north of Gaza City, told Al-Monitor.

Mohammed Abdul Hadi was counting on the money to pay off his debts that have been accumulating for more than two years, but was also shocked to learn that his name did not figure on the list of beneficiaries.

Abdul Hadi, who works in the Ministry of Social Affairs in Gaza and lives in the Nuseirat neighborhood of central Gaza, told Al-Monitor, “I was shocked when I logged into the government website to look for my name on the list of beneficiaries and I did not find it. Creditors have been contacting me since they heard the news about the dispersal of salaries. I was counting on the payment to pay off my debts.”

He noted that the Qatari grant, amounting to $31 million, was distributed among 20,700 civil government workers, in accordance with the same United Nations mechanism as when Qatar offered a previous grant for the Gaza staff back in June 2014.

“Per the UN policy, the funds are sent from Qatar to the West Bank through the Israeli crossings and then to Gaza via the Erez/Beit Hanoun crossing to be dispersed at the post offices. The UN informed us that Qatar had reservations about paying a number of employees for security reasons, without providing further explanations or disclosing the name of the party who rejected the specific names,” Kayali said.

He added, “However, we know that the names of the beneficiaries were sent to both Israel and the Palestinian Authority [PA]. Therefore, we are accusing both of denying many Gazan government employees their payment. While the PA did not see or receive the funds itself, it did receive the list of names of government employees, and PA security services checked those names."

On Aug. 18, Adnan al-Damiri, spokesman for the security services in the West Bank, denied accusations that the PA tampered with the list of Gazan staff names. He wrote on Facebook, “The Qatari grant funds were made in US dollars and Israeli shekels, put in suitcases and transported by car through the Erez crossing after the check was cashed in Israeli banks,” adding, “The PA and the Finance Ministry in Ramallah did not examine the check or count the money. They did not even receive any statements to this effect. Why would Hamas want to pit those who were deprived of their share against Fatah and the PA? The Hamas leadership is lying.”

Kayali stressed that 50% of those denied payment are civil servants in the health and education ministries, and most of them hold low-ranking positions and are not involved in any political activities.

When the Qatari grant was first announced, all military staff members affiliated with the previous Hamas government in Gaza, numbering 18,600, were explicitly excluded. With this group, the total number of civil servants deprived of payment totals about 21,600 employees.

Kayali also noted that Qatar stated it deprived some civil servants of payment in compliance with the UN policy of 2014, which laid out how the funds to Jordan would be transported to Gaza and distributed.

“Qatar said it is committed to the UN mechanism on dispatching funds to the Gaza Strip, according to which funds ought not to reach Hamas directly, while military staff also ought not to be paid, upon the request of the PA. The same policy is being employed this time,” Kayali said.

While civil servants might have a chance of receiving payment from grants by donors such as Qatar, the internal dispute in the Palestinian territories over the distribution of such funds is hurting their chances.