Although hospitals, medical centers and other sectors in the Gaza Strip are increasingly relying on solar power, its use is still limited to affluent households. 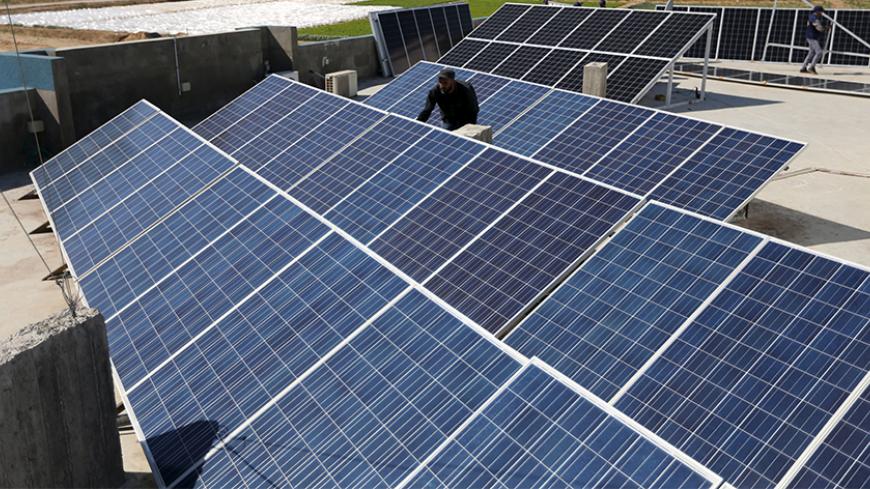 A Palestinian worker installs solar panels atop the roof of a medical center in Gaza City, March 1, 2016. - REUTERS/Ibraheem Abu Mustafa

GAZA CITY, Gaza Strip — Increasingly, solar energy is used as an alternative source of electricity generation in the Gaza Strip, which continues to suffer from the ongoing power crisis. While many hospitals, health care centers, schools and public outdoor spaces use solar energy, only households in affluent neighborhoods have access to this expensive alternative.

He said, “These sources combined, which provide 205 MW of electricity, do not meet the population’s power supply needs that equal a total of 450 MW. This implies an ongoing power deficit of 55%.”

To overcome the electric power crisis, 40 solar-powered lights were installed by the Palestinian Energy and National Resources Authority (PENRA) in a number of streets and at intersections in Gaza City on March 16. Three days earlier, the Kuwaiti Hospital in the city of Rafah, in the southern Gaza Strip, was supplied with 13 photovoltaic cells. This came as part of the most recent local project for power generation and the bridging of electric power.

Abdel Rahman al-Dahoudi, director of the Kuwaiti Hospital, told Al-Monitor, “This project came under very difficult circumstances, where power cuts in Rafah reached an average of 16 continuous hours, which has hampered the provision of medical services to the population.”

He explained that the new solar cells provided with electricity several key medical divisions such as the laboratory, operating room, labor and delivery and emergency rooms.

Turkmani said, “Access to solar power requires buying solar panels for $300, a rechargeable battery to store the power generated and a transformer for $600. This will allow a 300-watt-power generation that will provide light in the house and power the TV for eight hours. Yet running electrical equipment such as refrigerators and washing machines requires solar cells worth $7,000.”

He explained that Israel imposes obstacles to the import of solar cells and prevents their supply to Gaza without permission from the Israeli army, through authorized dealers. Turkmani said that this is the reason why they are extremely rare in the Gazan market at present.

In Rimal, one of the wealthiest neighborhoods in Gaza City, the many solar panels visible from the highest point, a tall tower, in the area indicate that this type of power generation is widespread. However, in the refugee camps and slumps hardly any solar panels can be seen.

Al-Monitor asked eight residents in al-Shati, also known as Beach camp, in western Gaza City, whether they are using solar panels to generate electricity. All of them said they weren't because of the high cost to purchase the panels.

Raed Maaswabi, a resident of the camp, told Al-Monitor, “The deteriorating living conditions and inability to meet the basic needs of households are behind the fact that the acquisition of solar panels is not a priority.”

He explained that the electricity crisis clearly shows the size of the gap between social classes in the Gaza Strip. While wealthy families have access to electricity around the clock, the poor use candles to light their homes.

In February 2015, the Palestinian Central Bureau of Statistics issued the latest figures according to which the poverty rate in Gaza stood at 65% during the fourth quarter of 2014.

According to Thabet, solar power in the Gaza Strip cannot be a substitute for the main sources of power supply, as Gaza's total area is 365 square kilometers (141 square miles), which means that there are not enough empty spaces for a large number of solar panels. He pointed out that the reliance on solar power in Gaza does not exceed 5% at present.

PENRA's director of information in Gaza, Ahmed Abu al-Amrein, told Al-Monitor that Gazans’ access to solar energy has remarkably increased over the past three years. He said that PENRA encourages citizens to rely on this source of energy to overcome power cuts, given that Gaza is a sun-rich area with an average of 300 days of sunshine per year.

Nevertheless, Abu al-Amrein said, “PENRA is making great efforts to expand the use of solar cells to public institutions, while it cannot provide it to citizens, due to its high cost. [This is why] it contents itself with providing them with free technical advice.”

He explained that PENRA implemented several projects to install solar panels on buildings housing public institutions, school campuses and roads. He said that most recently 40 solar-powered lights were installed in a number of main streets in Gaza, and that PENRA is currently setting up the first project of its kind for the generation of 30 MW of electricity by deploying solar cells on empty floor spaces.

Abu al-Amrein confirmed that the project was expected to be completed in December 2015, but the obstacles caused by Israel, most notably preventing the import of the necessary materials, have hindered its completion so far. He noted that all of these projects are funded by several international institutions such as the Japan International Cooperation Agency, the United Nation Development Program and the Islamic Development Bank.

Solar energy use continues to grow in public institutions, schools, hospitals and farms in order to overcome the electricity crisis in the Gaza Strip. This boom, however, has not found its way to the homes of poor families, who represent the vast majority of Gazans and continue to suffer due to the ongoing crisis.