How Gazans are dealing with internet crisis

The electricity crisis in the Gaza Strip is causing internet providers to cut off service, and Gazans fear a chronic internet crisis is coming. 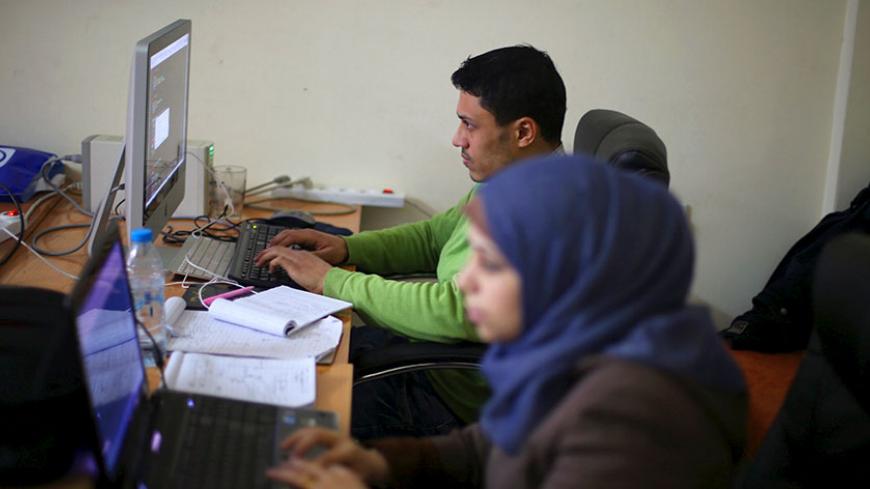 GAZA CITY, Gaza Strip — The internet has become the only outlet for Gazans to escape the concerns and problems resulting from the ongoing Israeli blockade imposed on the Gaza Strip since 2007.

However, Gaza has been barely getting any internet service due to increased power cuts that are leaving the citizens without electricity for 20 hours a day. On June 19, Israel reduced the electricity coming through the Israeli supply lines to Gaza from 120 megawatts (MW) to 48 MW, in response to a request from Mahmoud Abbas, the head of the Palestinian Authority.

Internet service is an important commodity for Gazans, as they cannot travel abroad due to the continued closure of the Rafah crossing.

Unemployed Gazan youth search for freelance work online in light of the growing unemployment rate, which reached 41.2% in the Gaza Strip, according to official statistics issued by the Palestinian Central Bureau of Statistics published in July 2016.

There are four main companies in Gaza that supply internet to a number of subcompanies, which in turn sell their services to citizens: the Palestinian Telecommunications Company, Digital Communication, Mada and Fusion. These companies acquire their internet supply through Israeli companies such as Bezeq.

In light of the electricity crisis, Gazans rely heavily on rechargeable batteries as a source of energy to keep internet service provider distribution centers and home internet routers operating.

Ziad al-Sheikh Dib, the director general of licensing in the Ministry of Communications and Information Technology in Gaza, told Al-Monitor, “The provision of internet services to citizens requires the installation of electricity-operated and battery-operated power plants that can run these circuits for seven consecutive hours in the event of a power outage. However, the problem of 20-hour power cuts prevents charging the batteries adequately, which affects the citizens’ ability to access the internet.”

This crisis has provoked widespread discontent and anger across social media. Activist Abdallah Abu Sharekh wrote on his Facebook page on June 23, “The reduction of internet hours in Gaza is a terrible violation of human rights and even a crime against humanity!” This sparked reactions and comments such as, “We can afford to cut everything but the internet,” from activist Mohammed Allam.

Mahmoud al-Rayyes expressed his discontent over the internet crisis, because his work in the foreign exchange market has been adversely affected by the internet being cut for about six hours a day from his residence in the Sheikh Radwan neighborhood of northern Gaza City.

“Following up on this market requires constant internet connection to monitor stocks that could fluctuate in seconds. But the internet cuts have lost me $1,700 in one week,” Rayyes told Al-Monitor.

Habib al-Shawa, a student in the faculty of commerce at the Islamic University of Gaza, told Al-Monitor, “Every minor crisis in Gaza surges until it deeply affects our lives. I am afraid that the internet cuts will turn into one of our chronic crises.”

Talal Okal, a political science professor at Al-Azhar University in Gaza, told Al-Monitor that the worsening internet crisis cannot be tolerated and may lead to the deterioration of the security situation between the Gaza Strip and Israel.

He said, “The internet crisis buildup is likely to increase the sense of isolation in Gaza as well as the unemployment rate. This leads to unrest that could ultimately turn into a military conflict between Gaza and Israel in order to force Israel to solve Gaza's problems, as an occupying state.”

Sheikh Dib pointed out that as the crisis continues to expand, the number of those affected remains unknown. Some citizens have no access whatsoever to the internet for hours, while others suffer from the poor quality and speed of the service. However, he said, the continuation of the electricity crisis will further exacerbate the internet crisis.

He noted that the Ministry of Communications and Information Technology is constantly following up with all internet companies in Gaza to solve this problem. He added, “The ministry provided some solutions to alleviate this crisis, such as installing solar cells to generate electricity for distribution centers or relying on external generators to charge batteries.”

But Sheikh Dib pointed out that it is not possible to resort to external generators at night because of the loud noise they produce.

Khalil Abu Salim, the director of the Palestinian Telecommunications Company in Gaza City, told Quds News on June 28 that the 20-hour power cuts prevent internet providers from distributing the service, noting that the batteries in each distribution center only operate for four to six hours per day, after which they need to be recharged.

Salim pointed out that his company tried to install solar cells to generate electricity for the distribution centers, but the lack of solar panels in the Gaza Strip prevents him from doing so for many of his company’s centers.

Despite Egypt's decision to bring Egyptian industrial diesel into the Gaza Strip on June 21 to operate the Gaza power plant, the situation remained as is due to Israel's reduction of electricity supply to Gaza, which means the internet crisis is heading toward further deterioration.