At a time when biased media outlets are a dime a dozen in Palestinian territories, a group of Palestinian journalists in the Gaza Strip decided to launch an independent online news channel that uses Facebook and YouTube to disseminate news items. 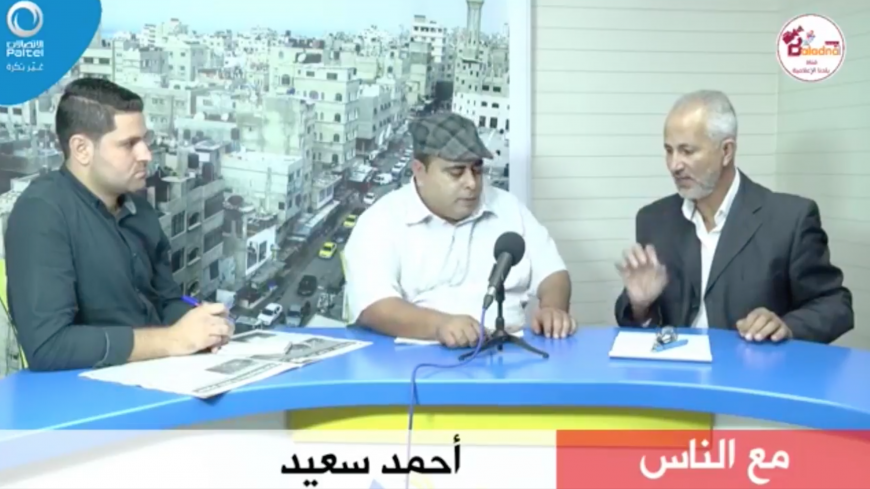 GAZA CITY, Gaza Strip — A group of Palestinian journalists in the Gaza Strip launched Oct. 1 the first Palestinian online news channel — Baladna (Our Country) — both on YouTube and Facebook.

Chief among the channel’s founding journalists and staff is journalist Ahmed Saeed, the chairman of the channel and anchor on the local Shaab radio station, and satirist Akram al-Sourani.

Saeed told Al-Monitor, “The idea behind the launch of Baladna is to create an independent media outlet at a time when Palestinian media outlets are controlled by political parties. This gives us larger leverage away from partisan influence or ideologies; it gives us the courage to expose all forms of corruption and tackle issues in a more objective and impartial manner.”

Saeed said they opted for an online platform based on the citizens’ increasing interest in social networking sites, at the expense of TV and radio, and because people carry around their laptops and cellphones.

Concepts Technologies, a Ramallah-based company that provides digital and social media services and solutions, issued a report in January in cooperation with Jawwal and the Palestine Telecommunications Company - Paltel, noting that 52% of Palestinians are connected to the internet and one in three uses social networks.

The report pointed out that social networking sites and websites are the main source for news and current events, followed by TV channels and radio stations, and that 58% of Palestinians believe that social media has a positive impact on Palestinian society.

Saeed said that the channel broadcasts its news bulletins live on YouTube and Facebook and that while the channel is still in the experimental phase, it broadcasts an hourly news bulletin and a number of political, social, sports and cultural programs, such as “Maa Al Nas” ("With the People"), which addresses the citizens’ problems and concerns; “Matha Law?” ("What If?"), which sheds light on the citizens’ views on various issues; and sports show “Sada Al Malaeb” ("Echo of the Stadiums").

Saeed noted that the channel currently employs 17 staff members and seeks to stand out by raising issues that are not usually tackled on TV. Such issues include countering the growing extremist religious ideology that is spread among the Gazan youth and identifying young talents.

Mohamed Nour, who hosts “Sada Al Malaeb,” told Al-Monitor, “The channel is a unique project that will be crowned with success. Society needs independent media outlets for two reasons: The first is to highlight sports, cultural and artistic events, which partisan media outlets believe are secondary as they focus on political issues. The other reason is to address controversial issues from an objective viewpoint without bias to one side at the expense of the other.”

He added, “We did not expect so many people to be interested in the channel. The Facebook page has already attracted more than 8,000 Facebook followers [more than 10,000 at the time of writing], while we only launched it recently."

He noted that social networking sites are no longer for people to just socialize but to freely express their opinions, bring about social change and expose the rampant corruption.

Momen Abdelwahed, the director of the public relations department of the government’s information office, told Al-Monitor that there are seven TV channels in Gaza, 24 local radio stations and 21 print media outlets (newspapers and magazines).

“The government’s information office — which represents the Ministry of Information — encourages independent media and supports all efforts aimed at developing independent media outlets as a means to deal with Palestinian issues from a credible and impartial point of view,” he said.

Ahmad Awad, a professor of media and political science at Al-Quds University in the West Bank city of Abu Dis, told Al-Monitor, “Most Palestinian media outlets are affiliated with political parties and only a few are independent, which makes the launch of any independent media a positive and important development.”

He explained that the internet and social networking sites have set the stage for digital media, which is characterized by greater freedom and independence, thus attracting more people than TV or radio.

“Independent media is healthy as it positively affects society and counters partisan media outlets seeking to reinforce specific ideologies. This makes us see the other viewpoint and listen to different views on issues we face,” Awad added.

However, he added, “Online broadcasting dispenses the channel from paying a broadcasting satellite service that can cost up to $100,000 a year.”

He explained that the channel was funded by the founding journalists and cost $15,000, a sum that covered the purchase of cameras, microphones and speakers, and the rent in the center of Gaza City. The current expenses of the channel do not exceed $ 3,000 per month.