Palestinian schoolchildren are using streetlights to do their homework as Gaza's electricity crisis continues. 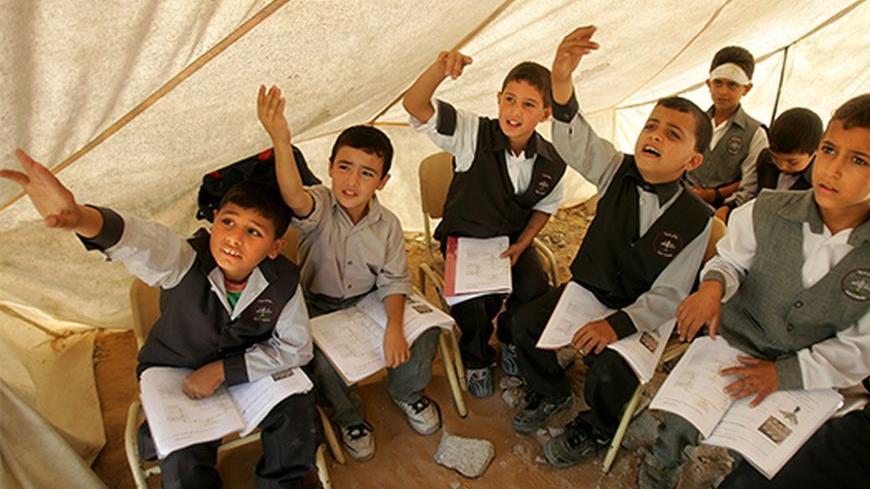 GAZA CITY — The only refuge Asaad Jabouri, 12, found for doing his homework is under a light post on Market Street in the al-Nuseirat Camp in central Gaza Strip. He came here fleeing the electricity cuts in his neighborhood, about 200 meters from the street.

Jabouri, a sixth-grade student, spread out his books on the sidewalk while vehicles rushed by. He was hurrying to finish his homework and avoid getting home late. After finishing his work, Jabouri took a deep breath and raised his head while still stretched out on the ground.

“I’m finished, now we can talk,” said Jabouri. He sat down on the side of the road to catch his breath. “I come here day after day to do my homework. Sometimes, I choose to sit under a light post, while other times I sit in front of a well-lit shop,” he explained.

Jabouri, who hails from a poor family, is taking afternoon classes at a government school. Classes begin at noon and end at 5 p.m., just as it starts to get dark. He doesn’t have much time to do his homework now that daylight-savings time is ending in the Palestinian Territories, thus shortening the days even further.

The electricity crisis in the Gaza Strip began on June 28, 2006, when Israeli military aircraft shelled a power station in the Gaza Strip in retaliation for the abduction of soldier Gilad Shalit by armed Palestinian factions. The station hasn’t been repaired since.

With the exacerbation of the crisis, local inhabitants have had to rely on alternatives, the most common being household power generators. They need fuel to operate — a resource that has become scarce due to the recent closing of underground tunnels between Gaza and Egypt. These tunnels used to provide Gaza with a regular supply of Egyptian fuel before they were destroyed by Egyptian authorities. Meanwhile, most inhabitants still rely on candles as a source of light, given the tough economic situation.

Jabouri’s father says that he doesn’t have the financial means to make up for the electricity cuts. He is a day laborer whose daily wages do not exceed 20 Israeli shekels (less than $6). Jabouri admits that his father can barely provide for their family of five.

Buying a candle would not cost a lot of money and would provide a source of light to help Jabouri do his homework. His father, however, is flatly refusing to buy any candles since a fire broke out at the Duheir home.

On Jan. 31, 2013, Gaza woke up at dawn to this tragic incident. This fire, which was started by a candle, ravaged the house of the Duheir family in the al-Shujaiyeh neighborhood east of Gaza City. It killed the entire family, including four children aged between two months and seven years.

Jabouri is not the only child suffering as a result of the ongoing power blackouts. His situation reflects one of the impacts of the electricity crisis and fuel shortages in the Gaza Strip, which have affected all aspects of life there.

The Ministry of Energy and Natural Resources in Gaza issued a warning last month via its website that it "risks completely shutting down due to an acute shortage in the amount of fuel needed to run the only power plant in the Gaza Strip."

The ministry also warned that “shutting the power plant entails a major humanitarian disaster in the Gaza Strip, which will affect all service and humanitarian aspects in light of the electricity deficit plaguing Gaza.”

Ahmed Abu al-Amrein, director of energy information in the Hamas-affiliated ministry, said that 10 Israeli power lines of 120 megawatts feed the Strip, as well as two 22-megawatt lines from Egypt. This is in addition to the power produced by the plant in Gaza, which amounts to 65 megawatts. The quantity of power from the plant depends on the availability of diesel to run the station.

“These sources combined do not meet our power-supply needs. The deficit is exacerbated when the power plant is not working at full capacity,” Abu al-Amrein told Al-Monitor, stressing that the deficit in electricity is up to 50%.

He confirmed that the power plant requires about 650,000 liters of industrial diesel per day to operate at full capacity, pointing out that only a third of this amount is available in the best-case scenario due to the closure of the border crossings and the shortage of the Israeli fuel supply.

“During winter and summer, the need for electricity rises to 320 megawatts, while in the spring and fall it decreases to 280,” said Abu al-Amrein. He stressed that the Qatari fuel that was supposed to be provided to Gaza has become an urgent need for the Palestinians, who suffer from the blockade and various restrictions.

However, Gaza has yet to benefit from this aid, which could significantly ease its crisis. The Egyptian authorities and the Israeli occupation forces have been making it hard to deliver fuel to the Strip.

A senior source in the Hamas government, who spoke on the condition of anonymity, confirmed to Al-Monitor that so far, there are no indications on the part of any party of a solution to the power crisis, or of a supply of industrial diesel to operate the power plant. He said that the crisis is currently being managed by relying on diesel stores, which are about to run dry.

Until the darkness is lifted, 12-year-old Jabouri will have continue to scavenge light to be able to do his homework, so that he won’t be punished the next day at school.