The worsening power crisis in the Gaza Strip has pushed people and traders to use ice blocks to preserve their food, which explains why demand for ice has risen 600%. 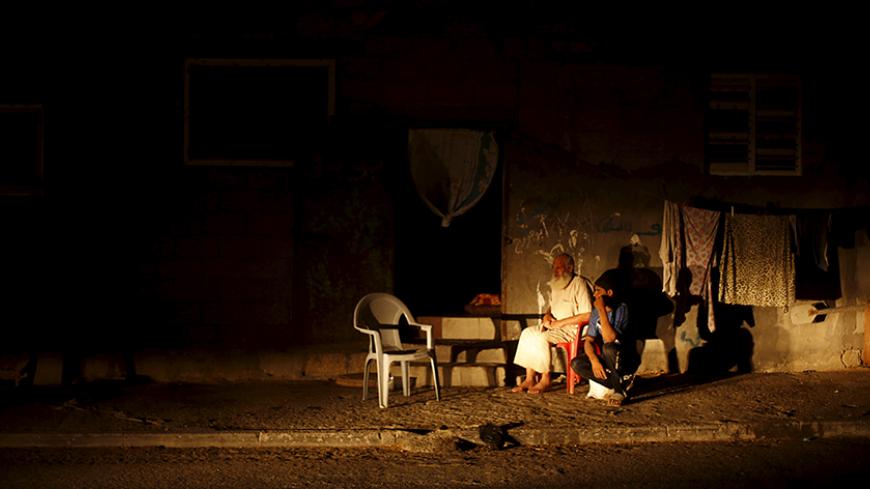 Palestinians sit outside their house as they flee the heat during power cuts at the al-Shati refugee camp in Gaza City, July 23, 2015. - REUTERS/Mohammed Salem

GAZA CITY, Gaza Strip — The worsening electricity crisis in the Gaza Strip has caused a boom in the ice manufacturing and selling industry. The industry is thriving due to the increasing public demand on it by citizens and meat and fish vendors who are keen to preserve their products.

The Gaza Strip has been suffering from an acute electricity crisis since Israeli warplanes bombed the only power plant in Gaza in 2006, following the kidnapping of Israeli soldier Gilad Shalit in June of the same year. As a result, electrical power is only provided for six hours daily, and eight at best.

Qassem, who supports a family of seven, said that the six hours of electricity a day are not enough to preserve food, stressing that power is not being supplied for six hours in a row, but at two-hour intervals.

“In light of the ongoing crisis, I had to resort to canned food until a friend of mine told me about the factories manufacturing and selling ice blocks. Eventually, I started to use ice to preserve the food,” he said.

Mohannad Bakr is a fisherman. He said that the ice factories are a panacea for fishermen to preserve fish, especially since fish are prone to damage if kept for long hours without refrigeration.

Bakr, who sells his fish in the Sheikh Radwan market in northern Gaza, told Al-Monitor, “Fishermen are buying large quantities of ice to preserve fish while in the markets in light of the scorching heat and the worsening electricity crisis.”

Mounir Abu Hasira, an owner of one of the ice factories in Gaza City, told Al-Monitor, “Ice manufacturing has existed for decades, and most of our customers were fishermen. However, the industry has [recently] greatly boomed in light of the worsening electricity crisis.”

He added that he established his factory six years ago, but that demand for ice increased last year by 600% at the very least, in an attempt to adapt to the power crisis in Gaza.

Abu Hasira said that he manufactures ice using a special machine that uses Freon, producing about 3 tons of ice per day. The price of 10 kilograms (22 pounds) of ice amounts to 7 shekels (about $2).

He added that he uses small power generators to ensure the ongoing operation of the machine during power cuts.

Ahmed Abu al-Amrin, the head of the Energy Information Administration at the Palestinian Energy and Natural Resources Authority, told Al-Monitor, “Gaza is supplied with power through 10 Israeli lines of 120 megawatts and another two lines of 22 megawatts from Egypt. This is in addition to the power plant in Gaza with a capacity of 65 megawatts.”

Amrin explained that these sources combined do not meet the electricity needs of Gazans, as the deficit in the electricity is up to 50%. He stressed that the power plant needs 650,000 liters of industrial diesel per day to operate at full capacity, and the plant cannot provide one-third of that amount at best, due to the closure of the crossings and the lack of Israeli fuel supplies.

This is not to mention the disruption of two out of the 10 Israeli power lines, as well as the complete breakdown of the Egyptian lines, totaling 52 megawatts of lost power, according to the report issued by the Gaza power plant Sept. 16.

“This lack of electric power resources coincided with a severe shortage of industrial diesel supplies necessary for the power station as a result of the closure of the crossings in Gaza at the hands of the Israeli authorities under the pretext of Jewish holidays. This has increased the deficit in electrical energy in Gaza by 70%, causing an unprecedented crisis,” the report said.

The worsening power crisis led to popular protests in various cities in the Gaza Strip, mainly in Rafah, as people protested for three nights in a row in mid-September because of the shrinking power hours in the city.

The energy alternatives to address the acute shortage of power supplies are not sufficient for the residents of Gaza, whose lives have become completely paralyzed, while the authorities cannot find solutions to the crisis.