As the power outage crisis in the Gaza Strip for more than 20 hours per day paralyzes all health care and economic sectors, Gazans await for Israel to allow fuel to enter the enclave to operate their only power plant. 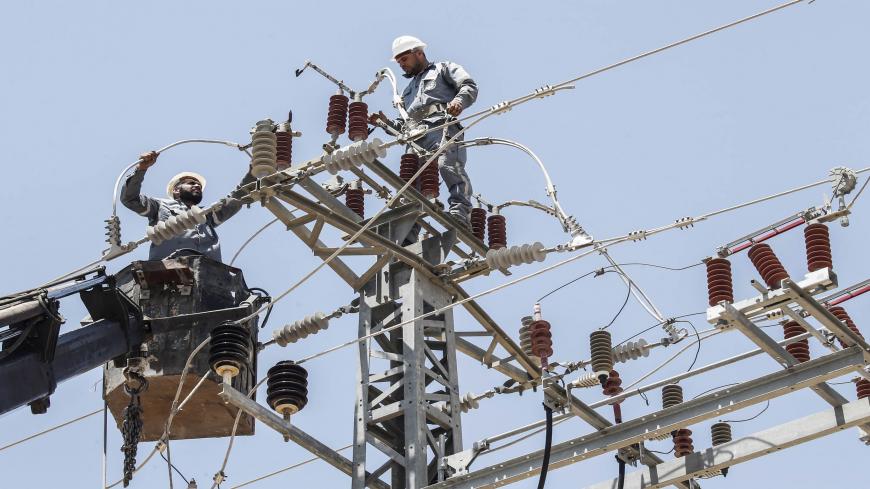 GAZA CITY, Gaza Strip — Khamis Murad, 61, needs regular dialysis treatment sessions at Shifa Hospital in western Gaza City of four continuous hours. But during his last session, the machine suddenly stopped after less than two hours, due to a power cut at the hospital.

In an Aug. 18 press statement, the spokesman for the Gaza Electricity Distribution Company (GEDCO) in the Gaza Strip, Mohammed Thabet, announced that electricity supply to homes and establishments in Gaza dropped to three to four hours a day, with more than 20 hours of blackouts. The previous distribution schedule was rationed around eight hours of supply versus eight hours of power outage.

Thabet explained that the new measure came after GEDCO was officially informed on the same day by the Gaza Power Generating Company that the generation process at Gaza’s sole power plan had been completely stopped, due to the exhaustion of fuel. On Aug. 11, Israel had suspended fuel shipments to the besieged enclave over the repeated launching of incendiary balloons from Gaza toward southern Israel.

Murad, who has suffered from kidney failure for four years, has to undergo a complete dialysis procedure three times a week at Shifa Hospital to stay alive.

“The blackout causes the dialysis sessions to be postponed or canceled, and this puts the lives of dozens of kidney patients at great risk,” Murad told Al-Monitor at the hospital. “Many patients are sleeping in the corridors of the hospital and even in its garden, awaiting for the power to return in order to undergo a dialysis session. The situation is very dire.”

Abdullah al-Qaishawi, head of the nephrology department at Shifa Hospital in Gaza, told Al-Monitor, “There are 820 patients suffering kidney failure in the Gaza Strip, most of them undergoing dialysis procedures at Shifa Hospital, the largest in the enclave.”

He said that the department is unable to provide medical services to these patients due to power cuts and the inability to operate power generators since Israel bans the entry of fuel into Gaza.

In an Aug. 18 statement, the Ministry of Health in Gaza warned of the serious repercussions of the inoperation of the power plant, and its impact on medical departments and treatments in its hospitals, such as neonatal units, intensive care, nephrology and dialysis, surgeries and cesarean deliveries.

The head of the Neonatal Network at the Gaza hospitals, Nabil al-Barqouni, told Al-Monitor, “The power outage crisis threatens the lives of 120 newborns who need neonatal care to survive. Hospitals in the enclave include seven neonatal care units, with 135 incubators. All of them run on electricity.”

Barqouni noted that the power cuts also affect other medical devices related to newborns, such as resuscitators and ventilators, which increases the risk to their lives.

He said that regular operation in neonatal units needs a consistent supply of electricity. “Providing alternative energy to incubators via solar energy is very expensive and we do not have the financial capacity to implement this. We cannot rely on power generators due to the lack of fuel,” he added.

In a statement posted on its Facebook page Aug. 18, the International Committee of the Red Cross in the occupied territories warned against the repercussions of the power plant’s inoperation, saying it will further worsen the burden afflicting the fragile health care system in the Gaza Strip. It added that the power crisis will hinder access to water and lead to major environmental problems.

Thabet told Al-Monitor, “The Gaza Strip needs 500 megawatts of electrical power daily. In the best circumstances, we provide only 180 megawatts, consisting of 60 megawatts from the power plant in Gaza, in addition to 120 megawatts from Israel.”

He explained that the Gaza Strip used to receive 18 megawatts of electricity from Egypt, but this stopped in March due to the security situation in the Sinai Peninsula.

The Palestinian Non-Governmental Organizations Network warned in a statement published on its website Aug. 19 of “the dangerous repercussions of the continued power outage on the health care, environmental, economic and humanitarian situation in the Gaza Strip.” It argued that the power outages and Israel’s ban on the entry of fuel into Gaza will seriously affect basic services, most notably the health care sector, environmental health services, drinking water supplies and sanitation services provided to the more than 2 million Gazans.

Two days earlier, the Federation of Gaza Strip Municipalities, which includes 25 municipalities, also sounded the alarm regarding the acute power outage. In an Aug. 17 statement, it warned that water delivery service to citizens’ homes will be affected, and the water distribution schedules will be significantly disturbed given that the wells depend mainly on electricity [to pump the water].”

The federation said that this crisis has disrupted sewage treatment plants, which will result in a health and environmental disaster.

The suspension of work at sewage treatment plants has led to the discharge of more than 110,000 cubic meters of untreated sewage water into the sea. This caused “almost complete pollution of the coast of the Gaza Strip,” an Aug. 19 statement by Gaza's Environmental Quality Authority said. This deprives citizens of the possibility to spend their summer holiday on the beach, the authority added.

Meanwhile, Undersecretary of the Ministry of National Economy Rushdi Wadi told Al-Monitor, “The suspension of operation at the power station in Gaza inflicts great losses on the industry and economy in Gaza.”

Electricity is the basic component of the production process in the economic sectors.

Wadi said that power cuts in factories will increase the production cost, reduce production capacity and increase equipment maintenance costs. “This will directly lead to an increase of commodity prices,” he added.

He concluded, “A protracted power outage crisis will affect the livelihood of citizens. When refrigerators aren't working food items such as meat, dairy and fish could be spoiled. This is a threat to the citizens' food security.”