Power outage adds to 'unbearable' hardships for Palestinians in Gaza

For a week, Gazans have been braving the scorching heat with only a few hours of electricity a day, following the closure of all border crossings with Israel and the suspension of the only power plant. 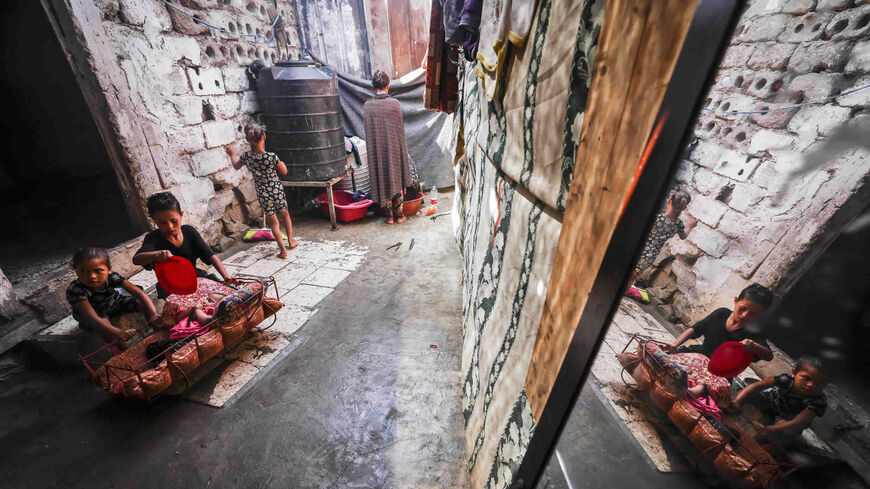 Palestinian children try to cool off a baby in a crib during a heat wave and lengthy power cuts in Nahr al-Bared camp in Khan Yunis, southern Gaza Strip, Aug. 3, 2022. - Mahmud Hams/AFP via Getty Images

The electricity crisis in the Gaza Strip that has been ongoing for years has exacerbated in the past week with power outages reaching up to 16 hours a day.

The worsening power crisis comes as a result of Israel’s decision Aug. 2 to close the border crossings with the Gaza Strip, blocking travelers in and out of the enclave and preventing aid from coming in, under the pretext of a potential retaliatory military operation on the part of Islamic Jihad in response to the arrest of Bassam al-Saadi, one of the movement’s prominent leaders in the West Bank.

On Aug. 5, Israel launched what it called a pre-emptive military operation against Islamic Jihad in Gaza in a bid to prevent any violent operations along its borders and ensure the safety of its citizens.

In a dilapidated house inside the narrow alleys of Khan Yunis in the southern Gaza Strip, Noha al-Astal lives with her husband and eight children.

“The temperatures are so high that we can’t even drink or eat comfortably. We are suffering from long hours of power cuts during the day. We are even using plastic trays and cardboard pieces to cool ourselves [by fanning] instead of electric fans,” Astal told Al-Monitor.

“Here in Gaza we live in a prison, or even worse a grave. The situation has been unbearable for a week, with no electricity and then the war broke out. There is no sense of safety or security,” she lamented.

Astal said, “And now we are running out of water, which means we can no longer shower, or do laundry or anything. We can’t afford to have a private generator subscription or get solar panels.”

She added, “All we want is to live in dignity and have the minimum life services such as electricity and water. When I learned that the power plant will stop working, I felt that life will stop too with the outbreak of the fifth war on Gaza. I hugged my children tightly and broke out in bitter tears.”

Astal’s situation is similar to all other Gazans who, since 2006, have been suffering from an acute electricity crisis. This was when Hamas kidnapped Israeli soldier Gilad Shalit, and Israel retaliated by striking the only power plant in the coastal enclave, plunging it into total blackout.

Today, the health situation in Gaza is at its worst with hospitals being forced to halt their services because of the electricity cuts and lack of fuel supplies into the enclave, according to an Aug. 6 press statement by Ashra al-Qidra, spokesperson for the Gaza Health Ministry.

Muhammad Thabet, director of public relations and media at the Gaza Electricity Distribution Corporation, the official body in charge of electricity supply in the Gaza Strip, told Al-Monitor, “Electricity is a basic service and the right of every citizen. Since Israel hit our only power plant in 2006, we have been seeking to solve the power crisis with the concerned stakeholders away from internal political strife.”

“We did not want the issue to be politicized so as to prevent Israel from using it as a pressure card on citizens. The lack of fuel supplies as a result of the latest border crossing closure caused us to lose some 60 megawatts [MW]. We are left with 120 MW daily, which is what we get through Israeli lines from inside the Green Line [Israel] toward Gaza,” he explained.

Thabet noted, “With the outbreak of the military operation on Gaza, we faced major fuel shortages caused by the disruption of supply from three Israeli main lines as a result of bombings.”

He added, “The remaining supply lines inside the Gaza Strip provide only 95 MW daily, which is not enough. This is why we decided to supply electricity for three to four hours a day only, which means 20 hours of power outage daily."

The weeklong power outages have had major negative repercussions on the health sector, including hospitals, as well as the water supply sector, disrupting the operation of wastewater pumps, potable wells, treatment plants, municipal services, bakeries and other sectors such as commerce, industry and economy, according to Thabet.

“During the past week, life has been completely paralyzed in Gaza, all because of the power cuts and lack of fuel supplies,” he said.

On Aug. 8, after signing a truce with Islamic Jihad a day earlier, Israel reopened the crossings allowing fuel-laden trucks to drive through the Kerem Shalom border crossing.

Thabet said, “The power outages also disrupted the work of municipalities and halted sewage treatment. Some municipalities had to pump wastewater into the sea, causing the Israeli Zikim beach to close down as a result of water pollution. We cleaned up our sea not so long ago, reopening it to the public up until the new round of aggression and the closure of border crossings.”

He noted, “Had the military operation continued for longer, the wastewater could have leaked to the drinking groundwater and would have led to an environmental health disaster."

“On Aug. 8, fuel trucks entered Gaza and we were able to secure 200 MW of electricity. We expect more electricity hours in the coming days, but our priority is to supply the hospitals and the medical care sector as a priority,” Thabet added.

Anwar al-Jundi, director general of the Water and Environment Department in Gaza municipality, told Al-Monitor, “The power outage has greatly affected the water sector and the environment. Water and sewage supplies need electricity in the first place, as there are about 83 water wells distributed across Gaza.”

He said, “These wells distribute 70,000 cubic meters per day, not to mention 10,000 cubic meters that come from the desalination plant in al-Sudaniah area, which are pumped into the city center. This operation needs electricity to pump the water back to the citizens. And amid power outages and the lack of fuel, we were only able to supply water for two hours a day, which caused inconvenience for citizens."

Jundi noted, “Water quantities are absolutely insufficient. We did not have sufficient capacity to operate the electricity generators given the lack of diesel as a result of the border crossings’ closure.”

He added, “We have eight main stations for pumping sewage water from the different areas in Gaza to the main treatment plants, which also necessitate nonstop electricity. During the past week, we used all the available diesel to run the pumps. We need 6,000 liters [1,585 gallons] of diesel per day to run the wells and treat solid waste. But we ran out of supplies, which caused the sewage water to seep into the sea, prompting the Israeli Zikim beach to close its shores due to the pollution in the sea.”

Jundi concluded, “I hope that life would return to normal because although the crossings were reopened and fuel supplies resumed, there are still fears of violating the truce if Israel does not implement the politically agreed terms."