As part of its offensive, Israel has bombed the Gaza Strip’s electrical infrastructure, resulting in power outages up to 21 hours a day. 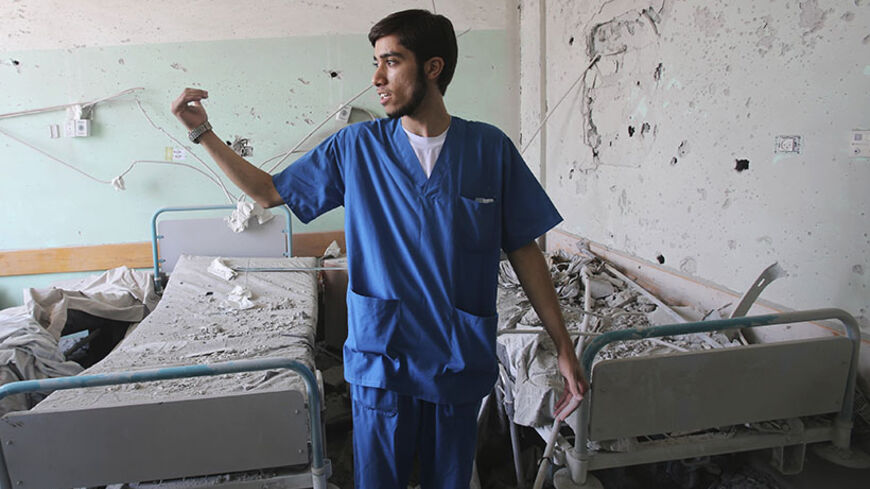 GAZA CITY, Gaza Strip — Gaza’s electricity cuts have increased to more than 21 hours a day since Israel destroyed most of the electrical transformers on July 17 — the day it announced the beginning of its ground offensive into the Gaza Strip. The power outages constitute an additional danger to locals, particularly in the health sector while hospitals work overtime to keep up with the high number of casualties from Israel’s continued bombardment.

Bassam al-Hamadin, the general manager of engineering and maintenance at the Ministry of Health in Gaza, said that the power outage in the Gaza Strip has been continuing for nearly five days. Government electricity supply has been cut off for a number of hospitals.

In an interview with Al-Monitor, Hamadin said that hospital staff had to work via electric generators all that time. “Three days ago, the electricity came back to some hospitals, but the problem remains at the Nasser medical compound and at the European hospital in the city of Khan Yunis. [Those two hospitals] are using generators all the time due to a lack of electricity and the destruction of the network adjacent to the two hospitals,” he said.

The power outage poses a great danger to medical services, especially since generators in hospitals cannot operate for extended periods. The generators also deplete fuel stocks at the hospitals.

Hamadin said that if the electric generators abruptly stop working, patients would be in grave danger. “In light of the continuous Israeli aggression on Gaza, the hospitals are packed with wounded and sick people — especially in the intensive care unit, where people are awaiting surgical procedures — babies in incubators and dialysis patients. So, in case of a sudden malfunction in the hospitals’ generators, [health] delivery will stop and the patients will be at risk of dying. And we would have a major health disaster,” Hamadin said.

The power outage also damaged Gaza’s municipal services, such as water and wastewater discharge. Montaser Shehata, the director of the Parks Department and the official responsible for services in the municipality of Gaza City, said that the power outage has harmed municipal services in Gaza, noting that the operating hours of most water pumps in Gaza, which run on electricity, have been greatly reduced.

In an interview with Al-Monitor, Shehata said, “Gaza citizens, who number more than 1.85 million, are constantly complaining about the lack of water because of power cuts of more than 21 hours a day. [Electricity powers water pumps that] bring water to their homes in residential buildings. Some citizens are getting water for only half an hour. [The water pumping] then stops because of the power outage.”

In addition, the electricity situation is affecting the sewage pumps that send waste to treatment basins, resulting in sewage being diverted to the sea or inside homes, causing serious environmental and health hazards.

Shehata said, “The problem has indirectly affected the solid waste sector because the amount of diesel fuel intended for garbage trucks goes instead to operate the water wells and the sewage pumps, thus causing an imbalance.” He said, “If the crisis continues, the Gaza Strip will face an environmental disaster.”

Jamal al-Dardasawi, the community relations director at the electricity distribution company in the Gaza Strip, said that Israeli shelling has struck power lines and many distribution networks. He pointed out that the situation started at the outset of the Israeli ground war. “The main Gaza power lines from the Israeli company have all been hit and stopped working, making Gaza lose a large amount of electricity,” he said.

In an interview with Al-Monitor, Dardasawi said, “In light of the regular crisis, the Gaza Strip gets from Israel about 120 megawatts of electricity, or 60% of Gaza’s total electricity. At the start of the Israeli war, we lost two power lines, followed by a third line in the areas of Khan Yunis and the central Gaza Strip about 10 days ago. They haven’t been repaired yet. With the start of the ground war about five days ago, the rest of the Israeli lines were affected. Nine out of the 10 lines that carry the Gaza Strip’s electricity no longer work.”

Dardasawi described the electricity situation in the Gaza Strip as “very harsh,” noting, “The occupation has targeted three lines that come out of the local Gaza plant. The remaining electricity is being produced by the domestic plant. It then goes to the consumption and distribution centers over the remaining lines, in weak form. Also, two lines connecting electricity from Egypt to Rafah in the southern Gaza Strip were targeted. Only 17% of the electricity that fed Gaza is left.”

He said, “[Distribution of the] remaining electricity in the Gaza Strip cannot be scheduled,” and announced the rationing schedule to the citizens. He said the electricity company needs prior approval from the Israeli army to repair the lines. He added, “The waiting time for the Israeli response depends on the army’s mood, and that may take weeks.”

Dardasawi said that in the current situation, Gaza’s hospitals cannot “rely on a special generator for 10 hours a day as this would need a large budget due to the high cost of diesel, which costs up to two dollars per liter [0.26 gallon].” He warned of a worsening humanitarian situation if the electricity shortage continues.