Gaza Hospitals Suffering Due To Border Closure with Egypt

Egypt's closure of the border tunnels is hampering the ability of Gaza's health sector to treat those in need. 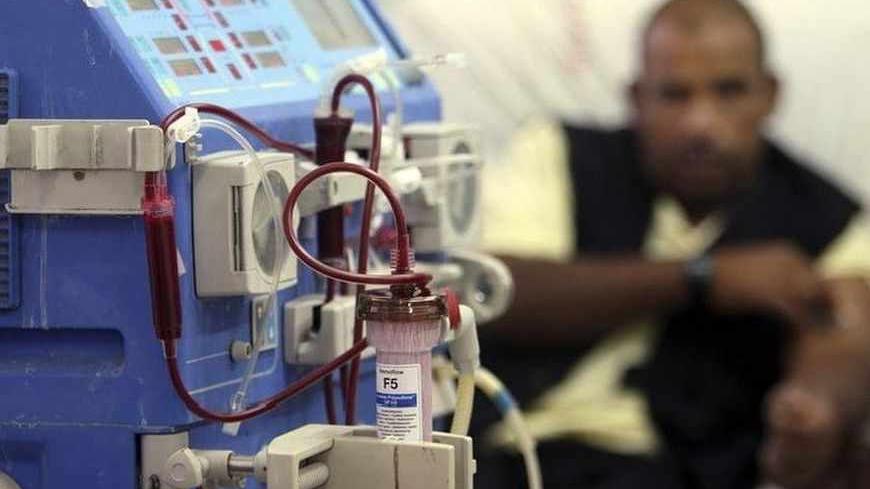 A Palestinian man awaits treatment by dialysis inside the kidney section at al-Shifa hospital in Gaza, Oct. 27, 2008. - REUTERS/Suhaib Salem

Baher al-Turk, a patient at al-Shifa Hospital in Gaza, has begun to suffer severe anxiety over his health. He fears the consequences of an ongoing shortage of the fuel necessary to run the power generators in the Shifa Medical Complex (the largest medical facility in the Gaza Strip), and whose power supply is suffering an acute crisis.

The fuel crisis in the Gaza Strip began after Egyptian security forces in the city of Rafah conducted a large-scale campaign against the tunnels used for smuggling gas into the Strip, destroying most of the pumps that bring fuel into the Strip.

In addition to fuel imported from Egypt, there is another source of fuel imports into Gaza, namely, Israeli fuel that enters the strip in small, unstable quantities. But these imports are few in quantity and high in price, rendering their use infrequent and highly limited.

Turk, 64, told Al-Monitor that he needs kidney dialysis three times a week at the Shifa Medical Complex, saying, "If the power is cut off, it will mean my life's end."

Turk spends four hours in every dialysis session, focusing his gaze on the device which drains his blood and returns it, while sneaking quick glances at his watch, hoping that it will perhaps move more quickly and his time in that place will come to an end.

He explained that the period of kidney dialysis following his surgery has been the hardest of his life. He added, "I appeal to all who can save Gaza from the fuel crisis to work to do so, since patients’ lives are in danger."

The Kidney Dialysis Department, which has become something of a second home to Turk over the last seven years, might be forced to close its doors to 251 regular patients out of a total of 450 individuals suffering from kidney failure in the Gaza Strip. That is, if the fuel shortage crisis continues, according to Dr. Abdallah al-Qishawy, the head of the Industrial Faculty at Shifa Hospital.

In an interview with Al-Monitor, Qishawy said, “The continued survival of patients suffering from renal failure is tightly linked with the continued operation of machinery that depends upon [the hospital’s] electric power generators which, in turn, require fuel in the event electricity is cut off.”

He added, “There are 35 beds in the Industrial Faculty; all of them are filled with patients around the clock. But power outages and generator fuel shortages mean that these patients may be subjected to ominous complications.”

The Intensive Care Unit at Shifa Hospital is considered one of the main departments affected by the fuel shortage. Its staff are constantly inundated with patients without interruption, due to the deepening crisis.

Dr. Kamal Abu Ibadah, deputy head of the ICU, confirmed that the severity of the fuel shortage has greatly affected his department, which is considered one of Shifa’s core pillars and most important centers. This, he said, is largely due to the need to keep certain drugs stored under cool temperatures, and connecting the department’s machinery to electricity.

In an interview with Al-Monitor, he said, “When power is cut off, the medical complex’s central power generator supplies the various departments with electricity. However, this generator will not work in the future if we do not handle the fuel crisis with care and confront the threat it poses with a profound sense of responsibility.” He called on the international community to intervene to rescue the medical sector in the occupied Gaza Strip from Israel.

Shifa Hospital is not suffering from this crisis alone. The director of Al-Nasr Children’s Hospital, Dr. Nabil al-Barqouni, also warned about the severe threat endangering the lives of 32 prematurely born children in the NICU, as well as six children in the intensive care unit.

In a press statement posted to the website of Gaza’s Ministry of Health, Barqouni stressed the ongoing crisis will halt medical care at the hospital and, consequently, will harm the lives of all the children who receive care there. He called upon international, humanitarian and children’s rights groups to intervene swiftly and immediately to bring in fuel to save these children's lives.

The Ministry of Health in Gaza also warned that there is an acute shortage in the quantities of fuel within power generators supplying local hospitals, medical departments, and associated health centers in the Gaza Strip.

Bassam Barhoum, the director of the ministry’s Department of Storehouses and Public Needs, issued a statement on July 2 stating that available supplies of fuel would not cover 20% of the ministry’s needs. He stated that “this shortage will entail serious ramifications for the work being done in hospitals, medical centers, blood banks and public health laboratories.”

For his part, Yahya Khader, the ministry’s director of the Ambulance and Emergency Unit, announced “a reduction in some ambulance services except in emergency conditions, due to the fuel shortage.” He noted that there are 70 ambulances, including 28 focused on providing intensive care.

Furthermore, the chairman of the Fuel Companies Association, Mahmoud al-Shawa, said that the Gaza Strip requires 400,000 liters [105,000 gallons] of fuel every day, while the central electric generator alone requires 500,000 liters per day to meet its own requirements.

In an exclusive statement to Al-Monitor, Shawa said the primary source for fuel in the Strip is "the underground tunnels linking Gaza and Egypt." According to him, "thousands of liters of Egyptian fuel are smuggled into Gaza daily."

He noted that the security measures taken by the Egyptian army in the border area where the tunnels are located, as well as the destruction of a number of tunnels used for smuggling fuel, has plunged Gaza into a major crisis which it has yet to emerge from. He pointed out that this has reflected negatively on all aspects of life in Gaza.

Shawa added, "We don't want to import fuel — which is an important necessity for Gaza — illegally. What we want is for the world to stand with us, to allow for fuel to be supplied legally, in a way that is consistent and not influenced by crises in neighboring countries."

Rasha Abou Jalal is a writer and freelance journalist from Gaza specializing in political news, humanitarian and social issues linked to current events.