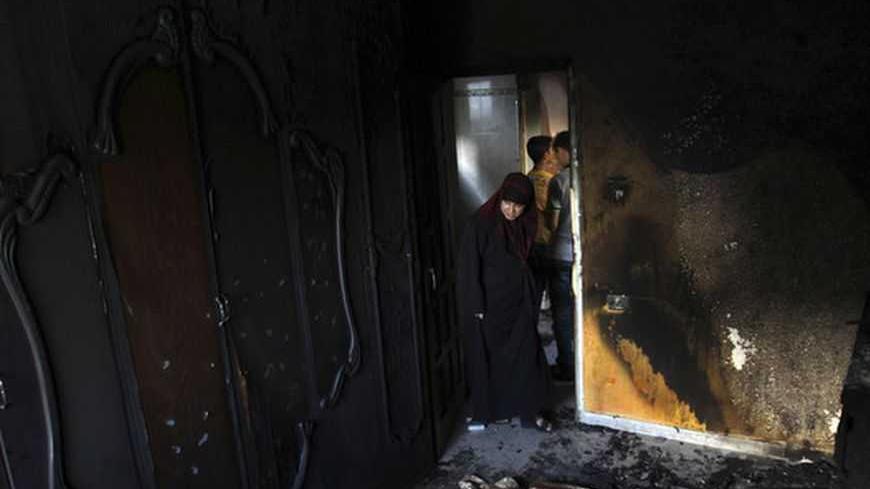 Last Thursday, Jan. 31, Gaza woke up to the frightful news of the death of an entire family of six, including four children, who perished in a house fire in the Al-Shujaiyeh neighborhood, east of Gaza City. According to investigations by the Gaza Ministry of Interior, the fire was caused by a lit candle, which was left unattended as the family members went to bed. Hazem Duheir, 32, his wife Samar, 30, and their four children aged between four months and six years all died in the house fire.

Due to severe oil shortages, locals in the Gaza Strip have been subjected to daily electricity cuts of up to 10 hours since the Israeli blockade was imposed on Gaza in 2006. Candles, kerosene stoves and power generators have become essential commodities in every house in the Gaza Strip.

Mahmoud Duheir, a relative of the victims who lives in a neighboring house, gave Al-Monitor the details of the dreadful incident. That night, he said, electricity was cut off throughout an entire block in the neighborhood, and after calling the electricity company in Gaza, they were told they would have to spend the night without electricity due to technical problems.

“Having lost hope of having the electricity back on,” Mahmoud said, “we slept in the dark that night. We woke up sometime near dawn to the confusing clamors and the sounds of our neighbors [...] I wish we had never woken. The entire house was burnt down. Civil Defense trucks and firefighters were trying to put out the fire. I was petrified and unable to comprehend what was going on. We didn’t know yet who died and who survived the fire, but when we went to the hospital, we were told that all the members of Hazem’s family had died. Everyone was crying. It was shocking.”

The results of the Ministry of Interior's preliminary investigation show that on Wednesday, Jan. 30, electric-company workers cut off power to Hazem Duheir's house due to mounting outstanding electricity fees. His relatives, however, managed to manually reconnect his house to an alternative electricity line.

This is not the first time that the electricity crisis in Gaza has resulted in such a tragic loss of innocent lives. According to Al Mezan Center for Human Rights, since February 2010, there have been 11 incidents of house fires due to electricity cuts, resulting in the deaths of 18 people.

In April 2012, three children from the Bashir family aged between four and seven years were killed in a house fire in Deir El-Balah after their mother lit a candle in the children’s room and left it unattended. In May 2012, two brothers, aged 18 and 28 years, from the Taha family in Rafah, south of Gaza, were burned to death after a fire erupted in the house while their father was trying to light an oil lamp.

Mahmoud Duheir sorrowfully stated that parties involved in the electricity crisis should be held accountable for the deaths. “We will sue the electric company and all the governments [in both Gaza and the West Bank] which profit from our suffering and our slow death,” he said.

“All parties involved here immediately blame the [Israeli] occupation and the blockade in order to escape their own responsibility for what happened. Then they would claim that parents should have been more careful, and therefore they are partly responsible. However, none of them addresses the actual cause. This is not only our problem; it represents the suffering of all the people in Gaza,” Duheir added.

In a similarly angry tone, Wael Matar, 25, from the Jabaliya refugee camp told Al-Monitor that although the government has consistently promised to solve the problem, open an investigation and hold the parties involved accountable, there have never been any results.

Matar blamed the population in Gaza for “keeping silent” about the grievous conditions they live in.

“The real problem is that this wave of anger is temporary and will soon expire. People will soon forget about these innocent kids until a similar misfortune happens. How can one blame the father for not having enough money to buy a generator or the mother for not being able to breastfeed her baby without candlelight?” Matar wondered.

Meanwhile, the public-relations director at Gaza’s electricity company, Jamal Ad-Dardasawi, told Al-Monitor that preliminary investigations absolve the company of blame for the deaths of the Duheir family.

“While we are able to make sense of the people’s attacks against the company since we understand their anger and resentment,” Ad-Dardasawi stated, “the people are unable to understand that this is something which is completely out of the company’s hands. There are external obstacles which we cannot overcome, such as the shortages in oil and equipment mainly caused by the Israeli occupation.”

Taher al-Nono, spokesman for the Hamas government, said in a statement that the government is responsible for the lives and safety of all the people in the Gaza Strip. “The government,” he added in a statement on his Facebook page, “does not shirk its responsibility for the tragic deaths, and we’re trying hard to find a solution to the ongoing electricity crisis.”

While the government’s preliminary investigation was meant to assuage people’s anger, it only further enraged locals as they saw it as an attempt by the government to discharge its responsibility for the deaths.

The Palestinian Raya Media Network reported that the Ministry of Interior’s investigation hurled accusations at almost every party except the government itself.

“The investigation is seen by the public as an attempt to burn the facts. It sometimes blames the victim, and at others it blames other political parties like the Islamic Jihad, while it also directly blames the Israeli occupation,” the network reported.

According to the investigation, members of the Islamic Jihad obstructed the inquiry, pointing their guns at the team members and preventing them from going inside the house to collect evidence, suggesting there were explosives hidden in the house. The report also mentions that fire trucks arrived at the scene only four minutes after they received their first call, contrary to claims by the victim’s brother that they arrived more than two hours later.

“So they blame us for our own death?” Mahmoud Duheir responded. “I have no idea what they based their investigation’s results on. Their claims about members of the Islamic Jihad obstructing the investigation process have absolutely no truth. What they’re trying to imply is that Hazem had explosives in his house which caused the fire, but everyone knows this is completely absurd.”

The electric company also distanced itself from responsibility for the tragic incident and the larger electricity crisis. In a statement it issued on Feb. 3, it pointed out that the party responsible for providing fuel and electricity is the Gaza Energy Authority, a governmental agency, and that their responsibility only starts when they have been provided with fuel.

But the people remain unconvinced, and hold the governments in Gaza and Ramallah also responsible for the conditions they live in.

“All we hope for is that all parties responsible for this work together in order to end the crisis. The two governments in Gaza and the West Bank are responsible for the deaths and for the people’s awful suffering. They sit in comfort at their offices and argue about their political disagreements, while we continue to pay with our own lives for their disagreements,” Matar said.

Mohammed Suliman is a Gaza-based writer and human rights worker. Mohammed has recently obtained a master’s degree in human rights from the London School of Economics. His writings appeared on different online publications including Al Jazeera English, openDemocracy, the Electronic Intifada and Mondoweiss.