A fire in a residential block in the densely populated Jabaliya refugee camp, in the northern Gaza Strip, killed 21 people as Civil Defense crews were unable to control the flames amid their modest capabilities. 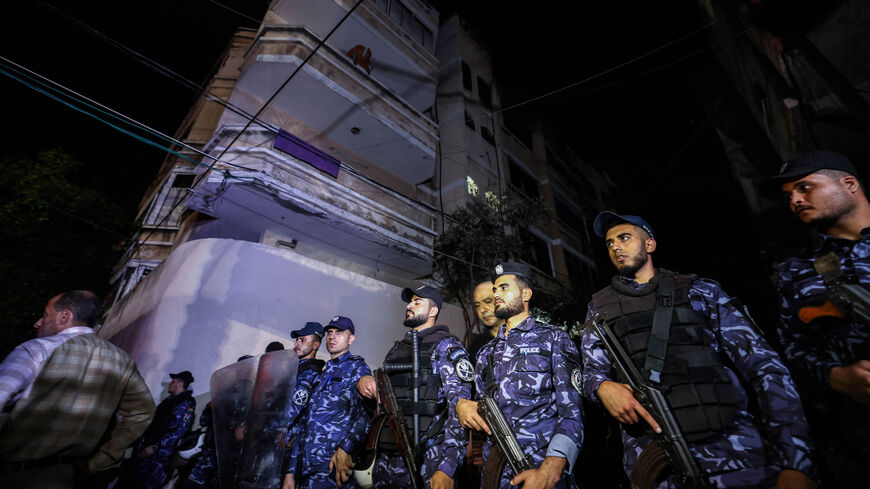 Police officers cordon off the area surrounding a building as firefighters extinguish a fire that broke out in one of the apartments in the Jabaliya camp for Palestinian refugees, northern Gaza strip, Nov. 17, 2022. - Mahmud Hams/AFP via Getty Images

GAZA CITY, Gaza Strip — Palestinians were shaken on the evening of Nov. 17 after a fire that erupted in a residential building that the Abu Raya family owns in Jabaliya refugee camp, in the northern Gaza Strip, killing 21 people including eight children.

The family was celebrating the return of one of its members from abroad on the top floor of the apartment building when the fire broke out, burning down the entire apartment and killing everyone inside, mostly women and children.

In a press conference held in Gaza City Nov. 17, spokesperson for the Interior Ministry Iyad al-Bozom announced the formation of a committee to investigate the cause of the fire. “Preliminary investigation showed that a large amount of gasoline stored inside the apartment contributed to the massive fire and to the high number of deaths,” he told reporters.

Gaza Strip residents tend to store gasoline in their apartments to operate their private generators in light of the continuing power cuts, reaching up to 16 hours a day. The power crisis in the besieged enclave has been ongoing since Israel bombed Gaza’s only power plant on June 28, 2006.

Preliminary estimates indicate that the family members were completely locked in during the fire, with no way to escape from the flames that consumed the apartment from all sides.

He added, “All the windows of the apartment had iron bars to protect children from falling, so the victims could not escape their inevitable fate.”

The Civil Defense was unable to control the huge fire, which exceeded its modest capabilities that have been regressing by the yearslong Israeli blockade imposed since 2007.

Zuhair Shaheen, director general of the Civil Defense in Gaza, told Al-Monitor, “The equipment available at the Civil Defense has been in use for more than 20 years, and its capacity is eroding year after year and needs to be renewed [so we can] deal with major events.”

He appealed to the international community to put pressure on Israel to allow the development of the Palestinian Civil Defense, its equipment and mechanisms.

A national day of mourning was declared throughout Palestine, and flags were hanging at half-mast at official Palestinian institutions in both the West Bank and Gaza Strip. President Mahmoud Abbas described the fire as a “national catastrophe.” On Nov. 18, tens of thousands of Palestinians took part in the funeral of the victims, which was also attended by representatives of all Palestinian factions.

The Jabaliya camp is located to the north of Gaza City over an area of only 1.4 square kilometers (346 acres). It is considered one of the most densely populated Palestinian refugee camps. Today, 113,990 Palestinian refugees are estimated to live in this area where houses are built close to each other, according to the United Nations Relief and Works Agency for Palestine Refugees (UNRWA).

According to UNRWA, there are 19 school buildings, one food distribution center, three health centers, two relief and social services centers and one public library in the camp, which has been suffering from major problems, including power cuts, high employment rates, water pollution and overpopulation.