PA wants to break free from reliance on Israeli fuel

Following the rupture of US-Palestinian ties and Israeli violations to the Paris Protocol, the PA is moving forward with its plan to break free from reliance on Israeli fuel, particularly since the financial crisis requires purchasing fuel at cheaper prices. 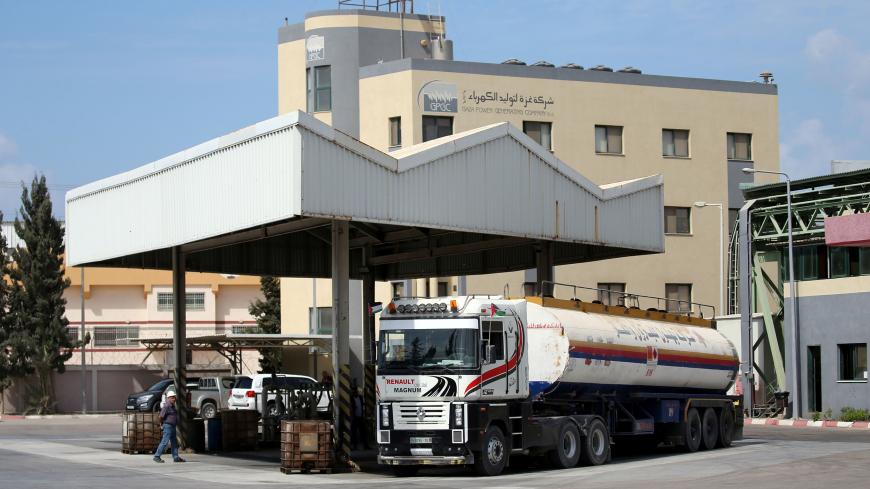 A fuel tanker is seen at the Gaza power plant, in the central Gaza Strip, Oct. 9, 2018. - REUTERS/Ibraheem Abu Mustafa

GAZA CITY, Gaza Strip — The Palestinian Authority (PA) continues moving forward toward an economic disengagement from Israel, particularly since the Palestinians have accused Israel of violating the 1994 Paris Protocol on Economic Relations. On Feb. 17, Israel deducted around 502 million shekels ($139 million) of Palestinian customs revenues, claiming that this is equivalent to the amount paid by the PLO in stipends for Palestinian prisoners in Israeli jails and the families of Palestinian victims killed or wounded in confrontations with Israel in 2018. This has dragged the Palestinian government into a crippling financial crisis.

On June 6, Minister of National Economy Khaled al-Osaily spoke of the Palestinian efforts to replace Israeli oil with Russian or Arab oil, on the sidelines of the St. Petersburg International Economic Forum in Russia.

“We hope we manage to import any crude oil particularly from Russia or any Arab country in order for us to be less reliant on Israeli oil. We have various options. … I believe that the Russian oil is a possible option that we hope we could import,” Osaily told Russia’s Sputnik.

He said that Palestinian President Mahmoud Abbas and his government are concerned with the import of Russian oil, adding, “It is however too early to speak of the quantities.”

The PA has increased its political and economic cooperation with Russia in the past few years, following the rupture of the Palestinian-US ties since US President Donald Trump’s Jerusalem decision on Dec. 6, 2017, the relocation of the US Embassy to Tel Aviv on May 14, 2018, and the United States halting aid to the Palestinians and closing the PLO office in Washington on Dec. 10, 2018.

In April 2015, the two sides established the Russian-Palestinian Intergovernmental Commission on Trade and Economic Cooperation. Since then, the commission held three meetings: on March 15, 2016, April 8, 2017, and Nov. 7, 2018. In 2016-2018, they also signed 19 joint cooperation agreements in the various economic fields.

The present development was preceded by efforts to import oil from countries such as Iraq, which Abbas visited in March. The relevant Palestinian-Iraqi commissions discussed the possibility of supplying the Palestinian territories with fuel from Iraq to the Palestinian city of Jericho via Jordan.

Azmi Abdul Rahman, spokesman for the Palestinian National Economy Ministry, told Al-Monitor that the economic disengagement from Israel is conform to the Palestinian government’s strategic plan that includes gradually relinquishing Israeli oil and importing it from Russia or Arab countries instead.

He explained that Israeli fuel is too expensive for Palestinian consumers compared to the fuel derivatives imported from many Arab countries, and stressed that the 2014 Paris Protocol does not prohibit Palestinians from importing oil from any other country in the world. Yet it imposes conditions on the import of non-Israeli oil, he added.

Speaking to Al-Monitor on condition of anonymity, a source at the Palestinian General Directorate of Petroleum in the West Bank said that nearly 80 million liters of fuel is consumed each month in both the West Bank and Gaza Strip, which amounts to up to 5 billion shekels ($ 1.38 billion) a year.

He added that the government needs to complete reviewing the plans it is currently examining before considering the import of fuel from a country other than Israel. Such plans focus on counting the total cost, including the cost of importing the fuel from the country of origin, the transportation and refining mechanism, and the sale to the consumers.

The Gaza Strip was the first to partially replace Israeli fuel with Egyptian fuel, due to the inability of the Hamas-run Finance Ministry to pay the high price. In June 2017, it started importing fuel from Egypt to meet a third of its needs.

As a punitive tool against Gaza residents, Israel prevented the entry of fuel into the Gaza Strip for several days in May, following the military confrontation with the Palestinian factions. This has generated a fuel crisis in Gaza where 450,000 liters of diesel fuel is needed daily for the power plant to operate. In 2015, the gasoline consumption was 30-35 million liters per month, according to the General Directorate of Petroleum.

Mahmoud al-Shawa, chairman of Gaza's Petroleum and Gas Station Owners Association, told Al-Monitor that he hopes the Palestinian government manages to find an alternative for the Israeli fuel and starts importing from another country, most notably from Russia. He emphasized that there is a need in the Palestinian territories to break free from the reliance on Israeli fuel as well as the relevant taxes that have caused the Palestinians to pay a price that is twice the international rate.