A Palestinian ministerial delegation headed to Egypt to discuss ways to boost relations in economy and trade, as part of the Palestinian government’s efforts to break economic ties with Israel. 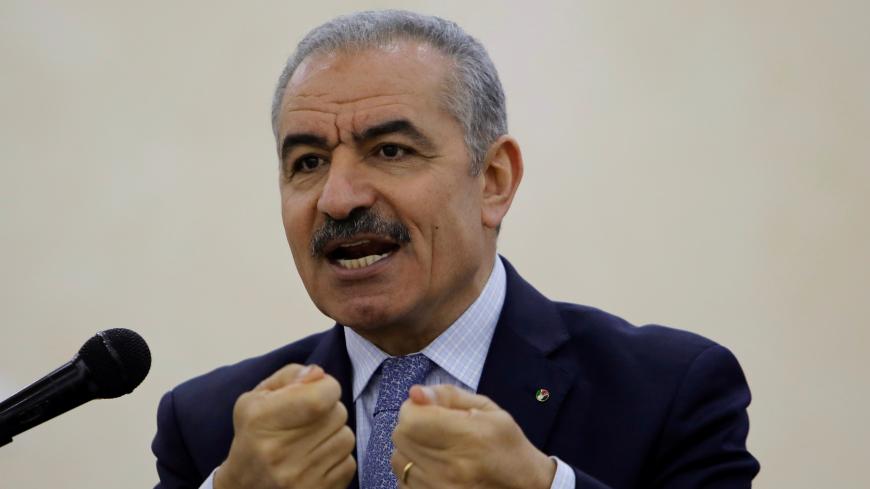 Palestinian Prime Minister Mohammad Shtayyeh gestures as he speaks during a cornerstone-laying ceremony for a water and energy project in Tubas, West Bank, June 20, 2019. - REUTERS/Raneen Sawafta

GAZA CITY, Gaza Strip — Following a meeting with his Egyptian counterpart in Cairo Oct. 9, Palestinian Prime Minister Mohammad Shtayyeh described his visit to Egypt as successful on all levels.

Speaking during a meeting with both delegations in Cairo, Shtayyeh noted that previous meetings were fruitful, especially regarding ways to alleviate the suffering of the citizens of the Gaza Strip and bolstering trade with Egypt. He added that the talks encouraged cooperation in the fields of health, agriculture and education as well as trade. He mentioned his government’s strategy of disengagement from Israel and seeking Arab support.

The Egyptian and Palestinian governments agreed during bilateral meetings to form work groups to cooperate on a plan to open up new economic horizons that would allow the Palestinian Authority to disengage from Israel.

Minister of National Economy in the Ramallah government Khaled al-Osaily told Raya Oct. 10 that it was agreed on to promote trade exchange and joint economic visits between Egyptian and Palestinian businessmen. Osaily had told Wafa Oct. 8 that Egyptian products will soon replace Israeli products in Palestinian markets as part of the government’s strategy of economic disengagement from Israel.

Palestinian Minister of Foreign Affairs Riyad al-Maliki told Wafa Oct. 8 that the meeting between the Egyptian and Palestinian delegations in Cairo would set the stage for a new phase and might even become a regular event between Cairo and Ramallah. He noted that although the visit was long overdue, the attendance of a high number of ministers sends a clear message that the Palestinian government will develop relations with Cairo and build on them.

Palestinian government spokesperson Ibrahim Melhem announced the arrival of a ministerial delegation composed of 13 ministers and headed by Shtayyeh to Cairo Oct. 7 evening to discuss potential joint cooperation and exchange expertise in specialized fields; marking the first visit of its kind.

Melhem told Al-Monitor that, during the visit, economic and agricultural agreements were signed to boost exchange of trade and expertise between the two countries, in addition to signing agreements in the fields of higher education, energy and endowments. He noted that the visit gained exceptional momentum due to the pivotal Egyptian role in offering all sorts of aid and support for the Palestinian cause in international platforms.

On the economic disengagement from Israel through boosting trade exchange with Arab states, Melhem said that there are many opportunities to look for alternative markets for Israeli products, by seeking the import of Arab products.

Agreements with Arab countries will increase the possibility of trade exchange, thus reflecting positively on the financial treasury and improving the economic situation, he added.

Regarding the government’s inclination to establish more trade ties with other Arab countries, Melhem said, “The government looks forward to paying more visits to Gulf and Maghreb countries.”

Economics professor at Al-Azhar University in Gaza Mouin Rajab told Al-Monitor that the government is taking this step in the hope of disengaging from Israel economically, following systematic and escalating Israeli pressure and practices, most recently the tax revenue cuts and the quasi-total dependence on Israeli economy that have exhausted Palestinians and drained their resources.

He said, “The Palestinian government is opening up to neighboring Arab countries again, signing new economic agreements and reactivating the suspended ones.”

Rajab added that signing agreements and holding joint committees is not the rule, but seriousness and willingness from both parties are key. He noted that Israel’s violation of agreements with the PA should motivate the PA to renege on these agreements and to hold bilateral ones with Arab countries. He indicated that Palestinians must make an effort to liberate themselves from economic dependence on Israel.

Rajab argued that boosting relations with Egypt is important since they share geographic maritime and land borders that connect them. He said that the Palestinian rift impeded attempts to develop their trade and economic ties and explained that there are many chances to boost Palestinian economy through Egypt, as a port can be built or a trade gateway can be developed.

Economics professor at An-Najah University in Nablus Bakr Ashtiyi told Al-Monitor that Palestinians have limited economic recourse amid the PA’s financial crisis. They only have access to nearby Arab countries. Besides, Arab countries did not keep their promises to activate the safety net, as per which they should pay $100 million per month to the PA, if it faces a financial crisis.

He said, “I do not expect a major and actual Arab response, since Arab states do not have economic willingness toward the Palestinian cause. Arab states, especially Egypt, will offer only what the US allows. The US wants to pressure Palestinians into accepting the deal of the century, and it won’t allow them to be peace of mind otherwise.”

According to Ashtiyi, Israel does not want to lose its biggest purchasing power, since Palestinian imports from Israel reach 62%. Any agreement with Arab states would conflict with the 1994 Paris Protocol, which limited Palestinian trade exchange. He hoped the protocol would be amended and the united customs front with Israel would be eliminated to become economically independent from Israel.

He said, “I hope we can reach an understanding between Egypt, the PA and Hamas to bolster trade exchange so that everyone can benefit economically.”

He called on the government to boycott Israeli products by offering Palestinian substitutes, improving the quality of local products, boosting investment and halting security coordination, which would push Israel to fulfill the PA’s demands.