The Palestinian Authority weighs its options to import fuel from Iraq through Jordan as a step toward economic disengagement from Israel, but will the Paris Protocol allow it to do so? 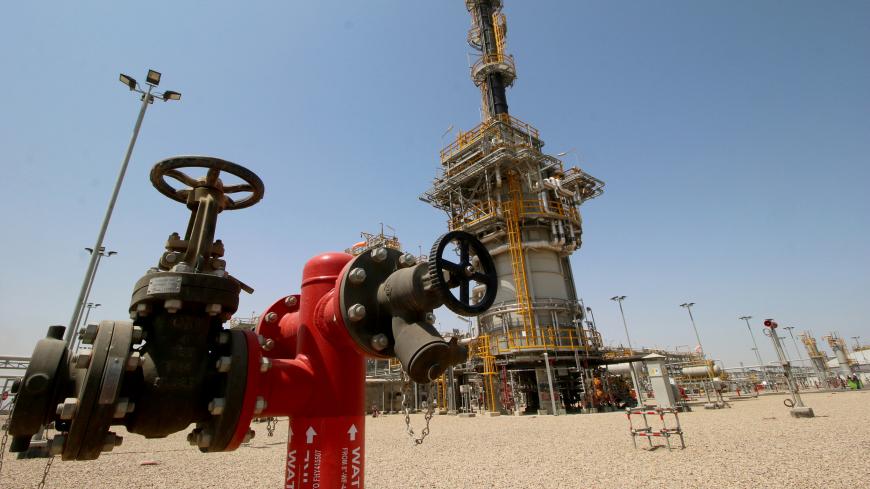 A view of the West Qurna-1 oil field, which is operated by ExxonMobil, is seen during the opening ceremony, Basra, Iraq, June 17, 2019. - REUTERS/Essam Al-Sudani

Iraqi media outlets confirmed that Shtayyeh discussed economic issues, such as the import of Iraqi fuel and Palestinian investment projects in Iraq.

During the one-day visit, the two sides discussed the possibility of achieving economic cooperation that enables the PA to overcome its economic crisis partially stemming from its refusal to receive any tax revenue funds deducted by Israel.

PA government spokesman Ibrahim Melhem told Al-Monitor that the meeting did not result in the signing of any agreements and was limited to understandings on the road map to be followed to achieve the PA’s economic disengagement from Israel, in particular in relation to imports of oil and oil derivatives.

On June 7, on the sidelines of the Jordanian-Palestinian Higher Committee meetings in Amman, Palestine and Jordan signed three memoranda of understanding in the fields of energy, health and transport. The memoranda included an energy pact allowing Palestine to refine any oil obtained that may be imported from Iraq in Jordan.

At the conclusion of its 30th session on Oct. 29, 2018, the PLO Central Council decided to end its economic reliance on Israel. In a statement it issued on that day, the council said, “In view of Israel's continued denial of the signed agreements and the ensuing obligations, the Palestinian Central Council … decides … economic disengagement on the grounds that the transitional phase, including the Paris Protocols, no longer exists, and on the basis for identifying practical pillars and steps to continue the process of transition from the stage of authority to the embodiment of the independence of a sovereign an independent state.”

The Palestinian move to import oil and oil derivatives from an Arab country in a bid to end economic reliance on Israel, albeit legal according to Article III(12) of the Paris Protocol, remains difficult to achieve according to Osama Nofal, director general of the Planning and Policy Department at the Gaza Ministry of Economy.

Nofal wondered how the PA is betting on bringing in fuel from Jordan to the West Bank, pursuant to Article III(13) of the Paris Protocol, which states that "the Palestinian side has the right to use all points of exit and entry in Israel," without taking into account Israel's refusal.

Israel, according to Nofal, does not want the fuel sold in the Palestinian territories to be marketed in its area of ​​jurisdiction. “Any fuel sold in the West Bank and Gaza under the Paris Protocol must be ‘marked in a distinctive color to differentiate it from the gasoline marketed in Israel,’ and must be sold at a lower price than the price in Israel, at a rate that does not exceed 15% of the official final consumer price in Israel.”

If the PA's goal is to achieve economic disengagement from Israel, why is it thinking of starting with fuel? To that question, Nofal answered, “The PA imports fuel from Israel at a price higher than in other Arab countries as a result of the taxes imposed on this fuel. Israel imposes the 100% Blue Tax on the price of a liter of fuel sold to the Palestinian consumer at $1.70, while the PA imposes its 16% value-added tax [VAT]. Should the PA import fuel directly from Iraq, the price of fuel would be lower and the PA would get all the revenues from the Blue Tax and the VAT without the need for any clearance with Israel.”

He noted, “The Palestinian and Israeli economies are so interrelated that economic disintegration would be difficult if not impossible in the short term. For example, 67% of the PA’s total imports are from Israel and the rest from the European Union and Arab countries. Around 131,000 Palestinian workers are employed inside Israel and they produce 37% of the West Bank’s gross domestic product. Should these workers lose their income the PA would suffer a huge loss amid its ongoing economic crisis. Add to this the geographical interdependence between the West Bank and Israel, which economically targets Palestinians by opening shopping centers for Palestinians selling products at prices lower than those in the West Bank.”

Nofal added, “If the PA wants to partially achieve economic disengagement, it must stop buying many recreational goods from Israel, encourage local products that would replace the Israeli imports and benefit from the Paris Protocol to import the goods specified in Paris Protocol’s Lists A1, A2 and B from Arab countries and reduce reliance on the Israeli economy.”

In a 2019 background paper on gradual economic disengagement from Israel, Palestine Economic Policy Research Institute-MAS said, “The Paris Protocol is an obstacle and is one of the most important obstacles that must be overcome to end economic dependence, but it is not the whole problem. There are margins that can be exploited.”

The paper also pointed to the total interrelation between the Palestinian and the Israeli economies in light of the political and economic hegemony imposed by Israel thanks to its military and political power.

However, MAS praised some Palestinian measures that could, in the long run, achieve a partial economic disengagement from Israel, including the PA's search for ways to dispense with the Israeli shekel and to fight customs tax evasion in areas under Israel’s security control.

The continued deduction by Israel of the PA’s tax revenue funds pushed the latter to seek the help of an Arab country to overcome its crisis. It seems it has found in Iraq an economic partner that can help it initiate its plan of economic disengagement from Israel. Whether it will succeed or not remains to be seen.