Palestinians are discussing the possibility of rejecting the Paris Protocol and disengaging economically from Israel following Israel's decision to withhold tax revenues from the Palestinian Authority. 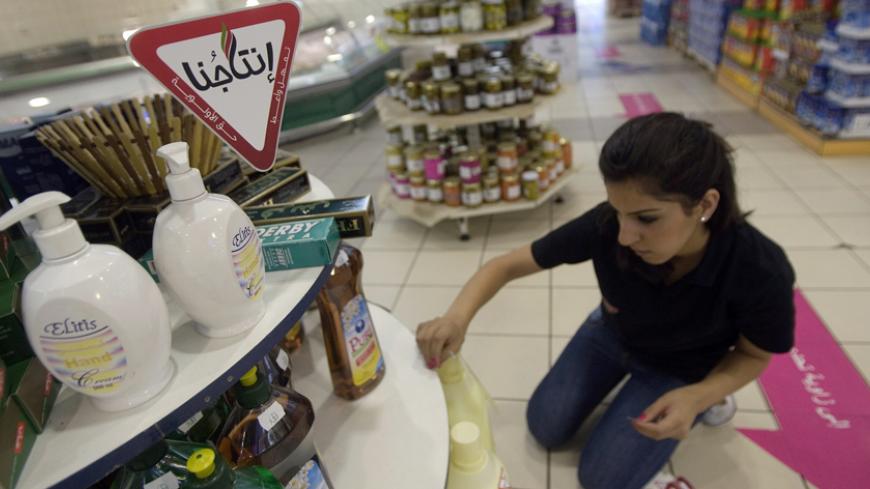 A Palestinian worker sticks "Intajuna" ("Our Products") stickers on Palestinian goods displayed in a supermarket in the West Bank city of Ramallah, Aug. 2, 2009. - REUTERS/Fadi Arouri

RAMALLAH, West Bank — The Palestinian Supreme National Committee decided Feb. 9 to ban products from the Israeli companies Tnuva, Strauss, Osem, Elite, Prigat and Jafora. The products of these food companies are extremely popular among Palestinians. The ban against them, which took effect Feb. 11, is the first in a series of measures to be taken in response to Israel’s Jan. 3 decision to withhold transferring Palestinian tax revenues and thus threatening the ability of the Palestinian Authority (PA) to fulfill its financial obligations. The chairman of the committee, Mahmoud al-Aloul, told Al-Monitor that the next step will be to “expand the list of Israeli companies and products that would be banned” to put pressure on the Israeli economy, for which the West Bank and Gaza are consumer markets.

Aloul said that the committee is working with government agencies, stating, “We had a meeting with the prime minister, who placed this issue on the cabinet’s table for discussion,” and asserted that the leadership is in the process of putting more distance between itself and Israel. Although the decision of the committee — consisting of representatives of the Palestine Liberation Organization (PLO) and parties from the private sector, unions and customs control — is not an official government decree, a source on the committee confirmed to Al-Monitor on condition of anonymity, adding, “Our work intersects with the various government agencies’ work.”

According to the same source, the decision to enact the ban is in line with the thinking of President Mahmoud Abbas, who said Feb. 13 during a meeting with Foreign Minister Jean Asselborn in Luxembourg, “We are forced to take challenging steps, should Israel not release our money.” The source also said that a PLO Central Council meeting scheduled for March will discuss a potential series of measures.

Such pronouncements and recent moves have raised questions on the Palestinian street about the next steps and concerning the PA’s ability to break from the 1994 Protocol on Economic Relations (or Paris Protocol), which regulates economic and commercial relations between the two parties. The Paris Protocol is an economic supplement to the Oslo Accord, which established a transitional period of five years, ending in 1999. The protocol is still theoretically in force, including several articles allowing Palestinians to work in Israel. Under the protocol, Israel is supposed to collect taxes (clearance revenues) on behalf of the PA for goods and products destined for Palestine via Israeli ports. Israel receives a 3% service charge and is supposed to transfer the tax funds to the PA on a monthly basis. The Paris Protocol also deals with the flow of goods and services between the two markets and security coordination.

In regard to the PA potentially rejecting the protocol and severing economic relations with Israel, Aloul said, “The PA is able to do so because [Israel] has not been committed to the protocol. Eventually, we are heading this way, as we can no longer abide by the agreement with Israel while it continues to breach all agreements.”

The tax revenues frozen by Israel represent 70% of PA government resources. On Jan. 27, the Palestinian government had announced that it was “in the process of taking several measures to recast economic relations with Israel and presented a series of measures to counter Israeli sanctions by encouraging dependency on local products and direct imports instead of importing through Israeli middlemen. This would contribute to lowering the funds needing to be cleared by Israel and increasing revenues from customs and sales taxes."

Bassem Khoury, a former minister of economy, told Al-Monitor that the essence of the Paris Protocol is “a customs union between Palestine and Israel, which allows the flow of goods and services between the economies freely and openly.” He also said, however, “Israel has undermined the importance of the Paris Protocol for the Palestinians, which lay in two main aspects, namely the free entry of goods from Palestine to Israel and vice versa. However, this is not being implemented, as Israel bans the entry of Palestinian goods into its market. This is not to mention that Israel has been reducing the number of Palestinian laborers, which, before the signing of the deal, ranged between 150,000 and 200,000 workers. Today, laborers are required to obtain special working permits.”

Khoury cited other economic problems the PA is currently having with Israel, including an attempt to “prevent or delay the trade in shekels between Palestine and Israel.” He also noted the terrorism-related compensation cases filed in US courts against the Arab Bank and PA involving billions of dollars.

Khoury said, “The PA is facing a difficult situation in the upcoming period, and the Israeli measures might lead to its collapse. However, in the meantime, the PA could try to break free from some of the economic dependencies through various means, such as expanding business relations with the Arab and Muslim worlds, which do not exceed 3%.”

Ragnar Gudmundsson, the World Bank representative in Palestine, has expressed pessimism about the performance of the Palestinian economy. Gudmundsson does not expect the economy to recover in 2015, citing “several adverse conditions, such as Israel’s decision not to turn over the clearance revenues." He said this crisis is the result of "an anticipated sharp decline in consumption and private investment, given low wage payments and the existing restrictions on funding.” According to the Palestinian Central Bureau of Statistics, gross domestic product declined 2.5% in 2014, resulting in a per capita GDP decrease of more than 5%.

​In light of Israel’s control over Palestinian borders and crossings and the degree of intertwined trade relations, many doubt the PA's ability to sever economic ties with Israel. In addition, Israel is the sole provider of electricity, oil and water, and the two entities have banking relations as well.

Samir Abdullah, general director of the Economic Policy Research Institute, told Al-Monitor, “The economic disintegration of the Palestinians is not yet on the table, but we can work on bending some provisions in the Paris Protocol in response to Israel's noncompliance with it." He went on, "Although Palestinians are bound by Israel's dominance on the ground and its control of domestic and foreign trade, the Palestinians can resort to certain measures, like importing foreign commodities directly without the need for Israel, as well as resorting to Egypt and Jordan to provide basics like electricity, cement and energy.”

Truly dissociating from the Paris Protocol is a step that would require strategic economic planning, including capacities to develop substitutes for products and investments and a readiness to bear some negative consequences.