The Palestinian government officially and for the first time ever decided to ban the entry of five Israeli companies' products into the West Bank, which will bolster the Palestinian economy. 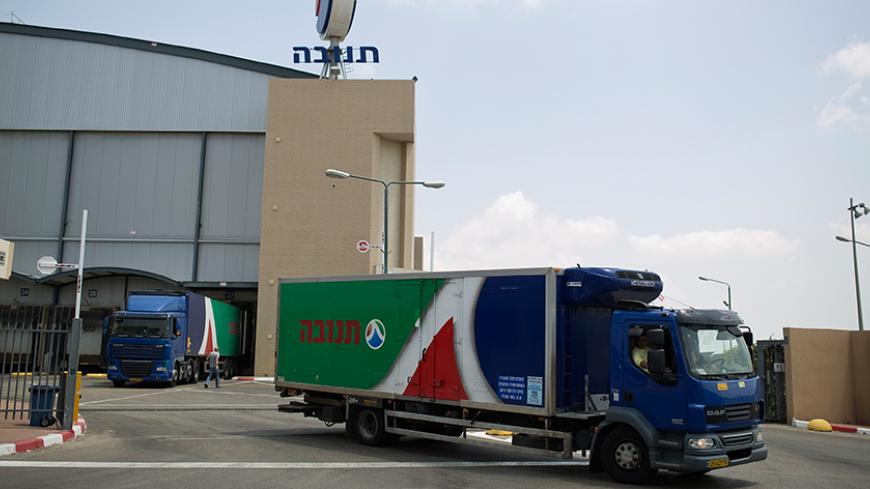 A Tnuva Dairy truck leaves the company's logistic center in the southern town of Kiryat Malachi, Israel, May 22, 2014. - REUTERS/Amir Cohen

Once the Palestinian decision was adopted, an implementing committee was formed by members from the Ministries of Economy, Agriculture and Health, in addition to the Palestine Customs and Revenue Authority. The latter began enforcement of the decision on the day of its adoption by barring the entry of three truckloads of Tapuzina products destined for the central West Bank city of Ramallah.

In this regard, the spokesman for the customs authority, Abdel Hakim Basaiteh, told Al-Monitor that the customs authority began, on the first day of the decision’s adoption, deploying roadblocks at the entrances of Palestinian provinces to prevent the entry of trucks carrying the products of banned companies. It also gave the importers of said products 10 days from the decision’s date to dispose of any products that they have in storage, while refraining from importing any such products anew.

Basaiteh said that during the 10-day prescribed period officers from the Customs and Revenue Authority would return trucks loaded with the products of banned companies to their sources of origin. Following said period, any such products would be considered contraband in Palestinian markets, and merchants associated therewith referred to the public prosecutor’s office.

Moreover, a Palestinian government source, who requested anonymity, told Al-Monitor that the decision adopted by the government was based on the principle of "reciprocity to counter Israeli actions. Therefore, the product ban shall remain in force as long as Israel continues to bar the entry of Palestinian products to Jerusalem and the territories occupied in 1948, and it shall be repealed once Israel goes back on its original decision.” However, this did not preclude discussing the implications and impact of the decision on the Palestinian economy, and its benefits on local products.

The director of Consumer Protection at the Ministry of Economy, Ibrahim al-Qadi, told Al-Monitor in that regard, “The implementation committee formed by the government has held a series of meetings with the Palestinian Food Industries Union to discuss securing the required quantity and quality of foodstuffs needed to replace Israeli products. The government’s decision came in response to the one taken by Israel and will encourage Palestinian companies to bolster investments in farms and food product factories, as well as establish new production lines, which would create new job opportunities in light of the anticipated doubling of domestic production.”

Qadi said, “In that context, the share of Israeli products banned from entry into Palestinian markets was approximately 55%, while the Jerusalem share of the five Palestinian companies’ products did not exceed 35% — the barring of which shall provide Palestinian factories with a market opportunity to double their production.”

The Paris Protocol, signed between the PLO and Israel on April 29, 1994, regulates economic relations between the two sides, allowing Palestinian companies to market their products in Israeli markets, and vice versa.

For his part, the director general of policy and economic studies at the Ministry of Economy and spokesman for the ministry, Azmi Abdul Rahman, told Al-Monitor that the Palestinian decision was not an escalatory move targeting Israel, but came in response to the latter’s decision against Palestinian companies — for the Palestinian economy is weak and cannot withstand being isolated from global markets, including those in Israel. But overdependence on the Israeli economy was troublesome and detrimental because the Israeli decision represented a blatant political affront.

Concerning the possibility that the Palestinian decision be expanded to include other companies, Abdul Rahman said, “At present, we do not wish to escalate the situation any further. The Council of Ministers is capable of defining the economic policies at each point in time, and we stand ready to implement any decision taken by the government.”

In the same context, Birzeit University lecturer and economist Nasr Abdel Karim told Al-Monitor that the effects of the Palestinian decision are twofold: First, it shall provide an opportunity for Palestinian companies barred from Israeli markets to recoup some of their losses by marketing their products in the West Bank. Second, it shall inflict losses upon Israeli companies deprived of an opportunity to sell their products in Palestinian markets.

He said, “Strategically, the decision will re-establish faith in Palestine’s sovereignty over its economy, albeit partially, as well as restore balance in favor of national products in the local marketplace. The decision will also provide Palestinian companies with an opportunity to sell their products in those local markets, which will encourage capital investment in the manufacturing, food and agricultural sectors.”

Concerning the ramifications of the decision on the Paris Protocol, Abdul Karim said, “Israel has not been implementing the provisions of the protocol for years, and the latest Palestinian decision came in response to a similar Israeli decision. Therefore, Israel cannot claim that the Palestinian Authority is reneging on its obligations under the protocol.”

Abdel Karim added that the Palestinian decision needs to be further expanded and included in the global boycott, divestment and sanctions campaign against Israel, thus inflicting greater damage on the Israeli economy.

Despite the decision entering into force, the real litmus test for the government shall remain its ability to continue its enforcement and not be forced to repeal it, in light of the growing political and economic calls voiced by the PLO’s Central Council, the public boycott campaigns, the Palestinian parties, and rights and civil society groups, and to go on the offensive and dissociate from Israel politically, economically and in matters of security.