Palestinian businesses are seeing a spike in activity as locals are increasingly searching for Palestinian alternatives to Israeli products. 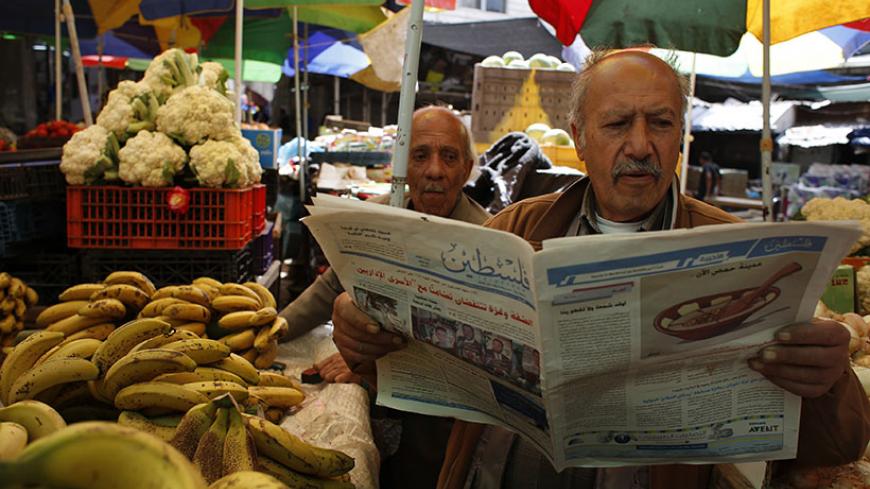 A Palestinian man selling fruit and vegetables reads a copy of a pro-Hamas newspaper at a market in Ramallah, May 10, 2014. - REUTERS/Mohamad Torokman

RAMALLAH, West Bank — In a convenience store in Ramallah, Muhammad Ali, 9, asked his mother to buy him some juice, but told her, “I do not want an Israeli one.” When Al-Monitor asked him why, he replied, “Because they are killing the children in Gaza.”

This child may not be aware that there are thousands of Palestinians in the West Bank and Gaza Strip who are currently boycotting Israeli products in response to public and youth campaigns. There are posters calling for the boycott everywhere in the West Bank.

It is not yet clear what impact this will have on either the Israeli or Palestinian economy, but analysts and campaign organizers say this is not just about economy. Khaled Mansour, a leading activist in the boycott and a member of the Palestinian People’s Party, believes that “this should be a way of living in Palestinian society.” Birzeit University academic and economic analyst Naser Abdul Kareem said, “The campaigns to boycott Israeli products go beyond the economic repercussions because this is a patriotic and moral duty that contributes, even if only partially, in eliminating the economic dependence on Israel.”

The head of the Palestinian Central Bureau of Statistics, Oula Awad, told Al-Monitor that the effects of the boycott campaigns have not yet appeared in the official data. She said more than 70% of Palestinian imports come from Israel or through it.

According to Awad, the Palestinian market is the most important for the Israeli market, as the imports from Israel are worth $4 billion-$4.5 billion, while exports do not exceed half a billion dollars.

Although the effects of the boycott cannot be estimated in figures and numbers, there are indications showing that the boycotts have gained momentum and expanded in the West Bank districts.

According to the Palestinian Central Bureau of Statistics, Palestinian exports to Israel increased during May 2014 by 7.1%, compared to the previous month. This accounted for 86.5% of the total value of exports. Meanwhile, imports from Israel decreased by 7.3% compared to the past month, accounting for 65.3% of the total value of imports in one month.

A TV report on Israel’s Channel 10, broadcast on Aug. 15, said, “Sales of Israeli products in the West Bank decreased by 50% due to the boycott accompanying the Israeli aggression on the Gaza Strip.” The report added, “Some factories closed some of their production lines due to the drop in sales.”

Increased demand for Palestinian products is an indicator that the boycott campaign is having an impact, according to the director-general of Policy and Economic Studies and spokesman for the Ministry of Economy, Azmi Abdul Rahman. “The impact of the boycott campaign is yet to be measured, but there are important indicators, such as increased demand for Palestinian products that provide substitutes for the Israeli products,” he told Al-Monitor.

The effects of the boycott campaigns started to appear in Palestinian factories and companies offering substitutes for Israeli products, especially in the dairy industry, which is trying to offer an alternative for Israeli Tnuva dairy products.

Amjad al-Mouhtaseb, sales manager of Al-Junaidi company, one of the biggest Palestinian dairy companies, told Al-Monitor, “The boycott campaign has reflected positively on the company and its product sales, some of which have increased. In the past two weeks, the sales of the company increased by 15%. This applies to other companies, too. The Palestinian dairy companies used to have a 55-60% share in the past, but now their share exceeds 80%.”

This production increase also has affected work hours. Mouhtaseb confirmed that “work hours have been added in the company’s factories, and 40 new workers have been hired.”

Only a few weeks have passed since the beginning of the boycott, but its repercussions have already started to appear on several levels. The director-general of the General Production Management in the Ministry of National Economy, Manal Farhat, said in a news release, “The share of the Palestinian local product in the Palestinian consumer’s basket is expected to witness an increase of at least 12% to 25% in the short run. We will witness a good investment activity that will have positive effects on the components of the economic process.”

She added, “The share of the food industry in the consumer’s basket will witness a 60% increase, and many factories, given their increased production capacity, have already hired a large number of evening workers.”

Abdul Rahman said, “The campaign to boycott Israeli products intersects with the policies of the government and the Ministry of Economy. They are in line with the development policies that the ministry put forward until 2016, in an attempt to increase the shares of national production sectors in the local market to 35% and decrease unemployment from 26% to around 18%.”

“With $1 billion invested in production, 70,000-100,000 job opportunities will be created. The continuing boycott for Israeli products will largely contribute to decreasing unemployment and poverty and enhancing the financial sustainability of the Palestinian government,” he added.

Abdel Karim of Birzeit University said that while the Palestinians should continue with their boycott, it is unlikely to change Israel’s policies. “The boycott is important on the political, moral and national levels. It should become a way of life. There are economic repercussions for the boycott of Israel, but there are basic goods that Palestinians cannot boycott, like fuel, electricity, cement and water,” he told Al-Monitor.

Abdel Karim said that Palestinians probably would only be able to boycott approximately $600 million worth of Israeli goods, which is a pinch of salt considering Israel’s overall trade volume is $160 billion. “The value of basic goods imported from Israel reaches $3 billion. There are also around $1 billion worth of personal consumption goods, some of which are irreplaceable. This means that the Israeli products that can be boycotted are worth $600 million. This boycott harms Israel economically, but it won’t push it to change its politics and occupation plans. Israel’s trade is estimated at $160 billion. So, the Palestinians have much more to gain from the boycott than the Israelis have to lose,” he said.

Large sums of money need to be invested into Palestinian industry to decrease the Palestinian economy’s dependence on Israel.

“Around $1 billion has to be invested in the rehabilitation of agricultural lands and development of factories to provide Palestinian alternatives worth $600 million. This will create jobs for around 30,000 Palestinians and will contribute to freeing Palestinians from dependency on Israel, even if partially. It will also support the international boycott that worries Israel,” Abdel Karim added.

Khaled Mansour believes that the boycott should be institutionalized. “Citizens should vow to boycott Israel and turn this into a culture rooted in people through integrating it in the school and university curricula and in the mosque sermons.” He asked the political leadership to “take an intrinsic decision to stop dealing with Israel according to the Paris Economic Protocol.”

These campaigns come in light of the increasing international boycott campaigns on Israel economically, academically and culturally. Israel is deeply concerned about the growing economic boycott in Europe, which will create many obstacles to the export of Israeli agricultural and industrial products to Europe.