Governmental and nongovernmental parties in Palestine are trying to support the export sector in a bid to reduce the trade deficit and dependency on the Israeli economy. 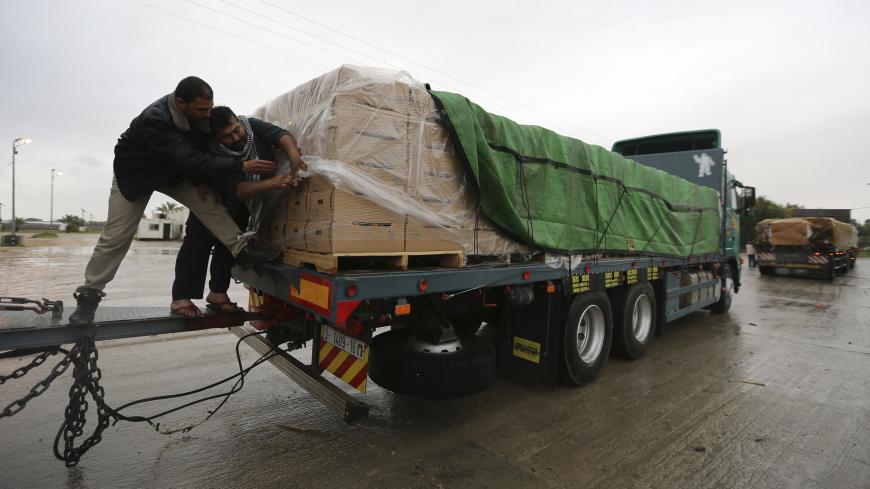 Economic experts, however, believe that this is a small rise with no impact on the Palestinian trade deficit. Palestinian imports reached $5.3 billion in 2017, according to the PCBS, while Gaza’s total exports amounted to $8.3 million, which constitutes 0.78% only of the total Palestinian exports for 2017. This reflects the bad situation of Gaza’s export sector, due to the Israeli blockade and the prevailing political conditions.

Imports from Israel constitute about 60.3% of the total Palestinian imports. This increase comes in tandem with the launching of campaigns to boycott Israeli products by the Boycott, Divestment and Sanctions movement as well as governmental and local nongovernmental organizations.

The spokesman for the Ministry of National Economy, Azmi Abdul Rahman, told Al-Monitor that the export sector in Palestine is crippled because of Israel’s control of all crossings and ports, with exports and imports being subject to Israeli procedures.

Abdul Rahman noted that the Paris Protocol granted the Israeli authorities 3% of the total value of taxes, in return for organizing the collections of funds and taxes for imports and exports to the Palestinian side, stressing that 75% of exports were carried out through Israeli mediation.

“Israel has taken over all Palestinian sectors to prevent us from achieving economic independence and to maintain a subordinate economy,” Abdul Rahman said.

He noted that the ministry has been working on reducing the economic dependence on Israel through the signing of trade agreements with friendly countries, attracting delegations and traders to encourage direct imports and exports, without any Israeli mediators that continue to stand in the way of Palestinian importers.

Abdul Rahman added that the economic reality in the Gaza Strip is harsh and is tied to security and political equations. He said that before the Israeli blockade Gaza’s exports were not major, but they have taken a nosedive since 2006. He explained that exports exceeding the $1 billion mark is not a breakthrough since the Palestinian trade deficit is over $4 billion in favor of imports.

“We are working according to the national strategic plan for exports, which aims at increasing the market share of local products in foreign markets, by meeting the requirements of the countries targeted for exportation, appointing economic attaches to the Palestinian embassies, overhauling the Palestinian Standards Institution [PSI] and enhancing the legal environment to encourage local production,” he said.

Meanwhile, Director General of the Palestine Trade Center (PALTRADE) Hanan Taha told Al-Monitor that the export sector has witnessed a remarkable development recently. She explained that Palestinian producers have become aware of the importance of exportation, as a result of initiatives by local and foreign NGOs that promote entering the foreign markets, providing local producers and suppliers with the necessary information to this effect.

She said that given the small local market, entering foreign markets is of paramount importance, pointing out that the Council of Ministers endorsed the decision to label Palestinian products, which was followed by the PALTRADE initiative “Made in Palestine” that was launched Sept. 27 in the United Arab Emirates to promote Palestinian products in regional and international markets.

“The Palestinian Exporter Award — which has been organized annually by PALTRADE since 2016 — has contributed to improving the image of the Palestinian product as well as its quality,” Taha said.

She noted that this move, however, does not rise up to the expected economic aspirations, as the export sector still needs a major breakthrough. Taha explained that Gaza should have contributed more in the upsurge of Palestinian exports but has instead seen a significant decline due to the sanctions, restrictions and weak production.

Commenting on the increase in Israeli imports, Taha said that “42% of the imports from Israel are in the energy and oil derivatives sector. This issue requires finding strategic alternatives as well as international and political agreements to end this exchange.”

Baker Shtayeh, a professor in the Faculty of Economics and Social Sciences at An-Najah National University in Nablus, told Al-Monitor that the export sector is very weak. He does not believe this small increase is a good indicator, noting that 83% of Palestinian exports go to Israel in the form of complementary industries, as part of subcontracts. Palestinian companies are contracted to produce some materials that are necessary for other industries, in a bid to benefit from cheap Palestinian man power and to evade taxes.

Shtayeh noted that less than 6% of exports are directed to the markets of neighboring countries, which proves the vulnerability of the Palestinian products and poor ability to compete even on Arab markets, where Palestinian goods are exempted from taxes and customs. He believes that this is due to the lack of confidence in the quality of the Palestinian products, since the PSI has basic standardization requirements that are not difficult to meet and standard certifications are granted easily.

Shtayeh called for strengthening trade relations with neighboring countries and for openness to new markets, such as East Africa, which has begun to form large consumer markets. He talked about some promising sectors in Palestine, namely in the stone and marble industry, pharmaceutical sector as well as furniture and date products.

He pointed out that Israel imposes restrictions on Palestinian importers if they seek to import without an Israeli mediator, as Palestinian products are subject to security screening, which is not the case with Israeli importers. Security clearance might take weeks or even months, resulting in major losses for Palestinian merchants, especially with products that have a short shelf life. He called upon the Palestinian government to set forth financial policies to compensate Palestinian importers, who import under the names of Israeli merchants, to avoid losses, or to find a viable diplomatic solution with Israel.