As part of Doha's continued efforts to boost the Palestinian economy, the Qatar Chamber of Commerce and Industry signed a cooperation agreement with the Palestinian Trade Center in a bid to strengthen their partnerships. 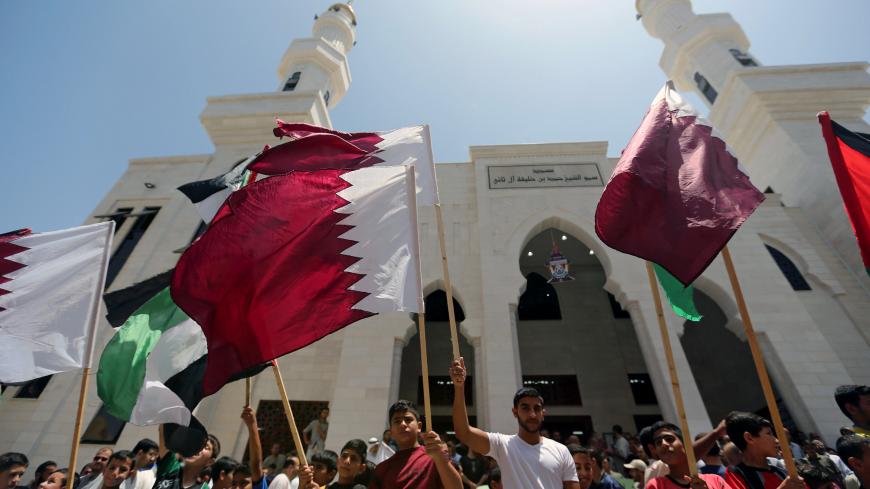 Palestinians take part in a rally in support of Qatar inside the Qatari-funded construction project "Hamad City" in the southern Gaza Strip, June 9, 2017. - REUTERS/Ibraheem Abu Mustafa

GAZA CITY, Gaza Strip — Qatar and Palestine are working to boost their bilateral trade, taking steps that one expert says will double their exchange over five years.

The Qatar Chamber of Commerce and Industry recently signed a cooperation agreement with the Palestine Trade Center (PalTrade) to increase partnership efforts between the two countries. During a Dec. 12 meeting in Doha that was also attended by Palestinian Ambassador to Qatar Amir Ghannam as well as Qatari and Palestinian businesspeople, the two sides agreed to allow nine Palestinian food and agriculture companies to export their products to the Qatari market.

“The Qatari private sector opens its arms to [our] Palestinian brothers. Qatari businessmen are keen on cooperating with their Palestinian counterparts to promote trade exchange between the two sides,” said the chamber's First Deputy Chairman Mohammed bin Ahmed Tuwar in a statement.

PalTrade is a non-profit organization that helps Palestinian companies export their products to Arab and international markets. In 2015, PalTrade introduced the Palestinian Exporter Award to promote trade.

“The new Palestinian food products that will be exported to the Qatari markets include mainly oil and milk and agricultural crops such as guava, citrus and herbs,” PalTrade Chairman Arafat Asfour told Al-Monitor.

He pointed out that the trade volume between the two countries stands at $30 million a year. With the new agreement, he expects that number to double during the next five years.

Asfour stressed that PalTrade encourages competition among Palestinian companies, urging them to continuously improve their products and to sell them at suitable prices by broadening their export horizons. He noted that Palestinian products have reached about 100 countries around the world.

Palestine exports its products to many Arab, European and international markets, the most important of which are Jordan and the United States, with receive the biggest shares of Palestinian exports, especially agricultural goods, stone and marble.

“This agreement will be the first of several others with Qatar and the Gulf countries in general for the exportation of industrial products as well, such as stone and marble,” Skik said, noting that PalTrade is seeking to enter all international markets.

Qatar has played a major role in supporting the Palestinian economy by establishing development, economic, social, infrastructure and health projects in the territories, especially the Gaza Strip. All told, the projects amounted to $1 billion in investments between 2012 and 2017, according to Arabi21 news.

“The trade agreement between Palestine and Qatar can be seen as part of Qatar’s political and economic [contributions] to improve the living conditions of the Palestinians, especially in the Gaza Strip, in a bid to promote security and calm in the Palestinian territories,” Mohammed Abu Jiyab, editor-in-chief of Al-Eqtisadiya newspaper in Gaza, told Al-Monitor.

He explained that Qatar, with the approval of Israel, provides financial grants to Palestinians to help them cope with the deteriorating economic situation. On Oct. 10, Qatar made a $150 million grant to the Gaza Strip, $15 million of which is to be paid out over six months as salaries for Gaza’s government employees. This is in addition to $60 million for fuel needed to run Gaza’s electric company over six months. On Nov. 6, Qatar announced it would provide $100 in cash aid to each of 50,000 poor families in Gaza.

“It is clear that Qatar’s [help] isn't limited to providing financial aid because of the humanitarian crisis in the Palestinian territories, but also aims to set the wheels of the Palestinian economy in motion by introducing Palestinian products in Qatari markets,” Jiyab added.

In 2017, for the first time since 1995 Palestinian exports exceeded the $1 billion mark — a 14.9% increase compared with 2016. Meanwhile, Palestinian imports reached almost $5.85 billion in 2017, according to statistics from the Palestinian Central Bureau of Statistics.

Palestinian exports are transported through Israel, which controls the five commercial crossings of the West Bank (Jalamah, Beituna, Tarqumiyah, Taybeh and Bissan). The goods travel inside the Israeli territories all the way to the crossings of Ben Gurion Airport and the ports of Haifa and Ashdod, and then make their way to international markets.

“Israel’s ongoing occupation of the Palestinian territories is one of the major obstacles to Palestinian exportation because of the tight Israeli security measures, screening and clearance of Palestinian goods,” Jamal Jawabra, secretary-general of the Federation of Palestinian Chambers of Commerce, Industry and Agriculture in the West Bank, told Al-Monitor.

He explained that containers are unloaded for manual inspections followed by X-rays and dogs. He noted that truckers are also frisked and in some cases asked to undress.

“Security clearance might take weeks and even months, resulting in major losses for the Palestinian merchants, especially with products with short shelf lives such as agricultural and food products,” Jawabra concluded.