Palestinians are seeking to achieve economic gains from the EU decision to label products from settlements, by increasing their exports to EU markets. 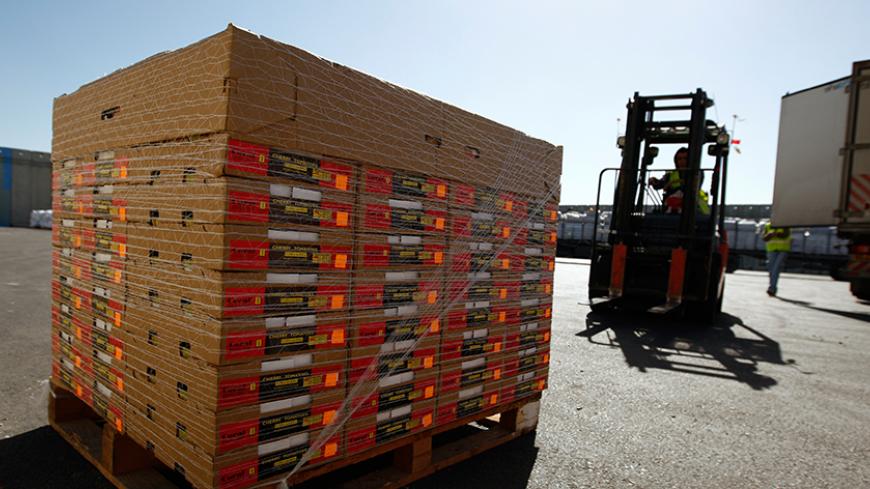 Boxes of cherry tomatoes from the Gaza Strip bound for Europe are seen at the Kerem Shalom crossing terminal, March 2, 2011. - REUTERS/Amir Cohen

RAMALLAH, West Bank — At a meeting in Brussels on Nov. 11, the European Commission decided to label the products that are made in the Israeli settlements within the West Bank and East Jerusalem. Although the Palestinian state and government welcomed the EU decision and perceived it as a political success against the settlements, it remains insufficient, which pushed Palestinians to demand further escalation to reach a boycott.

Through coordination between the Palestinian government and the private sector, Palestine is seeking to achieve economic advantages by replacing settlement products with Palestinian products in European cities.

The European Commission said in a statement Nov. 11 that its decision aims at labeling products coming from the territories under Israeli control since June 1967, which is a technical — rather than a political — measure to inform Europeans of the origin of the products. This is especially true since in terms of foodstuff and points of distribution, the origin of products should be mentioned on the labels, indicating whether they were manufactured in the settlements established on the 1967 occupied lands. This is considered a breach of international law and goes in line with the stance of the European Union, which considers settlements to be illegal, hindering the peace process between Palestinians and Israelis.

The Ministry of Economy spokesman, Azmi Abdul Rahman, told Al-Monitor that in cooperation with the Palestine Economic Policy Research Institute-MAS, the ministry will be preparing a detailed study to determine the output of Palestinian products in comparison with similar products and goods manufactured in the settlements, which have been labeled and exported to EU countries. These could therefore represent a substitute to settlement products. The Palestine-made products would be granted government privileges, such as lower licensing fees and infrastructure costs, to increase their production and enhance their quality.

Abdul Rahman said that the support by the Palestinian government for the replacement of settlement products by Palestinian products — through incentive measures such as decreasing licensing fees and introducing other facilities to reduce production costs and facilitate exportation — requires the development of government policies and cooperation with the private sector, to increase exports and improve the products' quality. According to him, the Palestinian economy would subsequently benefit, as increased production would result in lower unemployment and poverty in Palestinian society.

Abdul Rahman added that the EU market is a promising market for Palestinian products, such as vegetables, medicinal herbs, pharmaceutical products, leather and marble, and that this would raise the agricultural sector’s share in the gross domestic product, which, he said, presently stands at 4%.

The EU decision is an opportunity to activate the economic agreements between the Palestine Liberation Organization (PLO) and the EU, most notably the Interim Association Agreement, which was signed on Feb. 17, 1997; and the Interim Agreement with the European Free Trade Association (EFTA) states, which was signed between the EFTA states (namely Iceland, Liechtenstein, Norway and Switzerland) and the PLO on Nov. 30, 1998, and entered into force on July 1, 1999.

According to such treaties, industrial and marine products will be available on European markets without trade tariffs and with reduced tariffs on processed agricultural products.

The Interim Association Agreement signed in 1997 includes measures to achieve gradual trade liberalization, and sustainable economic and social development in the West Bank and the Gaza Strip. This is in addition to creating balanced economic and social relations between Palestine and the EU, achieving regional cooperation, further deepening comprehensive dialogues between both parties and forming the Union for the Mediterranean as decided in 2008 — as a relaunched Euro-Mediterranean partnership (the Barcelona Process).

The Interim Association Agreement also stipulates the implementation of the Palermo Protocol for harmonized rules of origin as a means to diagonal cumulation of origin with partners within the Euro-Mediterranean zone for export to Europe.

Meanwhile, the agreement with the EFTA states included the elimination of all trade tariffs for industrial goods between both sides, the elimination of non-tariff barriers, as well as other trade-related issues such as competition rules, intellectual property protection, public procurement, monopolies, aid, and payments and transfers.

Mazen Sinokrot, former minister of economy (2005-2006) and head of the Sinokrot Global Group — which is active in the export of agricultural and food products to Europe — told Al-Monitor that the EU decision is correlated with the enforcement of the EU-PLO economic agreements, which gives Palestinian products the right to a certificate of origin (called EUR.1) to benefit from a duty-free entrance to the EU, and exempts agricultural goods exported to EU market from tariffs.

For his part, the chairman of the Palestinian Federation of the Union of Chambers of Commerce, Agriculture and Industry, Khalil Rizk, told Al-Monitor that the federation has continued to establish joint economic councils and bilateral agreements with the EU chambers of commerce, to make it easier for Palestinian goods to enter the EU market.

The Palestinian desire to increase exports to EU markets is faced by obstacles such as the Israeli checkpoints and control over the airports and ports, where the exportation of goods is sometimes delayed, thus raising the cost of exports. The general director of marketing and crossings in the Agriculture Ministry, Tahsin al-Sakka, told Al-Monitor that this is evident in the Gaza Strip, for instance, which is preparing to export 500 tons of high-quality strawberries to Europe via Israel during the current season.

He said that strawberries exported from Gaza to the EU are of high quality and are planted according to the EU specifications and the GlobalGAP. The crop is harvested and assembled in the packing stations in Beit Lahia in the northern Gaza Strip, after being examined by agricultural inspectors. Then, they are kept in refrigerators until dawn when they are transferred through the Kerem Shalom crossing, which separates the Gaza Strip and the 1948 territories, to Israeli companies for export to Europe through Ben Gurion International Airport. All of Gaza’s products are exported in this way.

The export procedures are similar in the West Bank. Sinokrot, whose company exports dates, medicinal herbs and food products to Europe, said that empty containers are brought from the Israeli ports and packed in the company's factories in the Jordan Valley or Ramallah, before they are transported in a Palestinian truck to the Israeli checkpoints to be examined, and moved in an Israeli vehicle to Israeli ports for export.

Abdul Rahman said that 80% of Palestinian exports are made to or through Israel, where the volume of imports from Israel to Palestine exceeds $4.5 billion a year. Hence, Israel does not want the Palestinians to have an independent economy, as it has been profiting from the Palestinian market.

“So far, we are still using Israeli ports and agents for import and export activities, as well as the Israeli bar code, in the absence of a global export number for Palestinian products — although the products carry a Palestinian name,” Abdul Rahman added.

On Nov. 17, Palestinian Minister of Economy Abir Awda, said that there is an international movement, led by the Palestinian government, to include Palestine in the global standards organization GS1, and get a bar code for its products.

According to Awda, this bar code would serve as a means to preserve the national identity of local products and introduce them as independent items at a global level. In the past, Palestinian products had not been entitled to such a bar code since Palestine was not recognized as a state at the United Nations until 2012.

Palestinians are aware that the EU decision to label the products that come from the settlements does not mean that these products are boycotted and prevented from entering the EU market. Yet, the Palestinians consider it a political achievement against the settlements, which will encourage the EU countries to export, support their economy and take a serious stance against the settlements. They hope that their exports to EU markets increase, and that the EU in the future will completely boycott settlement products.