NGOs are calling on the EU to stop trade relations with Israeli settlements, which undermined Palestinians' ability to create a viable economy, Lena Odgaard reports. 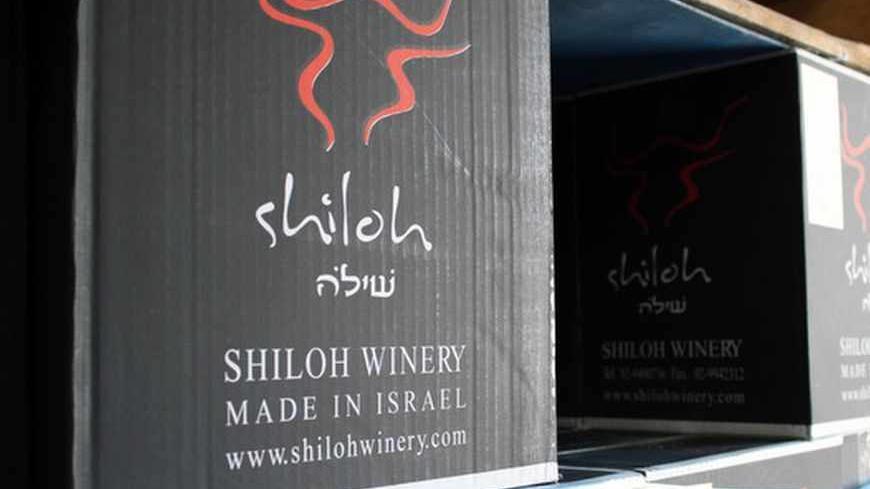 Boxes of wine from the West Bank settlement of Shiloh bear the words "Made in Israel." - Lena Odgaard

Newly planted date trees, only a meter high, are lined up in close rows in the hot desert outskirts of the ancient city of Jericho. They surround the offices of Nakheel Palestine, an agricultural company exporting Medjool dates from the West Bank's Jordan Valley. Like its trees, the company is still young and struggling to survive in a hot and hostile environment.

“In regards to farming, the main challenge is securing the land and finding the water to keep the trees alive and producing,” Maisa Manasrah, sales manager at Nakheel Palestine told Al-Monitor while walking in the fields of small date trees. She added that demolition orders on water wells and houses used by their farmers, threats of confiscation of land, lack of access to harbors and airports and reliance on Israel for importing fertilizer and chemicals make it difficult to establish a competitive business.

By contrast, the conditions for their competitors in Israeli settlements also located in the Jordan Valley are quite different.

“The farms in the settlements and the land are easy to get, and they are subsidized, so they have very low costs. Palestinians and settlers pay the same for labor working in this industry, so we end up having about a 25% cost difference in the actual product in the end, which makes it difficult for us to sell,” said Manasrah.

Most of Palestinian agricultural land is in the Israeli-controlled Area C, constituting more than 60% of the West Bank. According to Signe Fischer Smidt from the non-governmental organization (NGO) Danish Church Aid, the Palestinians in the West Bank have lost 40% of their agricultural land, two thirds of their grazing area and 80% of the groundwater. In the Oct. 2012 report, "Trading Away Peace," Danish Church Aid, together with 21 other NGOs, called on the European Union to stop their trade with Israeli settlements. The report showed that the EU imports about 15 times as much from settlements as from the Palestinians, in spite of the EU’s official policy on Israeli settlements being that they "are illegal under international law, constitute an obstacle to peace and threaten to make a two-state solution impossible."

As the EU constitutes Israel’s main trading partner, receiving over 20% of total Israeli exports with total trade reaching $39 billion in 2012, Europe could play a significant role in putting pressure on Israel when it comes to the issue of settlements. The report recommends that the EU immediately impose a labeling system for settlement products, followed by a ban and ensuring that public institutions refrain from investing in settlement companies.

Speaking to Al-Monitor at the Danish Church Aid’s offices in east Jerusalem, Smidt emphasized that it is not about banning Israeli products or hurting the Israeli economy. She pointed out that though settlement exports to the EU count for approximately $300 millions annually, they make up only 2% of all Israeli exports to the EU.

“Israel could easily close down its agricultural products in the Jordan Valley and do it somewhere else,” she said, adding that EU trade relations only serve to make the settlements profitable for the people living there, thereby encouraging more to move there and making it impossible for Palestinians to build their economy, further hindering a two-state solution.

In the West Bank settlement of Shiloh, Shiloh Winery winemaker Amichai Lourie told Al-Monitor that business was thriving. Not least during the Jewish holiday of Passover, the company has seen a rise in exports to an increasing number of countries, while previous customers have demanded larger quantities. In the warehouse, surrounded by boxes of wine labeled "Made in Israel," Lourie said that he did not fear an EU labeling policy since many of his customers buy the wine because of where it is from.

“Personally, I see Shiloh as Israel, just like Tel Aviv and Jerusalem,” he said, and explained that he was proud to take part in bringing back the culture of wine production to Shiloh, which was an important Jewish city several millennia ago.

“After thousands of years, we came back to where we are supposed to be.”

In recent months, trade relations with Israeli settlements have been a recurrent theme on the EU agenda. In February, EU Foreign-Policy chief Catherine Ashton called on EU foreign ministers to ensure their practices were in compliance with EU legislation. Later the same month, the annual report of the European Heads of Mission to the Palestinian Authority was leaked, containing clear criticism of Israel’s continuous settlement expansion as "systematic, deliberate and provocative." The report also advised strict application of the EU-Israel Association Agreement — which excludes settlement companies from preferential tariffs — and encouraged clearer labeling of settlement products. Signe Fischer Smidt welcomes the EU's focus on the area, but remains skeptical.

Though a mandatory proof of origin on all imported goods to the EU must clearly specify postal code and city, there have been numerous cases of cheating, repackaging and mislabeling.

“It’s great that the EU wants to actually implement their own legislation, but we can’t really praise them for that. That should have been done a long time ago,” she said.

Taking a step further, a few EU countries — including the UK, Denmark and recently the Netherlands — have introduced labeling guidelines for retailers to make it easier for consumers to make informed choices when they drop groceries into their shopping cart. But since these guidelines are voluntary and unclear — guidelines in Denmark, for instance, advise retailers to label "West Bank" produce without specifying whether Palestinian or from settlements — Smidt fears they won’t make much of a difference.