Will new agreement lead to increase in Palestinian exports?

A new Palestinian-Jordanian agreement will allow the export of goods in small containers to Jordan for the first time ever, which Palestinians hope will increase their global exports. 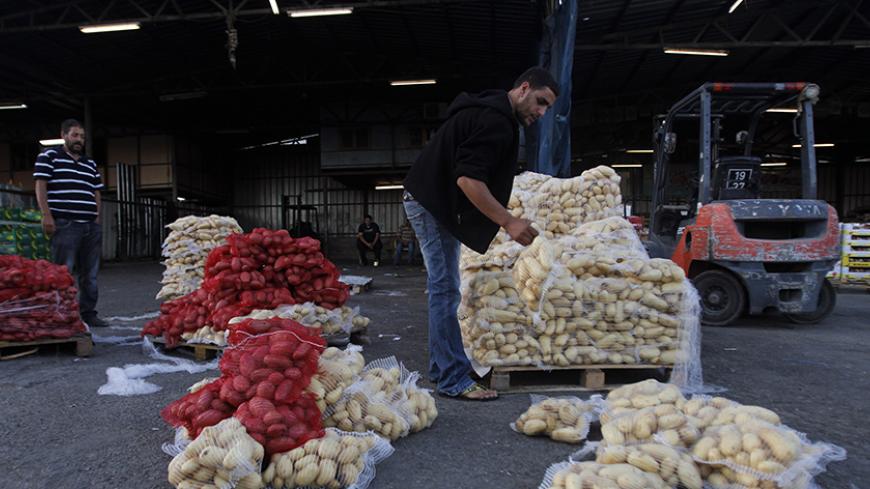 A worker arranges sacks of potatoes on a pallet at a wholesale vegetable and fruit market in the West Bank village of Beita, near Nablus, Sept. 2, 2012. - REUTERS/Mohamad Torokman

RAMALLAH, West Bank — The Palestinian Ministry of Economy announced May 6 that it reached an agreement with the Hashemite Kingdom of Jordan on the export of Palestinian products to Jordan in small 20-foot containers via the King Hussein (Allenby) Bridge.

The agreement aims to help the Palestinians reduce the financial cost of exports while maintaining the quality of the goods, especially for perishable, agricultural and fragile products. The agreement will increase the volume of trade exchange with Jordan and other countries across the world.

The agreement, which was sponsored by international parties such as the Quartet, came as part of the implementation of the Palestinian five-year National Export Strategy, developed under the supervision of the International Trade Center (ITC) and funded by the European Union. The strategy was launched by the government on June 1, 2015, in the presence of ITC Executive Director Arancha Gonzalez and EU representative John Gatt-Rutter, and is expected to lead to an overall growth in exports over the next five years by 67%, with an annual growth rate of 13%.

Palestinian Minister of Economy Abeer Odeh told Al-Monitor, “This agreement will help increase the volume of Palestinian exports. It will speed the transfer of goods and preserve their quality, as opposed to the current export mechanism whereby trucks are emptied and inspected on the Israeli side of the border. Products are then loaded onto Jordanian trucks.”

Asked about the new export procedures, Odeh said, “Palestinian export containers will be scanned by both Israel and Jordan”; further details will be decided on in the coming days.

The King Hussein border crossing is the only outlet for import and export between the West Bank, Jordan and the rest of the world, which is controlled by the Israelis. In other words, Palestinian exports are subject to complicated inspection procedures, and the new agreement is a step toward finding a commercial land crossing between Palestine and Jordan.

Timothy Williams, an expert in economic affairs and trade movement between Palestine, Jordan and Israel in the office of the Quartet, announced on Sept. 8, “The Quartet is working in coordination with the Palestinian, Jordanian and Israeli governments to facilitate the export of Palestinian products in containers to Jordan. The United States donated a scanner to the Jordanian side, while the Netherlands donated another device to the Israeli side.”

On Oct. 20, 2013, the Israeli government approved the establishment of a trade zone on the Israeli side of the King Hussein border crossing with Dutch support in order to facilitate the transport of Palestinian commercial containers.

However, despite the announcement of the agreement, the implementation details are yet to be revealed, which raises several questions, especially regarding the working hours at the crossing. In this context, the Palestinian Ministry of Economy and the Jordanian Ministry of Industry and Trade held a meeting May 16 to discuss the implementation mechanisms of the decision.

In the same context, the chairman of the Palestinian Trade Center, Ibrahim Barham, told Al-Monitor, “In the event the agreement reached under the supervision of the office of the Quartet in Jerusalem is implemented away from any Israeli procrastination, then it will positively impact Palestinian exports because it will save time, effort and cost and will maintain the quality of the exported goods.”

Barham said that the implementation mechanism is not clear yet, and work is underway to set it up; once developed, the pilot phase of the scanner system will start.

“It is our right as Palestinians to have the crossing open 24 hours without the Israelis controlling or shutting it down. This would have positive repercussions on the export movement and the import of raw materials that are needed in the industrial cities of the West Bank. Israel’s closing of the crossing would hinder the profits desired by the agreement,” Barham said.

For his part, Mazen Sinokrot, the chairman of the Sinokrot Global Group, told Al-Monitor, “The positive results of the container export system and the scanner depend on the Israeli side’s working hours. Workers on the Israeli side of the border always find pretexts to hinder the movement of shipments, and they often subject them to long inspections.”

Sinokrot added, “We are optimistic about the agreement until proven otherwise. [This positive result requires] the permanent opening of the border crossing away from any bureaucratic measures. It also requires reducing the cost of the exports and allowing the loading of products in containers at the [producing] companies’ factories and warehouses in a way that contributes to increasing Palestinian exports to Jordan and other countries. This will encourage the private sector to invest in new production sectors that can be of benefit to the Palestinian economy.”

Abdul Rahman told Al-Monitor, “This agreement shows a new Palestinian trend, which consists of using Jordan as an economic and political hub to open up to the world, strengthen trade and reduce the size of economic and trade relations with Israel.”

Amid optimism about the new agreement’s positive impact on the Palestinian economy and its contribution to raise the balance of trade and increase the volume of exports, the tangible results remain linked to the effectiveness of the implementation of the agreement in line with the Palestinians’ aspirations, away from any Israeli obstacles.