The first meeting in three years of the Joint Higher Jordanian-Palestinian Committee was deemed positive, with agreements signed in a number of sectors. 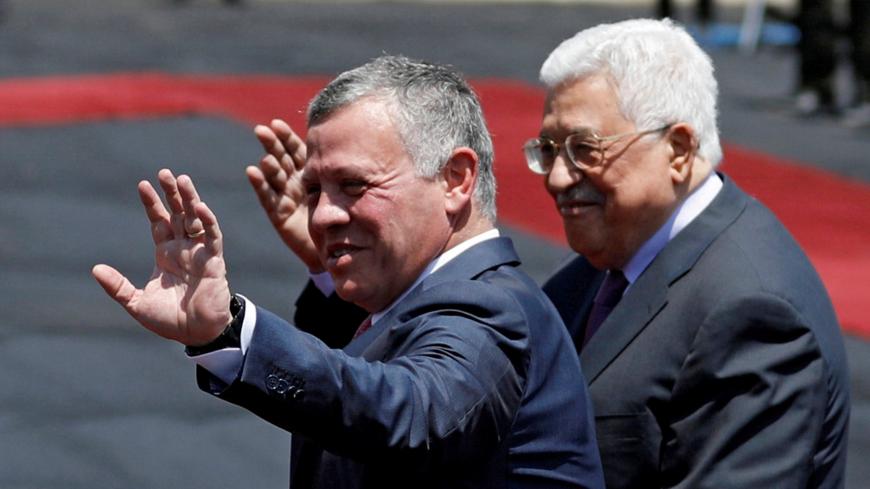 After years of lackluster economic cooperation, Palestinian-Jordanian relations have warmed considerably. The Joint Jordanian-Palestinian Higher Committee, which has not met in three years, held high-level meetings in Amman Sept. 27. Ministers and businesspersons from both sides attended a flurry of marathon gatherings, which resulted in the signing of five agreements at the Prime Ministry during a summit headed by Jordanian Prime Minister Hani al-Mulki and Palestinian Prime Minister Rami Hamdallah. Both sides described the atmosphere at the signing ceremony as excellent.

The official Jordanian news agency, Petra, and the official Palestinian agency, Wafa, issued long, almost identical press releases, which were posted to government websites. Maha Sayegh, economic attache at the Palestinian Embassy in Amman, told Al-Monitor that the meetings were extremely courteous and collegial. “I have attended many similar meetings of the joint committee, and I don’t recall any meeting as warm and friendly as this one,” she said.

According to Sayegh, both parties appeared to be genuinely interested in moving the cooperative process forward, especially on the economic track. “Whenever we reached an impasse, and if one side insisted on their position, the other side compromised in order to accomplish an agreed-to deal,” she remarked.

The Joint Jordanian-Palestinian Higher Committee was established in 1995 after the inauguration of the first Palestinian government stemming from the Oslo Accords. The committee’s goals are to strengthen and improve relations between Palestinians and Jordanians on all fronts. Its efforts, however, have often been affected by fluctuations in tensions or improvements in political relations, although the aim was for committee agreements to become institutional in nature, devoid of politics.

The three-year gap between meetings came about as a result of tensions and miscommunications on both sides. Palestinian pressure on Amman in December 2014 to table a statehood motion at the UN Security Council when Jordan served as chair contributed to the tensions. The measure failed to garner the requisite nine votes.

As if to reflect the importance of the September meeting, Hamdallah was greeted with the protocol afforded an official visit by a head of state, replete with national anthems and a review of the guards at the Prime Ministry. Such trappings would usually have been reserved for President Mahmoud Abbas and King Abdullah and performed at the Royal Palace.

“Mulki expressed hope that the committee meeting would stimulate increased trade exchange between the two sides, which stood at $176 million in 2016 and $90 million in the first half of 2017,” the Jordan Times cited Petra as reporting. WAFA echoed similarly hopeful sentiments and reflected on the importance of the summit. It also reported that Hamdallah discussed with Mulki the burdens facing his government’s institutional and development work in addition to the humanitarian suffering of the Palestinians as a result of Israeli practices.

“Under these circumstances — a military occupation and a 70% drop in foreign assistance — the Palestinian government has been working on maximizing the benefits of local resources and rationalizing expenditure and the use of available resources,” Hamdallah was quoted by Wafa as saying.

Sayegh asserted, “We were able to eliminate or simplify most of the obstacles that existed in terms of economic trade between Palestine and Jordan.” She further explained that one of the most important breakthroughs is that Jordan and Palestine acted to speed up the transfer of goods. “A new scanner has been set up at the King Hussein Bridge, which will eliminate the long delays and costly method of transporting goods using the back-to-back system of transport,” she said.

The scanner, donated by the US government, had been sitting unused since the outbreak of the Islamic State crisis on the Jordan-Iraq border in 2015. In a back-to-back exchange of goods, a Jordanian truck would back up to a Palestinian truck, and the goods would be transferred from one truck to the other, or vice versa, a procedure that is costly and cumbersome.

Eric Barbee, spokesman for the US Embassy in Amman, confirmed to Al-Monitor that the Department of State’s Export Control and Related Border Security program had donated the mobile scanner and installed it. Barbee explained, “The scanner serves two important functions: one, to help facilitate and expand trade between Jordan and the West Bank by decreasing the inspection and processing time for shipments; and two, to help increase Jordan’s capabilities to inspect vehicles and cargo for weapons, hazardous materials, undeclared cargo and other items of concern.” With inspections conducted by the scanner, trucks loaded with goods can proceed across the border, eliminating the need for back-to-back loading.

Attendees of the Amman meetings stressed the need to complete joint projects to both their benefits, the most important being the Red Sea–Dead Sea Water Conveyance Project, to reverse water loss in the Dead Sea while also developing new sources of energy and improving farming, and Corridor for Peace and Prosperity, a Japanese initiative in the Jordan Valley that seeks to enhance development and peace efforts by exporting Palestinian agricultural products via Jordan.

According to Petra, Jordanian Industry, Trade and Supply Minister Yarub Qudah, who co-chaired meetings of the preparatory committee of the Joint Jordanian-Palestinian Higher Committee along with Palestinian Economy Minister Abeer Odeh, said that the two sides exhibited a high degree of “determination” to take cooperation to a new level. Qudah was quoted as saying that both sides had agreed to do more to encourage the private sector to increase investments, with the Palestinians expressing interest in benefiting from Jordan’s experience with industrial estates.