The Palestinian Authority and Jordan are in the process of establishing a logistics zone to facilitate and expand the bilateral trade exchange and boost import and export, within the framework of the PA's plan of breaking away from the Israeli economy. 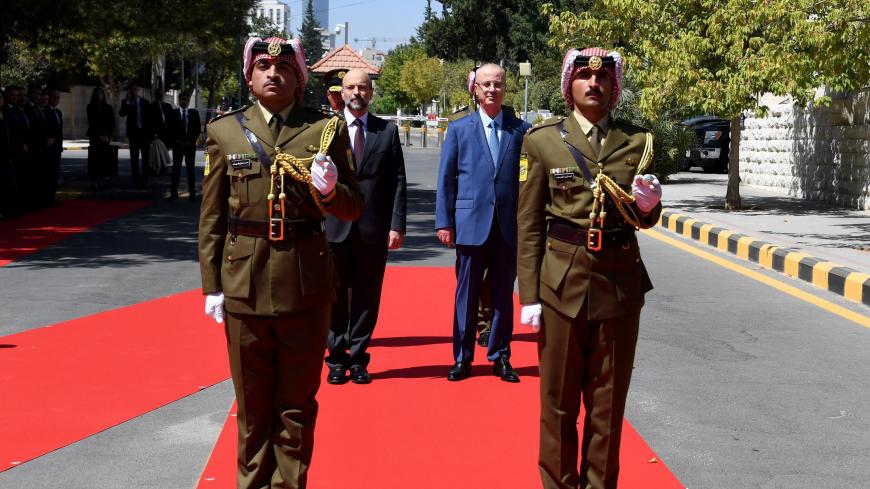 RAMALLAH, West Bank — A joint Palestinian-Jordanian team of customs administrations, in coordination with the Ministries of Industry, Economy and Transport of both countries, is set to begin consultations over the coming days and weeks to discuss details of the establishment of a logistics zone for trade exchange between the two sides.

On the sidelines of the meetings of the Joint Jordanian-Palestinian ministerial committee held in Amman on July 6-7, the two sides agreed to establish the logistics zone on the Jordanian side of the border in Shouneh area. The objective is to expand activity and trade between Palestine and Jordan as well as encourage import and export through the Jordanian crossings to and from Palestine.

This step is complementary to a number of issues and memoranda of understandings agreed upon during the visit of former Prime Minister Rami Hamdallah to Jordan on Sept. 17, 2018. The most important of these agreements are the increase in trade between the two countries, the increase of imports from Jordan to match a value of $0.5 billion and the establishment of the logistics zone.

Palestinian Economy Minister Khaled al-Asaily told Al-Monitor that the joint logistics zone with a capital of 30 million Jordanian dinars ($42 million) was agreed upon by the two governments to facilitate imports and exports between them.

He noted that this zone will allow Palestinian products to reach more Arab and international markets, and is part of the Palestinian government's vision of gradual disengagement from Israel. “This zone will allow us to implement our strategy of replacing Israeli products with Arab ones in the Palestinian markets, in addition to supporting national products that will have a greater chance of reaching the Arab and international markets,” he said.

Asaily stressed that this zone will increase the volume of trade exchange between the two countries, which reached in 2017 about $230 million, of which $153 million was in imports of goods from Jordan and $77 million in exports to Jordan.

The logistics zone’s file was one of the most important issues presented by Jordanian Minister of Industry, Trade and Supply Tariq Hammouri during his visit to the West Bank July 29. Hammouri headed a high-level delegation of the heads of the Jordanian Chambers of Commerce and Industry and members of the Jordanian Senate and parliament. During the visit, Hammouri inaugurated the fifth exhibition of Jordanian industries in the northern West Bank town of Jenin.

The Palestinian Authority (PA) is counting on Jordan to be the gateway to its economic disengagement from Israel by strengthening economic and trade cooperation with it, as well as with other Arab countries. Shtayyeh said July 8 that the visit of the Palestinian ministerial delegation to Jordan would establish a new phase of cooperation between the two countries in order to eliminate the Palestinian dependency on Israel.

A Palestinian Central Bureau of Statistics survey published July 21 showed that Palestinian exports to Israel during May rose by 4% compared with April, reaching 91% of the total value of exports for May.

Meanwhile, exports to the rest of the world fell by 33% compared to the previous month, amounting to $8.1 million.

Jordan is the West Bank’s only land port to the world, and thus the logistics zone will have large warehouses where the goods are unloaded and then transported in containers destined for ports. This would speed up the process of exports and imports between the two countries or between Palestine and other international markets.

Secretary-General of the Palestinian Cabinet Amjad Ghanem told Al-Monitor that “the agreement reached with Jordan on the establishment of the logistics zone is very important to us as Palestinians,” pointing out that details regarding the operation of the area will be agreed upon by the joint team.

Ghanem said that the zone will serve the agricultural industrial zone in the city of Jericho, which is 7 kilometers (4 miles) from the King Hussein Bridge. The logistics area will be a starting point between the industrial zone and the Arab and international markets, helping raise the volume of exports to the Arab world, he noted.

“The Palestinian government is counting on this zone to implement its strategic plan of disengaging from the Israeli economy, increasing exports, promoting local products globally, facilitating the movement of goods and encouraging businessmen to invest in Palestine,” Ghanem added.

Palestinian Agriculture Minister Riad Attari told Al-Monitor that he agreed with his Jordanian counterpart to complete all the measures required to launch the work of the joint agricultural company.

The joint agriculture marketing company was established in August 2017. The Jordanian and Palestinian Ministries of Agriculture signed a memorandum on April 25, 2018, in Jordan to establish a Jordanian company for the marketing of horticultural products with a capital of $20 million. The company shall be owned 50/50 by the two governments.

Attari stressed that the company will market the Jordanian and Palestinian products in global markets, benefiting from the two countries' trade agreements with foreign countries, pointing out that efforts in the coming weeks will focus on completing all necessary measures to establish this company.

Since its formation in April, the Palestinian government has attached great importance to the economic relations with Jordan. The PA seems to be relying on Jordan as a gateway for expanding the Palestinian economy and trade and opening up to Arab and international markets in order to no longer be dependent on Israel. The logistics zone is one of the tools to achieve this.