The Palestinian Ministry of Finance is increasing customs duties on a range of goods, allegedly to protect local production, in light of a budget deficit of $1.07 billion in 2017 and threats of a drop in international aid to the PA. 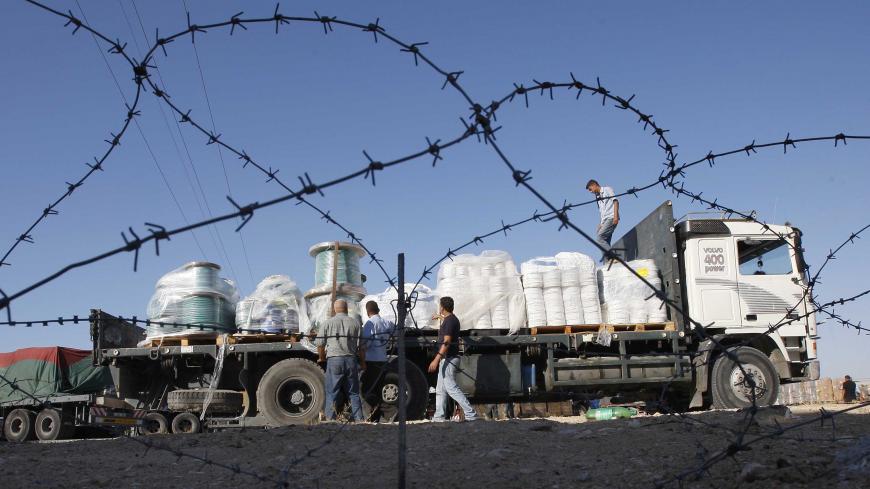 GAZA CITY, Gaza Strip — Palestinian President Mahmoud Abbas issued a decree Jan. 3 canceling tax exemptions in the Gaza Strip. The decree abolished Decree No. 18 of 2007, which exempted all citizens in the southern governorates from paying taxes and customs fees.

Louay Hanash, the director general of the Customs, Excise Duties and VAT division at the Finance Ministry, told Al-Monitor, “The Ministry of Finance sent to the Israel Customs Administration a list of goods indicating the new increased customs duties to be imposed as of Jan. 14 in the West Bank and the Gaza Strip.”

Hanash said, “Under Annex IV of the Paris Protocol signed between the Palestinian Authority [PA] and Israel on April 29, 1994, the Palestinian Ministry of Finance may request the Israel Customs Administration to increase customs duties on imported goods and can collect the proceeds of this hike as part of customs clearance revenues.”

The Paris Protocol has placed Israel and the PA in a single customs envelope. Thus, Israel collects customs duties on goods imported to Palestine through Israeli ports. At the end of each month, Israel transfers to the Ministry of Finance the clearance revenues.

Hanash added, “The decision to increase customs duties aims to protect locally manufactured products by hiking taxes on imported goods. This includes the shoemaking industry that is flourishing in Hebron and the furniture industry concentrated in Nablus. The customs hike on imports will increase local market sales by 30% in 2018.”

A source in the Ministry of Finance told Al-Monitor on condition of anonymity that by increasing customs duty in all Palestinian territories and abolishing tax exemption in the Gaza Strip, the PA is seeking to increase its customs clearance revenues by 30% to offset its budget deficit that climaxed to $1.07 billion in 2017.

“This comes in the wake of the US administration's threat to cut financial aid to the PA,” the source added. “The customs duty hike on the goods stated in the ministry’s list will generate $100 million per year allocated to fill the budget deficit. Also, as a result of the abolition of tax exemption in Gaza, the PA Treasury will receive $350 million.”

In an earlier statement for Arabi21 website, on Jan. 10, Osama Nofal, the director general of studies and planning at the National Economy Ministry in Gaza, said, “The PA collected $720 million in clearance revenues from the Gaza Strip last year while the exemption was still applied. When taxes are reimposed in Gaza, the PA's revenues will rise by 35% and jump to about $1 billion a year.”

Hebron is famous for its shoemaking and tanning and leather manufacturing industries. The city produces around 4 million pairs of shoes annually, with high-quality products exported to Israel and European Union markets. The shoemaking industry employs around 6,000 workers and contributed in 2013 1% to the Palestinian total gross domestic product (GDP), according to statistics by Palestine Trade Center (PalTrade). The garment and textile sector is considered one of the priority economic sectors in Palestine, contributing 2% to the total GDP, with an annual average growth rate of 2.3%. In a 2015 report PalTrade indicated that “this sector forms 6% of the industrial sector as a whole in Palestine, with 1,942 manufacturers and 12,000 workers.”

Commenting on the hike on customs duties, Khalil Rizk, the chairman of the Palestinian Federation of the Union of Chambers of Commerce, Agriculture and Industry, told Al-Monitor that the Ministry of Finance informed the union of customs modifications without holding any meetings or consultations with it.

“We reject this policy in making decisions, because increasing customs duties will significantly raise the production cost of local industries,” he said. “This will affect the sales and cause major financial losses that may lead to the closure of some local establishments that will see their market share shrinking. The Palestinian economy is battling harsh crises, manifested by a plunge in per capita income and an increase of trade deficit with Israel.”

Rizk said that the Ministry of Finance ought to financially support the local industrial sector and reduce rates of taxes and fees levied annually.

Khaled Wafi, the owner of Khaled Wafi Furniture Co. in Khan Yunis, told Al-Monitor, “The Ministry of Finance’s decision to raise customs duties will raise the cost of production borne by the furniture industry where the largest proportion of the needed raw materials are imported. The Palestinian market is dealing with an unprecedented recession, reflecting on the activity and sales of our company. In 2017, sales amounted to $30,000 compared to $70,000 in 2016 and $85,000 in 2015.”

In turn, Moin Rajab, an economics professor at Al-Azhar University in Gaza, told Al-Monitor, “The PA is hit by a large financial deficit due to the drop in grants and foreign aid. This could get worse if the United States cuts its financial aid, which amounted to $285 million in 2017.”

Rajab fears countries will follow in the steps of the United States and slash aid to the Palestinians. He noted, “The PA is trying to compensate for its budget deficit by increasing local revenues from customs and taxes. However, the Palestinian economy — crippled by numerous challenges — cannot afford to see the budget deficit filled at the expense of the industrial sectors. The collapse of the industrial sector would increase the already-soaring unemployment rate.”

The coming days may reveal the impact of the customs duties hike on furniture, footwear, clothing and aluminum. Is this decision aimed to protect local industries or increase revenues for the public treasury amid the decline in grants and foreign aid?