After taking over administrative control of the Gaza Strip, President Mahmoud Abbas has abolished tax exemptions in a bid to get more revenue from Gaza to balance expenses, disregarding the harsh economic conditions in the besieged enclave. 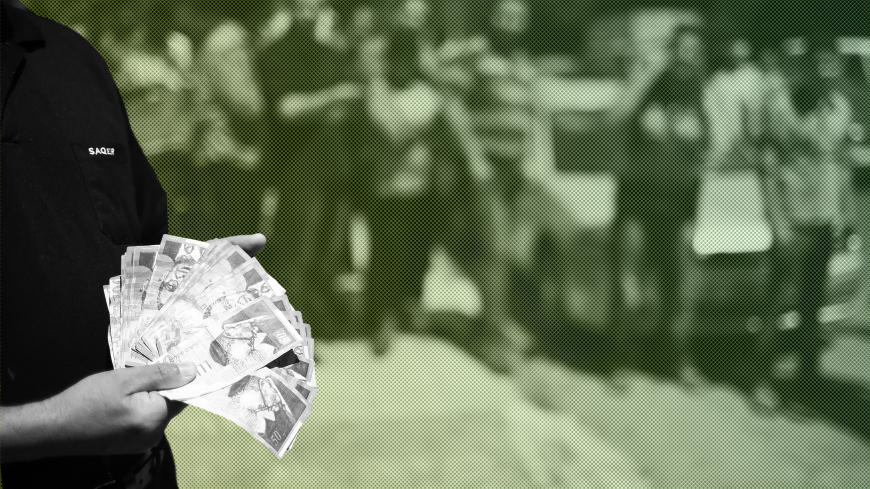 A Palestinian employee paid by the Palestinian Authority shows money to the camera after withdrawing cash from an ATM outside a bank, Gaza City, Gaza Strip, June 11, 2014. - REUTERS/Mohammed Salem

GAZA CITY, Gaza Strip — President Mahmoud Abbas issued a presidential decree dated Jan. 3 to reinstate the collection of taxes on the Gaza Strip. This decree abolished two previous decrees — one issued in 2007 and another from 2017 — exempting all citizens in the governorates of the Gaza Strip from paying taxes and fees.

Article 3 of Abbas’ freshly issued decree states that the decree shall be submitted to the Palestinian Legislative Council in Ramallah and put to a vote in order to be endorsed at a future session.

The taxes to be reimposed in the Gaza Strip include the 17% Value Added Tax (VAT) on imports, the 20% income tax imposed on companies, the income tax on citizens, and other local taxes and levies such as the property tax and the tax on cigarettes. This is in addition to the increase in customs duty.

The PA relies on local taxes as a source of funding of its expenses, including income tax, VAT and property tax. The proceeds collected from these taxes account for 25% of the PA’s total revenues and are estimated at $1.1 billion annually.

Economic expert Mohammed Abu Jiyab is the editor-in-chief of local Al-Iqtisady newspaper, which was the first to report the news of the reimposition of taxes on Gaza. He told Al-Monitor, “The decision to raise fiscal revenues was taken according to the legal rules set by the Ministry of Finance in Ramallah without taking into consideration the collapsing economy in the Gaza Strip. This decision will be directly reflected in all types of goods and services provided by private sector institutions, especially telecommunications and electricity companies. It will also increase the income tax.”

Abu Jiyab explained that the decision comes amid a sharp decline in public spending and an acute cash crisis in the Gaza Strip. “The Rami Hamdallah government is seeking to provide spending allocations for the Gaza Strip from revenues collected in Gaza by raising the fiscal revenues without relying on any funds received from outside the besieged enclave. This is a recipe for bankruptcy,” he added.

“Abbas is well-aware that this will not increase the revenues of the PA and its Ministry of Finance as much as it will worsen the economic and psychological burden on Gaza’s citizens.”

After the signing of the reconciliation agreement on Oct. 12, 2017, the Palestinian government in Ramallah took several measures to increase its fiscal revenues at intermittent intervals. The PA had improved its tax collection on goods entering Gaza through the Kerem Shalom crossing in the southern Gaza Strip. It also increased the price of Egyptian fuel and cigarettes.

Mohammad al-Ashi, a professor of finance at the Islamic University in Gaza, told Al-Monitor, “Ever since the government of consensus took administrative control over the crossings of the Gaza Strip, customs tariffs increased threefold compared to the tariffs applied by Hamas. This slashed by more than half the number of trucks making the crossings daily to the Gaza Strip, falling from a daily average of 700 to 300 trucks.”

Ashi pointed out that farmers would suffer the most from the reimposition of taxes, which will increase the price of chemical and agricultural products and thus the cost of production. “The decision will increase by 16% the bill paid by citizens to phone and internet companies,” he said.

It should be noted that the decision that was taken by the consensus government on Nov. 6, 2017, to unify the license fees for owning a new diesel car between Gaza and the West Bank has yet to be applied. The license fee is still 2,100 shekels ($614) in Gaza compared to 660 shekels ($193) in the West Bank.

In an earlier statement for Arabi21 website on Jan. 10, Osama Nofal, the director general of Studies and Planning at the National Economy Ministry in Gaza, said, “The PA collected $720 million in clearance revenues from the Gaza Strip last year while the exemption was still applied. When taxes are reimposed in Gaza, the PA's revenues will rise by 35% to about $1 billion a year, excluding the excise tax on industrial diesel whose revenues are annually allocated to the Gaza power plant."

Meanwhile, Riyad Halasan, an economic researcher at the PLO’s Palestinian Planning Center, said, “Taxation is generally in the citizens’ best interest, but the Gaza Strip lacks a stable environment allowing the state to use fiscal revenues to finance citizens’ services.”

He told Al-Monitor, “The alternative is to revive the Gaza Strip economically by adopting government policies aimed to increase employment rates, break the siege on the freedom of movement of individuals and goods, ensure an investment-friendly environment and give citizens their financial rights without any deductions.”

It seems that the national unity government is imposing new fiscal policies on the Gaza Strip after the Palestinian reconciliation agreement. This, however, is not coupled with any measures to improve the economic situation in the enclave.

The sanctions imposed by Abbas against Gaza have yet to be lifted. This is likely to fuel protests and popular strikes threatening the Palestinian reconciliation.