Palestinian President Mahmoud Abbas issued a decree exempting Gazans from fees for services that the Palestinian Authority provides, and that the Hamas-run treasury collects. 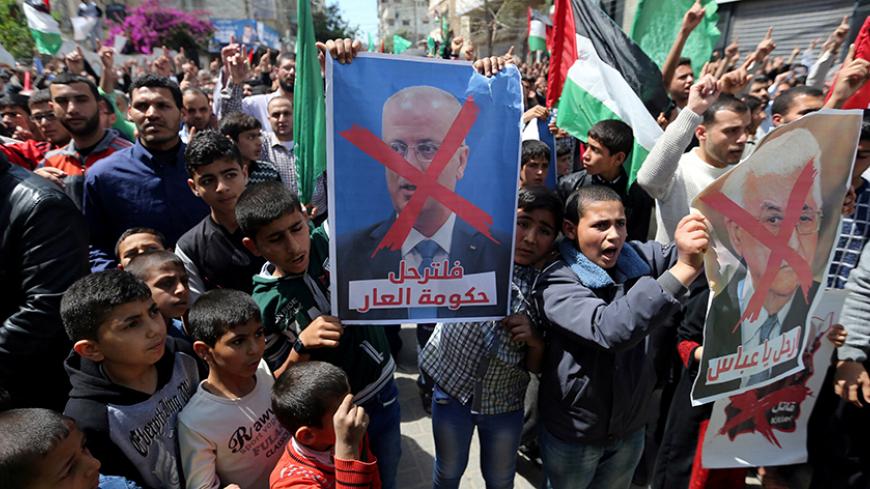 GAZA CITY, Gaza Strip — In a new move to clamp down on Hamas in the Gaza Strip, Palestinian President Mahmoud Abbas issued a presidential decree April 20 exempting Gaza citizens from the fees of services rendered by the ministries, institutions and bodies affiliated with the Palestinian Authority (PA). The decision includes first-time service fees, which go to the treasury of the Hamas-run Ministry of Finance in Gaza.

The decree covers nine articles, exempting income tax on companies and individuals, imports of goods from abroad, purchases and sales under the clearing bills, professional licenses for companies licensed in the southern governorates (the Gaza Strip) and working in the northern governorates (the West Bank) — all of which go to the treasury in Ramallah.

A similar decree was issued by Abbas on June 26, 2007, following Hamas’ takeover of the Gaza Strip, by virtue of which Gaza citizens were exempted from service fees, with the purpose of restricting Hamas’ rule. However, Abbas found no way to implement the decree on the ground in light of Hamas’ control over the Gaza Strip. In this context, government officials in Gaza expect the same to happen with the newly issued decree.

Tariq Rishmawi, a spokesman for the government of national consensus, told Al-Monitor that high-ranking government officials — whose names remain anonymous — instructed spokespersons not to comment on the presidential decree. But he said, “The de facto authority in Gaza [Hamas] prevents the government from providing its services to the citizens.”

Nasser al-Jaiyan, the deputy director general of the Customs, Excise Duties and VAT division at the Ministry of Finance in Ramallah, told Al-Monitor the purpose of the presidential decree is to alleviate the hardship of the Israeli blockade on the Gaza Strip.

He stressed that any tax taken from citizens in Gaza by the Hamas government institutions after the issuance of the presidential decree are funds taken illegally.

On May 10, the head of the financial department in the Administrative Committee in Gaza, Yousef al-Kayali, told al-Ray government agency that the presidential decree will not be implemented, noting that the decree targets Gazans only so as to deprive the Gaza treasury from tax funds, while citizens of the West Bank were not affected by the decree so as to keep funds flowing into the treasury in Ramallah.

Kayali ruled out the possibility of the presidential decree's having a negative impact on local revenues due to the commitment of citizens and merchants to pay these taxes, noting that the PA’s talk about the illegality of tax collection in Gaza comes in the context of political rivalries.

He added that the decree will not be applied because it is not legitimate since it was not presented to the Palestinian Legislative Council for approval. In addition, he explained, it aims to increase pressure on government institutions in Gaza by targeting their local revenues.

On May 8, Louay Hanash, the director general of the Customs, Excise Duties and VAT division at the Finance Ministry in Ramallah, said in a press statement that the Ministry of Finance in Gaza collects from citizens about 70-80 million shekels ($19.3-$22.1 million) in taxes per month. Yet the Gaza ministry claims the Ramallah ministry collects $100 million a month from Gaza, most of which are taxes from goods entering the Gaza Strip.

On two separate occasions, April 12 and May 5, Abbas threatened Hamas in Gaza with harsh and unprecedented measures aimed at forcing the movement into canceling the Administrative Committee it set up to run Gaza and enabling the government of national consensus to work freely in the Gaza Strip, in addition to holding presidential and legislative elections.

Meanwhile, Hamas stressed that the Administrative Committee would be considered dissolved the minute the government of consensus assumes its functions in Gaza.

Nasr Abdel Karim, a professor of economics and finance at Birzeit University, told Al-Monitor that he does not expect the decree to have any actual impact in the absence of the Palestinian government in the Gaza Strip, saying that the decree is part of a series of actions taken by Abbas to pressure Hamas in Gaza and drain the sources of local funds benefiting the institutions of the Hamas-run government.

Abdel Karim believes Abbas will carry on with additional punitive measures against Hamas, warning about such action affecting Gazans as well, since it is difficult to separate the people from the movement. For instance, deductions from the salaries of public employees in Gaza harmed the staff more than the movement itself, and so did depriving Gaza of electricity. In this context, the PA asked Israel in late April to stop deducting Gaza’s monthly electricity bill from the Palestinian clearing funds, which Israel refused to do. It continued to supply electricity to Gaza for fear of the security situation getting out of hand.

He said a combination of such measures could affect the Hamas government’s financial resources in the Gaza Strip, and thus affect the operating expenses of ministries and salaries of their employees, in addition to damaging the struggling Gazan economy in general and depriving Gaza of cash flow.

Mouin Rajab, an economics professor at Al-Azhar University in Gaza, concurs with Abdel Karim’s view on the Palestinian government’s inability to implement the decree in Gaza since it lacks authority there. He believes the only way this decree could be implemented is if the Palestinian internal division ends and the government of consensus is enabled in Gaza.

“Regardless of how satisfied citizens may be — given how this decree relieves them of part of their financial burden — they will not be able to abide by it because they believe the government authorities in Gaza will not provide them with services free of charge, because the [Hamas-run government] has announced that the decree will not be applied in Gaza,” Rajab told Al-Monitor.

Although economic experts are convinced of the difficulty to implement the decree in the Gaza Strip, the citizen remains the weakest link and the biggest loser in the 10-year political conflict between Fatah and Hamas.