The Palestinian government has decided to kick-start its economic disengagement plan from Israel in the city of Hebron. 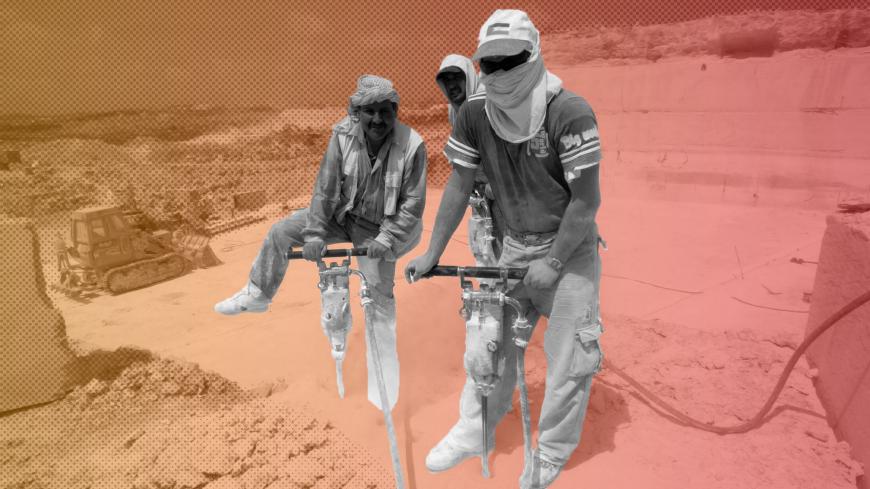 Palestinian laborers use jackhammers at a quarry in the West Bank village of Shioukh, close to Hebron, West Bank, April 10, 2007.

GAZA CITY, Gaza Strip — Ever since Mohammad Shtayyeh assumed the post of prime minister of the Palestinian government on April 13, the government has been focusing on economic disengagement from Israel in the next few years.

To this end, the government has taken several measures in the city of Hebron in the southern West Bank, including a cooperation agreement that was signed July 2 between Minister of Labor Nasri Abu Jaish and head of the Hebron Chamber of Commerce and Industry Abdo Idris, in order to create new jobs by supporting a series of entrepreneurial and innovative ideas and funding them across the city.

On the same day, the government agreed to classify the Jaramoura industrial zone in the town of Tarqumiyah, southwest of Hebron, as a special industrial zone.

Minister of National Economy Khalid al-Osaily had revealed his ministry’s intention to adopt special regulations on the establishment of industrial cities, offering certain advantages in order to expand the productive base and attract more investments that achieve economic development. On May 30, Osaily announced the establishment of a holding company of a $100 million capital, with the participation of businessmen and investors from Hebron to invest in various productive economic sectors.

Among the measures approved by the Ministry of Economy for the establishment of industrial zones is forming a unified investment facilitation for industrial licenses that will simplify the relevant procedures in obtaining the necessary licenses, in addition to consolidating reliance on renewable energy and encouraging its use in production inputs and benefiting from the investment incentives available in this field.

Spokesman for the Ministry of National Economy Azmi Abdel Rahman told Al-Monitor that Hebron constitutes economic leverage for Palestine. “The city has an approximate 40% contribution to the gross domestic product. Therefore the Ministry of National Economy — under the instructions of the prime minister — is seeking to create an integrated economic model in the city that enjoys full independence from the Israeli economy. The aim is to mainstream this model across cities in the West Bank and ultimately achieve the planned full economic disengagement from Israel within three to five years.”

The ministry also prepared a plan to develop the industry and trade sector in the city by providing facilities for local and foreign investments. It granted any new enterprise to be opened this year a one-year income tax exemption as of August amounting to 15%-20% of the enterprises’ total revenues, in addition to the 16% value-added tax.

The ministry also devised a plan to overcome the obstacles facing investors in Hebron by assuming all administrative procedural tasks related to new enterprises, such as licensing before the various departments at the municipalities, the competent ministries, and chambers of commerce and industry.

The city of Hebron is located in the south of the West Bank with a population of around 743,000. It stands as the backbone of the Palestinian economy contributing 40% of GDP in 2017. Hebron is also the home to 1,500 marble and rock facilities employing 20,000 people and contributing to one-third of Palestinian exports, with reserves worth $30 billion. The city has agricultural wealth with 36,000 dunams (8,896 acres) of arable lands. Hebron contributes to 60% of the gold production in Palestine and is famous for its leather and shoe industry. It houses 230 shoe factories employing 6,000 people and producing 1 million pairs of shoes each year.

The city has 3,200 industrial and handicrafts facilities, 200 of which specialize in ceramics, employing 28,000 workers, with sales of up to $3 million. Hebron city is also home to 16 pottery factories employing 96 workers, in addition to its glass, clothing, concrete, iron, aluminum and home furniture industries.

Al-Monitor spoke to a member of the board of directors of the Chamber of Commerce and Industry in Hebron, Salah al-Jaabari, who said that Hebron enjoys the human and financial resources needed to successfully achieve the government’s plan to break away from the Israeli economy.

However, he noted, “It is necessary for the government to find a solution to the salary crisis of Palestinian Authority employees who have been receiving only 60% of their salaries for several months. This has negatively affected the purchasing power of citizens and led to a decline in sales of local companies operating in the city.”

The director of Al-Zahraa footwear factory, Musaab al-Qawasmi, told Al-Monitor that the industrial sector in the city is still suffering amid Israel’s control over the volume of raw materials needed for the manufacturing process. He said, “This impedes the production expansion plans of the private sector and traders. The government must take into account the fierce competition in prices imposed by Israeli, Chinese and Turkish companies to spare Palestinian traders the risk of bankruptcy.”

Bilal al-Falah, director of research at the Palestine Economic Policy Research Institute - MAS, believes the government has chosen Hebron to kick-start the development of the industrial and commercial sector as part of its plan to implement economic disengagement. “The city has a large handicrafts sector — including value-added industries — such as leather, footwear, pottery and glass. Also its private sector and citizens have substantial financial savings in banks exceeding $1 billion. This amount can serve as an investment capital that can be built on for launching the economic disengagement project,” Falah told Al-Monitor.

Falah argued, however, that economic disengagement from Israel should be applied in tandem with a plan by the Palestinian government to attract Arab and international investments in Hebron and the other cities in the West Bank. He noted, “With the currently available financial resources, neither the government nor the private sector can afford to employ the large numbers of Palestinian workers inside Israel — accounting for 130,000 persons — in the Palestinian industrial sector.”

He concluded that Israel controls the barriers between Palestinian cities and the means of money transfers through banks, which discourages foreign investors from investing in West Bank cities.