Once boasting a thriving shoe industry, Hebron is struggling to compete with cheap Chinese imports and Israeli control of the economy, Jihan Abdalla reports. 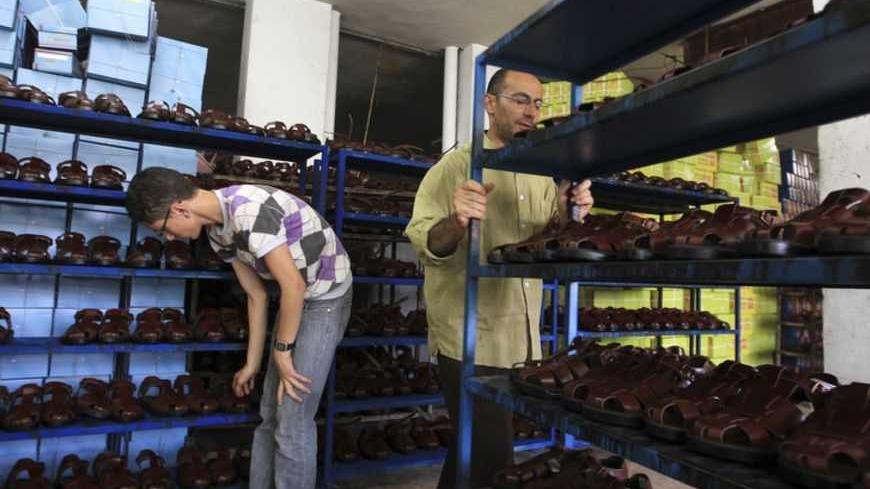 HEBRON, West Bank — Once a mainstay of the local economy, Palestinian shoemaking in the West Bank is in decline as businesses struggle to compete with an increasing influx in the local market of cheaper, Chinese-made shoes.

For decades, the city of Hebron was renowned for its skilled cobblers, producing famously comfortable, durable, leather shoes and sandals. According to statistics compiled by the Chamber of Commerce in Hebron, from 1970 until 1990, the city boasted 1,200 lucrative shoe businesses, employing 40,000 people, a third of Hebron’s residents at the time.

Now the sector is in shambles as — in addition to Israeli restrictions on exports — Palestinians are opting for more aesthetic, albeit lower quality, shoes made in China. There are now no more than 250 shoe factories still running, employing only 4,000 workers, according to the Chamber of Commerce.

Hebron, the largest Palestinian city in the occupied West Bank, with a population of 170,000, is famous not only for its shoes and leather, but also for dairy products, ceramic and glass-blowing industries. A major commercial and industrial hub, it contributes about a third of the West Bank's Gross Domestic Product.

But a wave of cheap Chinese goods was the last straw for businesses already battling Israeli measures that have inflated costs and hurt economic growth.

Omar Sayyaj, 37, partner at Tossetti Shoes Co. in Hebron, one of the companies still operating in the city, says his grandfather established their family-owned business back in the early 1960s.

“The shoe industry is not a profitable business anymore,” Sayyaj told Al-Monitor.

But the pressure to keep their business open is strong, he says, not least because many of his own family members are employed in the company.

“We have to keep the factory open because once you’re an expert shoe maker, you can’t do anything else.”

A World Bank report released on Tuesday said that Israel's checkpoints and restrictions in the West Bank inflict long-term damage on the Palestinians' ability to compete in the global market. And restrictive policies are causing a decline in the manufacturing and agricultural sectors, which have led to a high unemployment rate of nearly 25%, according to the Palestinian Bureau of Statistics.

The World Bank said that the share of exports in the Palestinian economy has been steadily declining, dropping from around 10% in 1994 to 7% in 2011 — one of the lowest rates in the world.

Sayyaj said his company would like to be able to rely more on the local market, but fierce competition with much cheaper, poorer quality imports that are popular among consumers is cutting them off from a key market, and slowly putting them out of business.

In 2011, Palestinians imported $4.2 billion worth of goods, $194 million from China, according to the Palestinian Bureau of Statistics. Officials say when it comes to shoes, almost 90 percent on the Palestinian market are imported from China. Only 8% of shoes on the shelves are locally made.

Shop-owners say local shoemakers have not kept up with changing consumer tastes, or the latest styles and models.

“My customers come to my shop looking for the latest brand shoe, or something that looks like it,” says Ahmad Dandis, owner of a shoe store in Hebron.

“If I don’t have it, they will go elsewhere,” he says.

The shoes in his shop sell for anywhere between $13 and $21, the majority imported from China. He only sells a few locally made models, selling for $25-$30 a pair.

Owners of shoe companies say the difficult economic conditions for Palestinians have driven consumers to purchase cheaper options, but that ultimately, consumers will have to spend more money on their made in China shoes since they wear out much faster than the local product.

Palestinian tradesmen say the cheaper Chinese imports have destroyed their ancestral craft and are demanding the Palestinian Authority impose stricter laws to protect and support their dwindling industry.

In response, on Tuesday, the Palestinian Authority decided to impose a 35% additional levy on Chinese imports.

“With the aim of protecting local products, as well as to institute principles of fair competition and in order to collect real revenues, the Cabinet decided to introduce an additional tax of 35 percent on products imported from China starting 15 April 2013,” the government said in a statement.

Tareq Abu al Filat, head of the Union of Leather Productions in Hebron, welcomed the decision, saying they have been demanding it for over four years. If implemented, he says thousands of jobs could be generated.

Most shoe businesses are small, family owned and with limited means that cannot substantially compete in foreign markets, he says. Therefore, the main market must be the Palestinian one.

At the Tossetti shoe factory, a dozen workers are working on an order of boys and girls sandals ahead of the summer season, destined for Israel. Bright pink soles with white straps for girls, and black soles with blues straps for boys. Sayyaj proudly shows off the elements of his shoes that make them both durable and healthy for feet.

But lacking the capital to buy new molds to produce more varied, modern and colorful shoes every season in keeping with young people’s taste, Sayyaj said they focus almost exclusively on children’s sandals and men’s dress shoes. Competition remains strong, nevertheless, even among the local companies in Hebron, keeping their prices low, and their prospects for the future lower.

Even Sayyaj contends that in this day and age, where appearance is the main criteria, a drastic change has to be made in order for the Palestinian shoe industry to march forward.

“My own son wants a shoe like his favorite soccer player Cristiano Ronaldo, but how can I make him one?”